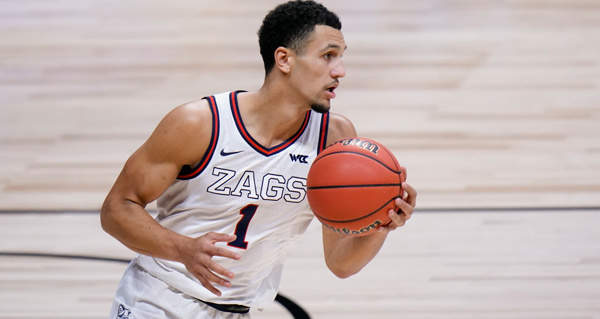 Jalen Suggs was the sixth-ranked prospect in the 2020 high school class [1] and is currently ranked third on ESPN’s top 100.

In his one season at Gonzaga, the six-foot-four lead guard averaged 19.9 points per 10 minutes on 59.5% True Shooting and assisted on 23.5% of his team's scores when he was on the floor (868 minutes), as the top player on a team that won 31 of its 32 games and placed second in the NCAA Tournament.

He’s been a well-known prospect for quite some time, given his 277 minutes of FIBA experience defending the United States at the 2017 U17 Americas Championship, the 2018 U17 World Cup and the 2019 U19 World Cup, but took a step forward in prominence in Spokane, as he was given more of an opportunity to shine on offense.

Suggs is naturally inclined to speed up the pace of the game, not just in terms of pushing the ball up the court himself but passing ahead to wingers running past him as they fill up the lanes. It’s fair to say he was the main driver behind Gonzaga ranking third in the country in percentage of field goal attempts coming in transition and second in effective field goal percentage in such instances [2].

He was also the top threat off the dribble for an offense that finished first in the country in adjusted offensive efficiency [3]. Gonzaga largely ran a well-spaced motion offense that often put him in a good position to succeed attacking off balance defenders and help defenders in scramble mode, but the 20-year-old also proved his worth as a shot creator against a set defense late in the shot clock.

On the other end, he was not relied on to defend the point of attack much, due to the presences of Joel Ayayi and Andrew Nembhard, but impressed with his engagement off the ball and was an asset creating events for a defense that finished 11th in adjusted defensive efficiency and 23rd in percentage of opponents’ shots in transition.

Gonzaga often put him in a position to succeed, in terms of attacking scrambling defenses after meaningful and effective ball movement.

Nonetheless, when forced to take his man one-on-one, Suggs showed a somewhat diverse set of skills to act as a threat to score in volume in isolation.

He doesn’t have a lightening quick first step but is capable of going by his man with a combination of head-fakes, hesitation moves, and spins – getting all the way to the rim on 49.8% of his live-ball attempts [4] and earning 5.3 free throws per 40 minutes.

Suggs was not kept away from the most valuable areas often, taking just 16.3% of his field goal attempts from mid-range, but proved himself capable of acting as a real threat to score away from the rim, constantly managing to create separation via step-backs and side-steps – hitting 17 unassisted three-pointers in his 30 appearances and canning 42% of his 50 two-point jump-shots last season.

The Saint Paul, Minneapolis native can attack either side of the pick, has a knack for using or rejecting the screen, is able to split double teams at the point of attack and impressed with his patience snaking his way around to get to his spots off the ball-screen.

He is a threat to score away from the basket via pull-back three-pointers, step-back jumpers hiding behind the pick and two-dribble pull-ups in side pick-and-roll, has the dexterity and the touch to launch floaters off a jump-stop from the in-between area, and got all the way to the rim in volume off turning the corner.

Suggs is an explosive leaper off one foot with a head of steam behind him, can hang and adjust his body in the air, is capable of finishing through contact and on his way down, and is adept at going to his left hand around the basket – converting 64.1% of his 153 shots at the rim last season.

He is not a refined passer off the bounce and turned the ball over on almost a fifth of his possessions but can make basic reads off drawing the help and deliver to the roll man with good timing with jump-passes over the top or pocket passes.

In a team with multiple ball-handlers and one of the top post scores in college basketball, Suggs didn’t have the chance to monopolize possession of the ball as much as you’d expect to for someone who will end up drafted in the top five – despite logging a healthy 24.8% usage rate.

As a result, he had a fair number of opportunities to prove his worth away from the ball.

Suggs has shown to be a smart cutter, attacking space behind the defense on the weak-side and offering himself as a target to play above the rim as a target for lobs – assisted on 30.6% of his 98 makes at the basket.

He is a capable shot-maker on spot-ups but not much more than just that and, despite the occasional long-range bomb coming to the ball for a hand-off or drifting around the wing, hasn’t yet developed a whole lot of versatility to his release – hitting just one-third of his 104 three-point shots last season, at a pace of 4.8 such attempts per 40 minutes.

Suggs really impressed with his effort running back in transition, acting as a legit threat to pick up chase-down blocks here and there.

As mentioned previously, he was not Gonzaga’s primary on-ball defender but still managed to contribute to one of the best defenses in college basketball.

Though not always in a stance, Suggs was consistently engaged away from the ball. He put in the effort to leverage his combination of size and athleticism in ball-denial, chasing around screens and disrupting dribble-handoffs.

In the strong-side, despite his unimpressive six-foot-four wingspan for someone with his height [5], he was often seen playing with active hands executing stunts, while trying to clog driving lanes or deflect passes – averaging 2.6 steals per 40 minutes.

Suggs was an asset to help double post-ups and flashed impressive awareness for abandoning his man to overwhelm the opponent with the ball late on the shot clock. He also wowed with his disposition for boxing out bigger players while rotating in to help crowd the area near the rim.

Against the pick-and-roll, Suggs put in the effort to try standing in the way in a timely manner against the roll man, especially in high leverage moments (as evident in the Final Four), picked up the occasional block contesting at the rim (averaging 0.5 blocks per 40 minutes, a solid enough mark for a guard) and proved himself a very good rebounder for someone his size (collected 18% of opponents’ misses when he was on the floor).

When he did find himself defending on the ball, Suggs wasn’t quite the ace defender he was expected to be, given his previous performances with the United States junior squad, but held his own reasonably well against the level of competition he faced in college.

Against the pick-and-roll, he bends his knees to get down in a stance, gets skinny over screens at the point of attack fairly well for someone his size, hustles in pursuit, and makes an impact contesting from behind.

His energy in isolation is a bit of a mixed bag, in the sense that there were moments he didn’t press up and didn’t seem likely to chest up to contain dribble penetration through contact, but at his best, Suggs heat up opposing smaller guards and constantly looked to reach around for strips.

He wasn’t asked to pick up bigger players on switches regularly but given the stature and the skillsets of the players around him, Suggs had to pick up some slender wings from time to time and held his own, in terms of managing to stay in front, though not enough to suggest he should be expected to become an option to crossmatch regularly into the most physical big wings seen in the pros.

[3] According to Ken Pomeroy

[5] According to Draft Express