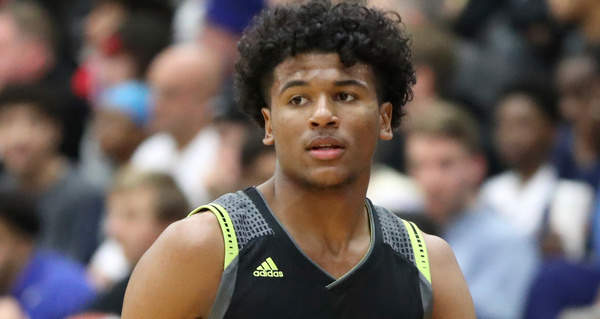 Jalen Green was the top-ranked prospect in the 2020 high school class [1]. But instead of taking the most common routes of signing with an NCAA program or the Australian NBL’s Next Stars initiative, the six-foot-five gunner became the most prominent prospect to date to join the G-League, as part of the new program under the league’s control designed to bridge the gap between high school graduation and the NBA Draft.

It is a bit unclear how the newly named Ignite will be integrated into the G-League season in a normal year, but the pandemic actually helped for this first campaign of the project. As the NBA opted to play the entire season in a one-month span at the Disney campus and not every franchise sent a team, the Ignite were just a normal participant.

There were also some doubts about how a program specifically built for four players (Green, Jonathan Kuminga, Daishen Nix and Isaiah Todd) would approach distribution of roles and opportunities in a real basketball setting, but they were answered in a very satisfying manner, in my opinion. The Ignite were, once again, just a normal participant.

Green's presence in the starting lineup was clearly a priority for the team. But nothing out of the ordinary with what you tend to see with teams taking a more developmental route at the expense of short-termed winning. The playing time, while probably somewhat fixed, didn’t feel especially gifted. The team was a negative with him on the floor, but he averaged 22.4 points per 40 minutes on 61.3% true shooting.

The 19-year-old had a number of opportunities to create against a set defense and had plays designed to get him open to launch long-range bombs run for him but logged a normal 23.2% usage rate and didn’t run point for extended periods because he hasn’t yet developed into a reliable shot creator for himself and others on an every-possession-basis.

The team gave him plenty of opportunity to “explore the studio space”, as Nate Duncan likes to say, highlighted by his iffy turnover rate and his inefficiency from midrange, but didn’t make a mockery out of the process by having him out there do something he isn’t qualified to do at a basic level against pros.

On the other end, the third-ranked prospect on ESPN’s top 100 had impressed with his tenacity in a more 3&D role with the United States junior squad at the 2019 U19 World Cup, but doesn’t seem to have kept the same level of focus since his status as a scorer grew larger. He is now more likely to become someone who will need to be hidden on defense in the near future than any sort of an asset, on or off the ball.

Green has evolved from a gunner on the United States junior squad that won the 2019 U19 World Cup to an off-dribble scorer in the past couple of years with Prolific Prep and the G-League Ignite, impressing the most with his resourcefulness in isolation.

He uses shot-fake to bait the defender into a false step, can create separation to pull-up from mid-range via step-backs and side-steps, is able to get by his man via hesitation moves, quick spins and hang dribbles, and even showed legit three-point range on step-back pull-ups off low crossovers and between-the-legs crossovers (even if just one-fifth of his three-point makes were unassisted [2]).

But Green is only so-so getting by more physical defenders, including big men on switches. He was able to blow by stiffer types on a straight line via the quickness of his first step but struggled some against more athletic types who could keep pace with him and then apply strength to press up.

The Fresno native is not yet comfortable playing through contact due to his slender 178-pound frame in the context of his six-foot-five height and averaged 3.3 turnovers per 40 minutes as a consequence.

He is not yet an advanced operator in middle high pick-and-roll but flashed an expanding bag of techniques coming off ball-screens; the court vision to snake his way around to the rim against slower opposing big men extending above the foul line, glimpses of smart circling back to use re-screens and an impressively quick first step declining picks.

Green has shown to be a very promising finisher for someone his age, in large part due to his athletic prowess. He can go up with power off one foot with a head steam, maneuver his way through tight spaces and hang or adjust his body in the air while maintaining a position of strength in terms of balance to dunk or lay it in.

The Prolific Prep graduate doesn’t yet seem comfortable and confident going to his left hand around the rim and needs to develop some more core strength to complete more of the acrobatic finishes he attempts around a rim protector parked between him and the goal, but nonetheless converted 73.6% of his 61 attempts at the basket [3].

Green wasn’t very productive in terms of getting to the foul line, though. He took 29.9% of his live-ball attempts at the rim – at a pace of 5.0 such shots per 40 minutes – but earned just 2.9 free throws per 40 minutes. His 17.5% free throw rate is the fourth-lowest mark among all players ranked on ESPN’s top 100.

He played with a higher degree of speed on side pick-and-rolls, especially in terms of getting to his spots for comfortable one- and two-dribble jumpers. But he hasn’t yet developed a floater to act as a threat to score from the in-between area on the run and struggled to create good separation stopping on a dime with a defender in his hip, thus struggling with his efficiency from mid-range – hitting just 31% of such looks.

Green is also somewhat unrefined with his touch passing off a live dribble. He can deliver reasonably well-timed pocket passes on pre-arranged reads and hit the roll man over the top in the right window against basic help defense principles but can’t be relied on to be the main shot creator for others in a lineup at this point of his development – assisting on just 13.5% of the Ignite’s scores when he was on the floor.

Green didn’t really stand out as the most intuitive of cutters, but he is a real threat to attack space that needs to be accounted for constantly by the defense, as he is able to play above the rim as a target for lobs in transition and on backdoor cuts – with 46% of his two-point makes assisted.

However, the bulk of his contributions away from the ball are usually born out of three-point range. Green didn’t have the versatility of his shooting highlighted with the Ignite, so it’s unclear how much of a threat he can be coming off screens or sprinting to the ball for handoffs, but he proved himself a reliable threat to hit open jumpers on spot-ups and drifting around the wing on plays designed to get him jogging into a free shot.

His best attempts look quite pure, as he elevates off 1-2 footwork with great balance, gets great elevation, fully extends himself for a high release, has a quick trigger and consistently gets a good arc under his shot.

Regularly pulling the trigger with confidence, Green took 41.5% of his live-ball attempts from three-point range and hit these 85 long-range bombs at a 36.5% clip, at a pace of 7.1 such shots per 40 minutes.

While he seemed like a tenacious on-ball defender with the United States junior squad a couple of years ago, Green is no longer expected to become an ace stopper. As he’s developed into more of an operator on the ball on offense, the level of demand for commitment defending on the ball has dropped, as it tends to be the case with off-bounce scorers as their status grow larger.

He hunches more than bends his knees getting down in a stance and, though he has shown decent lateral movement sliding one way to stay in front of average threat in terms of speed, the Adidas Gauntlet circuit alum doesn’t apply physicality in his slides, unlikely to chest up and contain dribble penetration through contact, in large part because he doesn’t have the strength for it just yet.

He wasn’t asked to check many pick-and-roll ballhandlers but when called upon, Green did put in decent effort attempting to go over the screen and hustling in pursuit to bother a shot from behind.

As is the case with most teenagers, he is also only so-so off the ball.

While quick, Green didn’t impress with his navigation of screens chasing shooters around the floor and his closeouts were generally unimpressive for the most part; ineffective in his contests and rarely managing to run the shooter off his shot successfully. It was also uncommon to see him apply his athleticism in attempts to disrupt handoffs.

His main area of contribution was jumping passing lanes, where he averaged 1.9 steals per 40 minutes, but he also seemed reliable enough to execute the scheme about well enough.

Green is unlikely to make much of an impact in the hidden areas of the game for now but puts in the effort to rotate off the weakside to pick up the roll man. He is not a threat to block shots but can stand in the way and guards with his arms up near the rim, at least forcing the opponent to have to apply some resource to score around him.

Green somewhat disappointed on the boards, though, showing a lack of engagement for mixing it up under the rim, even if only to chase the ball as the veterans did the dirty work of boxing out – collecting just 11.6% of opponents’ misses when he was on the floor.