Marcus Smart: Why College Coaching Even Matters For Top-5 Picks 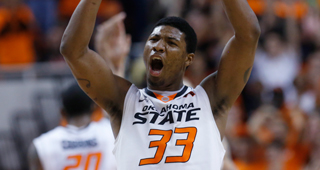 - The following is an excerpt from Jonathan Tjarks' e-book about the NBA Draft that can be purchased for just $3.99.

Marcus Smart just lived through the worst possible timeline at Oklahoma State. Everything that could have went wrong when he decided to return to school, went wrong. His team collapsed, going from being ranked in the Top 5 to sneaking into the NCAA Tournament and losing in the first round. Things got so crazy he actually went into the stands in a game at Lubbock. He was in a very dysfunctional situation, which you have to take into account when evaluating him.

Smart’s stats improved slightly, but there wasn’t the quantum leap scouts look for in a player’s second year of school. Efficiency was the main knock on him as a freshman and he did little to settle those doubts, with almost negligible improvements in his field goal and three-point shooting percentages. The most encouraging sign was his assist-to-turnover ratio, which jumped from 1.26 to 1.84, an indication he improved as both a ball-handler and decision-maker.

If he were playing for John Beilein at Michigan, he would have had a much easier time racking up stats. Beilein runs a stable program and fits players into roles - he spreads the floor with 4 3-point shooters who can attack the rim and moves the ball from side to side. The situation at Oklahoma State was a little different. Along with Scott Drew at Baylor, Travis Ford has been doing less with more for years. This season, all his chickens came home to roost.

There’s no reason a team with Smart, Markel Brown and LeBryan Nash should have played that poorly and it speaks very poorly of Ford as a coach that it happened. He had a shocking amount of talent yet still managed to waste it. Those three guys could have played for any team in the country - they could have started at Kentucky. Oklahoma State’s annual disappearing act has hurt Brown and Nash’s chances of being drafted and it will cost Smart a lot of money.

Ford started the season with only one competent big man on the roster - Michael Cobbins. There are no waiver wires in college like there are in the NBA - a coach can’t just pick up a forward in the middle of the season. As a result, when Cobbins tore his Achilles in January, the team completely fell apart. The Cowboys were 12-1 with Cobbins and only 9-11 without him. A good coach has contingency plans on his roster, so he doesn’t end up in a situation like that.

Beilein lost Mitch McGary for the season, which is a significantly bigger loss than Cobbins. The difference is he had other big men who could play - Jon Horford and Jonathan Morgan. They weren’t world beaters by any stretch, but they could be trusted with minutes, unlike some of the stiffs Ford recruited. He was forced to play LeBryan at center for large stretches of the season and that was never going to work. You didn’t see Beilein playing GR3 as a 5.

Just as important, Beilein ran a consistent halfcourt offense with motion and ball movement. Ford’s offense, on the other hand, was basically controlled chaos. Oklahoma State had a 6-man rotation and they were dramatically undersized upfront - they were constantly playing from behind and they were trying to play as fast as possible. The end result was some very sloppy basketball, with Smart being asked to go 1-on-5 against a set defense too often.

Smart was shooting 30% from 3 and taking 5 a game. You don’t see that on a well-coached team. At a certain point, a good coach will tell a player that he doesn’t need to shoot that many 3’s at such a low percentage - there are other things they can do. Smart was regularly taking step-back off the dribble 3’s and there are maybe three guys in the world who can make that shot at a high percentage. He’s a decent shooter who thought he was Stephen Curry.

So while he’s not a great shooter by any means, he should be more efficient in a more structured offense. Smart doesn’t need to shoot 15-20 times a game to be a really good player at the next level. He’s a rare PG who can impact the game as a passer, rebounder and defensive player. At 6’3 225 with a 6’9 wingspan, he’s much bigger and more physical than most NBA PG’s. He had a 26.9 PER because he stuffs the stat-sheet - points, rebounds, assists, steals and blocks.

There are a lot of undersized SG’s who try to pass themselves off as PG’s - Smart is a PG with the size to play SG. There’s a big difference. A player like that is how you can have a two-PG starting line-up - the Suns can play Eric Bledsoe and Goran Dragic together for most of the game because Bledsoe can match-up with any type of guard in the NBA. Smart isn’t as athletic a Bledsoe, but he’s big enough to make up most of the difference on defense.

Smart is an ideal player for a rebuilding team because he can be successful next to any type of guard. You can play him next to a PG or next to a SG and still be sound defensively. While he lost some money on his first contract in the league, he should be able to make up for it in his second. He shouldn’t have rushed the stands, but what happened on the court had more to do with Ford. He’s a bad coach who is probably going to lose his job next season.

LeBryan Nash is the only big piece left from last year’s team and there isn’t a lot of talent in the pipeline behind him. Ford’s pipeline of McDonald’s All-Americans out of the Dallas area has dried up - when a mediocre coach’s recruiting starts to fall off, that is usually the kiss of death. If Smart had spent the last two seasons at Michigan or Kentucky or Kansas, he would be viewed differently. College coaching matters, even for players projected to go in the Top 5.

- This was an excerpt from Jonathan Tjarks' e-book about the NBA Draft that can be purchased for $3.99.