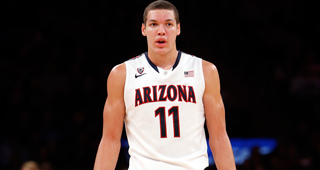 Watching Open Court on NBATV this week, I thought about Kenny Smith’s comment that a large portion of even great players in today’s NBA can do less things than their counterparts in earlier decades. While he may be exaggerating the difference in the eras, the league does do a better job maximizing the contributions and impact of imperfect players. More sophisticated coaching combined with rule changes have allowed more offense-only guys to stay on the floor and at least an anecdotal increase in minutes going to specialists.

An underlying factor behind these shifts could end up coming to the forefront with the 2014 draft class: the player’s impact has to be high enough to justify coaches and other players working around their flaws.

The Golden State Warriors often have Stephen Curry guard opposing swingmen to reduce his defensive workload and ideally keep his energy level up for offense.

The San Antonio Spurs have acted similarly at points using Danny Green, and part of Dwight Howard’s importance to the Houston Rockets' championship aspirations stems from his ability to clean up some of James Harden’s defensive lapses.

On the other hand, the Minnesota Timberwolves have done a poor job complementing Kevin Love’s shaky defense and the Memphis Grizzlies have consistently struggled to find perimeter shooting sufficient to stop opponents from clogging the middle to stagnate their offense.

Even in the case of a less dominant player, Boris Diaw’s career has ebbed and flowed with a combination of how well a team used his unique talent coupled with his own motivation.

In all of these cases, franchises from top to bottom had to make the conscious decision of whether changes in personnel, strategy, or both would help make the team perform better. Some players are clearly worth the effort but others make the choices much more difficult.

Here are a few potentially important individuals in the 2014 NBA Draft that will require some special attention from their NBA teams to flourish:

Aaron Gordon, F, Arizona: While we do not know for sure, Gordon could possibly be the poster child for these kinds of decisions in different ways over the course of his career. While Gordon clearly has significant defensive potential, he did not stand out in terms of steals, blocks, or rebounding on a very good Arizona team. That said, he played a pivotal role on one of the best defenses in college basketball and could grow into a similar role in a very different level of competition. Gordon’s problem comes from the fact that both forward positions have taken on dramatically increased offensive roles in the last decade. His poor shooting severely hampered his offensive game and could be exploited by NBA coaches unless he improves. The balancing act will be a continual piece in the background unless and until Gordon provides enough positives to ensure coaches feel comfortable with him out there.

Doug McDermott, SF, Creighton: The other potential poster child in this class of needing to be worth the trouble. While McDermott has a pretty jumper and scored in a variety of ways in college, he will need to be a strong offensive player to stick on the floor because of how rough his defense looks to be. In four years of college, he had 14 blocks and 34 steals, according to Sports-Reference.com. While he absolutely could make it work, McDermott also suffers from likely being too small to guard opposing power forwards, which makes him less of a matchup nightmare and harder to hide defensively

Dario Saric, F, Croatia and Kyle Anderson, F, UCLA: These two have been lumped together because they are truly unusual commodities: players with forward size who provide most of their value with the ball in their hands. Saric was the MVP of the Adriatic League this season while Anderson starred at UCLA but that production came in a situation that could be much different than they face at the next level. Each compounds that challenge by being a shaky defender without a clear position to defend at the NBA level. I fully expect both to begin their careers as anchors of unconventional second units that must show their game can work in order to transition to a larger role in a rotation.

Marcus Smart, G, Oklahoma State: Potentially an even greater enigma than the two discussed above, Smart faces high upside and uncertainty at both ends of the floor. He defended well in college but I worry about how he will fare against the new breed of freakish PG’s that are becoming more common by the year. However, he has the length and strength to spend some time on opposing shooting guards, which could dramatically increase his usefulness to an NBA team. That added versatility matters  so much because Smart’s offensive game will take some figuring out. In his college career, Smart’s shooting generated plenty of scorn but he also was a mixed bag in terms of running an offense. Whatever team drafts Smart will have to work to maximize his strengths while cleaning up whatever flaws they can to make him a more functional pro.

Jabari Parker, F, Duke: A more conventional problem since his offense was generally good (though he showed far more promise creating for himself than others) and his defense both in skill and effort was horrendous. A lack of improvement on D could amplify the pressure for Parker to succeed on offense and potentially test a coach’s patience with him.

Gary Harris, G, Michigan State: A hybrid of Parker and Smart because his lack of a clear-cut role on offense and defense will give some teams trouble. I think Harris would need a ton of development to become an even passable on-ball player offensively but PG could be his optimal defensive spot. That combination makes him somewhat hard to pair since the true primary ballhandlers with SG or larger size continue to be a rarity in the NBA unless a few guys like Saric and Anderson hit in the next few years.

Elfrid Payton, PG, Louisiana-Lafayette: Another anomaly on this list because he played solid defense and could be a contributor in lots of useful ways even as a rookie in the best league in the world. Unfortunately, Payton plays the position with the most clear-cut offensive responsibilities and he had immense trouble scoring and running an offense effectively against inferior competition in college.

Depending on how things shake out, half of the lottery in a strong draft class will force these kinds of hard decisions throughout their early career. While we all should hope each thrives and finds a good landing spot, the trade-offs in play could affect where they go and how long it takes for them to find success.