The Unfortunate Obscurity Of Nic Moore 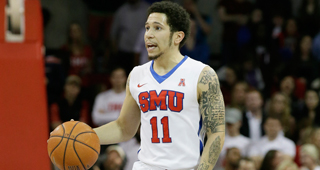 In the five plus years that I’ve been covering college basketball, I’ve never heard coaches talk about an opposing player the way they do about SMU senior point guard Nic Moore.

Jeff Lebo (East Carolina): “I’ve been doing this for a long time and I have never seen a guy with a basketball IQ like that - offensive and defensive. He has everything - he just doesn’t have size. That’s what makes him so special. I just love to watch him. He must be fun to coach.”

Kelvin Sampson (UH): “I love Moore. He’s a kid that should be really, really appreciated. He gets it. He knows how to play. It starts with their best player and they understand who that is. Their shot selection is good because they know who should take their shots - Nic Moore.”

John Beilein (Michigan): “[Moore] is a dynamo. His pace and how he sees the floor and how he runs the SMU offense beautifully - he picks his spots. He’s still a high-volume shooter and never looks like, hey, this is all about me. He really makes great decisions.”

Moore is the best player you haven’t heard much about. He has been SMU’s best player for the last three seasons, ever since he followed his head coach (Tim Jankovich) from Illinois State in order to revive the moribund SMU program. In that time, he has turned SMU into the top program in the American Athletic Conference and one of the best programs in the state of Texas, all the while racking up an extensive fan club in coaching circles. The problem from a national perspective is that things never quite broke SMU’s way, for reasons outside of Moore’s control.

In his first season, the Committee stunned everyone by keeping SMU out of the Tournament in order to punish them for a weak non-conference schedule. His second season ended in one of the most heartbreaking plays in the recent history of the Tourney - a desperation UCLA air ball that was ruled a goaltend when an SMU player went for a rebound of a shot that was wide right by several feet. This season, SMU has been paying the price for academic improprieties under Brown, as they have been banned from the Tourney despite having one of the best teams in the country.

The end result is that Moore has been performing his heroics in relative obscurity, playing for a team in a non Power 5 conference that is playing for nothing more than their pride. He’s averaging 16.1 points and 5.3 assists a game on 42.8% shooting, but the numbers don’t really do justice for the way that he dominates the action. His fingerprints are over everything that happens - he can score from any part of the floor, get his shot whenever he wants, create shots for his teammates with ease and completely control the tempo of the game.

Moore is about as good a basketball player as anyone who is rather generously listed at 5’9 170 can be. A guy with his size had better be extremely fast (which he is), have an extremely high basketball IQ (which he has) and not have any holes in his game (which he doesn’t). Moore has made the most out of his physical limitations, maximizing every part of his game and leaving nothing on the table. He’s able to consistently dominate opponents who tower over him and get around them like they aren’t even there. Moore is so good that you walk into every game expecting David to knock off Goliath.

The obvious question when watching him is whether he will be able to translate his act into the NBA. It won’t be easy. For every Isaiah Thomas or JJ Barea who have managed to turn traditional thinking about size on its head, there are a dozen guys like Shane Larkin, who was the ACC Player of the Year as a sophomore at Miami before embarking on what has been an incredibly disappointing career at the NBA level, at least so far.

The challenges of being a sub-5’10 player at the highest levels of professional basketball are pretty obvious. Playing effective defense starts with being longer and more athletic than the guys you are guarding and that’s something no one will be able to say about guys like Moore, Thomas and Barea. The defense is pretty much baked into the cake - they have to be so good on offense that it doesn’t matter that opposing players can shoot over them like chairs and that their only hope of making a stop is flailing their arms wildly and throwing themselves to the ground.

What separates Barea and Thomas from Larkin is that they are super aggressive players who look to (and are able to) score every time they touch the ball. If you are going to give up a lot of points on defense, you had better be able to get them back the other way just as quickly. Larkin’s jumper hasn’t translated from the NCAA level to the NBA and he still struggles to balance looking for his shot and trying to set up his teammates. He’s more of a traditional PG than Barea and Thomas and that could be one of Moore’s biggest hurdles when he tries to play in the NBA.

The odds of him being drafted aren’t very high. Thomas was the last pick in the second round while Barea went undrafted entirely. However, according to several NBA executives whom I have spoken too, Moore will get a shot at the next level. He’ll play on a summer league team and he’ll be invited to a training camp. From there, it will be a matter of impressing the coaching staff enough with his offense and his ability to be productive in a limited amount of time to make up the concerns they will have with his defense.

It’s obviously much easier for a guy with Moore’s oddball physical characteristics to dominate at the NCAA level, which is what makes SMU’s postseason ban so unfortunate. This is a guy who could have gone on a Shabazz Napier like run through March - Moore actually got the best of Napier in their two regular season meetings in 2014. Instead, he’ll have to wait until he gets to the NBA to show a national audience what he can do. As one Western Conference scout recently told me, the biggest thing to like about him is that he’s got a big pair of balls.