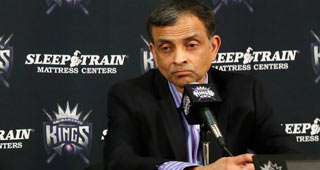 Vivek Ranadivé is rich, and that’s as far as the meaning of that statement goes. He made his fortune by getting in on the ground floor of the mid-80s Wall Street tech revolution. Basically, he figured out how to make networked computers aggregate, analyze, and share information with each other more efficiently than they ever had before, which was something Goldman Sachs and other banking behemoths were willing to spend a lot of money on. And they continue to spend a lot of money on it: TIBCO software can be found on most trading floor computers these days, which speaks well and ill of it at the same time. Ranadivé sold the company for $4.4 billion two years ago, to focus on something he is demonstrably terrible at.

Here’s a complete list of Ranadivé’s accomplishments since buying the Sacramento Kings in May of 2013:

Beyond that, it’s been all bulletproof gargantua and townspeople fleeing for their lives. Ranadivé has yet to find an underling he trusts. His front office is if you took a rat-king of bureaucracy and lit it on fire. The Kings are regularly hiring and dismissing and demoting and retitling top-level executives. During Pete D’Alessandro’s brief general manager stint, analytics types were tossed in a room with ex-jocks and made to come to conclusions by talking past each other, and the current regime, under Vlade Divac, just seems clueless: ignorant of basic trade and salary cap rules, hapless drafters, uninterested in rational team construction. Ranadivé has chewed through coaches, too: Mike Malone, who was fired midseason for no given reason; Ty Corbin, in a capacity that was never totally clear; George Karl, somnambulant, half-retired, and tasked with applying an uptempo style to an unathletic squad; and now Dave Joerger, a fine coach who’s curiously similar to the one they got rid of less than two years ago.

Over the past three seasons, the Kings are 90-and-159. The Sixers have swap rights on their 2017 first-round pick. In 2011, the Kings traded Omri Casspi and a first-rounder that was lottery-protected—and dwindled, year-by-year down to top ten-protected—to the Cavs for J.J. Hickson, who played 35 games for the Kings before they cut him. That pick has finally defaulted into a second-rounder (now owned by the Bulls) because for six consecutive seasons, the Kings drafted inside the protected zone. They’re also going to lose DeMarcus Cousins. Ineptitude reigns.

So, whatever, Vivek Ranadivé is a lousy owner. He’s not the only one. Mikhail Prokhorov has moved the Nets into a rusted spaceship and capped them out. The acute myopia that helped Michael Jordan as a player has torpedoed his ownership tenure. Even some successful franchisees carry the whiff of incompetence. Dan Gilbert, to his credit, spent well over the luxury tax threshold to bring a title to Cleveland, but there is also that time he fired off a public statement that made him sound like an aggrieved adolescent and the fact that the Cavs were a punchline throughout LeBron’s South Beach interlude. Joe Lacob has inarguably done an excellent job with the Warriors, but he seems not to understand where his contributions end and the immensely more important ones made by the players and coaching staff begins. Plus you get the feeling he could drive his car into the ocean and spin it as aquatic vehicular innovation, so it’s lucky for him he employs Steph Curry.

What four of these five men have in common is that the press has at one point or another nearly choked on their adjectives praising them, and they’ve never dunked on Patrick Ewing. Vivek was infamously canonized by Malcolm Gladwell, who spent dozens of paragraphs lauding the ingenuity Ranadivé demonstrated in teaching a twelve-year-old girls basketball team how to full-court press. Dan Gilbert, America’s greatest living predatory lender, has bought up a bunch of property in downtown Detroit, which has puzzlingly been framed as a quasi-philanthropic gesture rather than a real estate investment. Mikhail Prokhorov is a state-sanctioned crook. He’s wealthy because he got in with the right people during the decline of the Soviet Union and was gifted the nation’s nickel industry. Yet when he arrived in the States, he was portrayed as a serious businessman with a winning personality. Joe Lacob once told a reporter he is one of the ten best blackjack players in the world and somehow, the resulting article was about his genius, not his fatuous overconfidence.

Those are specific examples, but more than that, there is this tone that lots of people use when they talk about rich guys. The rich guy in question is so smart, which is sometimes true, but smart is usually just lazy shorthand for good at a particular thing, like finance or real estate. The rich guy thinks outside the box, or some less hackneyed phrase that communicates that his mind is marvelously different from ours, that he understands things at a different speed or on a different plane than we do. The rich guy gets all the credit for his successes, as if luck or circumstance doesn’t apply to him. In other words, he is, in some way that’s never clearly articulated, superior to other people. You can boil a lot of discussions of plutocrats down to Mr. Show’s “More Money = Better Than” sketch.

America has been in the thrall of rich guys since its early days, and we’re a convincing argument that capitalism is a societal illness. It allows us to think we’re living in something like a meritocracy. The system posits that folks get rich for legitimate reasons, and we operate under that delusion because it quiets our worry about structures that favor one group of people over another, and the randomness can scythe anyone down. We’re scared animals seeking order, and that’s why, from J.P. Morgan on through Mark Zuckerberg, we have venerated the wealthy, coddled them, mythologized them, assigned them qualities they don’t have for things they didn’t do alone, or at all. We indulge their hubris and explain away their mistakes. We treat them as if they our best citizens—in the abstract, intrinsically, on a scale that measures the ineffable: goodness, bigness, winningness. Perhaps we want them to be better than us, because that would at least make sense, and because we want to believe that if we were better, we would be rewarded for it.

Vivek Ranadivé is going to be obscenely wealthy for the rest of his life. His family will want for nothing material. That’s his prize for the ideas he’s had and the work he’s put in. He’s not entitled to anything else. He doesn’t have to be liked, admired, or respected. We don’t have to compliment his intellect or position him as a hero in our stories. He is not, by dint of his fortune, impressive or sharp or forward-thinking or interesting or cunning or cool, though he might be any of those things. What’s for sure is he’s rich, and that’s as far as the meaning of that statement goes. He also, for what it’s worth, runs his basketball team like a dolt.