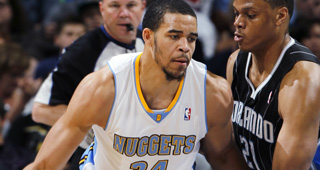 Over the last few seasons, JaVale McGee has emerged as one of the most exciting young players in the NBA. A 7’0, 250 center who thinks he is a point guard, McGee’s boundless enthusiasm, irrational confidence and dubious understanding of some of basketball’s most basic rules have made him a YouTube star.

However, now that he has been removed from the dysfunctional Washington Wizards' locker room and placed in a more professional environment with the Nuggets, his talent is starting to shine through. And after yet another dominant performance against the Lakers’ massive front-line in Game 5, McGee will be one of the most intriguing free agents in the NBA this summer.

Andrew Bynum (7’5 wingspan) and Pau Gasol (7’4 wingspan) are the longest frontcourt tandem in the league, and their length can absolutely suffocate opponents. McGee, with a 7’6 wingspan, 9’6 standing reach and max vertical of over 30’, is one of the only players in the NBA who can consistently score over the top of the Laker big men.

Before meeting their match against Dallas’ two-headed 7’0 tandem of Dirk Nowitzki and Tyson Chandler in the 2011 Playoffs, Bynum and Gasol had gone 9-0 in postseason series, steam-rolling smaller frontlines who couldn’t handle their size, skill and length. That’s what makes McGee’s stat-lines in Game 3 (16 points, 15 rebounds and three blocks on 8-12 shooting) and Game 5 (21 points, 14 rebounds and 2 blocks on 9-12 shooting) so remarkable.

Not only did McGee repeatedly beat the Lakers' big men down the floor for highlight-reel alley-oops, he used an impressive array of drop steps and spin moves to finish in the half-court. He’s playing on a different plane than his competition: when he brings the ball over his head, scoring is as much about shooting under control as it is anything the defender does. If McGee decided to play keep-away with the ball by holding it over his head, the only way anyone else could get it would be to tackle him.

In Denver, where he has a widely-respected coach (George Karl) pushing him and two point guards (Andre Miller and Ty Lawson) getting him easy shots, he’s posted a 20.5 PER. His combination of offensive efficiency (shooting 61% from the field) and defensive dominance (per-36 minute averages of 10.1 rebounds and 2.7 blocks) for the Nuggets is almost comparable to what Tyson Chandler is doing with New York.

Of course, Chandler doesn’t goaltend shots at the prodigious rate McGee does, but in his fourth season in the NBA, he was only averaging eight points, 10 rebounds and two blocks on 49% shooting. Big men traditionally take longer to develop than guards, and McGee is still only 24-years-old.

But while Chandler's career was hampered by injuries, the biggest thing holding McGee back is his immaturity and off-the-court issues. Looming over his impending free agency is Andray Blatche, his former counterpart on the Wizards who looks well on his way to flushing his prodigious talent, as well as the nearly $45 million Washington has invested in him, down the drain.

At this point in his career, the last thing McGee needs is a long-term contract based on his potential. Blatche essentially received a lifetime of financial security without ever having to earn it on the court, which only reinforced his rather lackadaisical work ethic and commitment to the game.

However, in a league starved of big men, that’s exactly what McGee could be in line for this offseason. As usual, the pickings at the center position are slim indeed, especially in the unrestricted free agent list: there are injury-plagued veterans on the downswing of their careers (Chris Kaman, Marcus Camby, Mehmet Okur), raw defensive specialists (Omer Asik, Ian Mahinmi) and Spencer Hawes.

McGee is part of a flawed group of restricted free agents at the position, joined by Roy Hibbert, whom Indiana will almost certainly keep, and the Lopez twins. For a team like Minnesota, who desperately needs defense next to Ricky Rubio and Kevin Love, McGee could be a franchise-saving gamble.

Denver, meanwhile, has been locked in place as the Atlanta Hawks East ever since the Carmelo Anthony trade. While Lawson is one of the best young point guard’s in the NBA, he’s too small to have a championship-caliber offense built around him and they don’t have another big man who can anchor a championship-caliber defense.

With too much talent to tank and without the type of big market profile to attract free agents, the Nuggets don’t have many other options when it comes to acquiring high-upside young players. But while taking a flyer on McGee at the deadline wasn’t much of a gamble, paying him an eight-figure contract would be. And if Denver won’t roll the dice on McGee after his showing against the Lakers, someone else almost assuredly will.