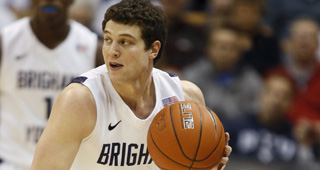 Jimmer Fredette is generally considered offensively gifted, defensively challenged and destined to be a solid rotation player in the N.B.A.

Stardom, however, is unlikely, the scouts and front-office personnel said. Comparative players that came up were Jeff Hornacek, Steve Kerr, Kyle Korver and Jason Kapono.

“I think he’ll be a really good pro, but not great,” said a Western Conference executive, who would not be named because he is not permitted to talk about prospects. “He’ll be a guy who is a better Steve Kerr, a better Kyle Korver. A better Kapono. Both those guys can’t put the ball on the floor.”

The B.Y.U. strength coach, Justin McClure, said he expected Fredette to test well in the physical drills. He said Fredette has a vertical jump of 36 inches, can bench-press 265 pounds and should be able to lift 185 pounds 9 or 10 times.

“I think he surprised people with that,” McClure said. “He’s a lot quicker and more agile than people give him credit for.”