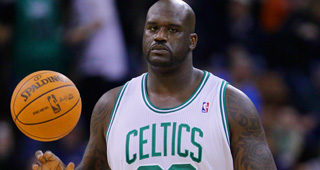 Shaquille O'Neal failed a conditioning test this morning, and has been ruled out indefinitely by the Boston Celtics.

"He has been making progress," Ainge said. "We tried to get him out there to practice today, simulate the game as much as we could. He's not ready. We don't know when he'll be ready."

McKeon said the trial O'Neal was involved in consisted of him running, a test McKeon acknowledged O'Neal had failed.

"It didn't work," McKeon said. "It's just too sore. We're going to spend another … get back to tomorrow and hopefully we'll get him back soon."