Raptors Trying To Move Up To Select Waiters 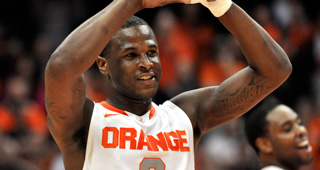 The Raptors have been aggressive in their efforts to move up from the eighth overall selection ahead of the Warriors at seven to draft Dion Waiters, according to sources.

Both Toronto and Phoenix have expressed to Waiters' agent that they would select him with their picks, according to league executives.

Waiters was initially projected as a mid-first round pick, but climbed into the lottery.

Cleveland could select Waiters with the fourth pick if Michael Kidd-Gilchrist and Bradley Beal are off the board.