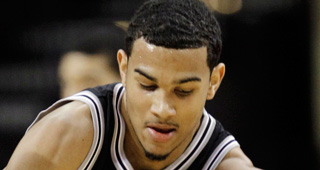 Cory Joseph is in Toronto for the next two weeks attending the Team Canada Senior Men’s Basketball training camp as the team is set to play at the end of the month in the qualifiers for the Olympics in Rio de Janeiro in 2016.

Joseph was asked what he learned in his first NBA Finals experience.

“It was good, a great experience," said Joseph. "Obviously every possession counts. Look at what happened in Game 6.

“We were upset. We let one slip away from our hands. We were right there in Game 6, a couple plays away [from the championship]. It is what it is, the ball falls that way sometimes. We played good, just a couple plays didn’t go our way.”

On the subject of San Antonio Spurs' teammate, Tim Duncan, and the missed bunny over Shane Battier in the final minute of Game 7, Joseph said, “Yeah, he thinks about it. He’s got a lot of other things to worry about right now of course.

“He has a lot going on in his life right now. I hope everything is well for him.”

The former University of Texas point guard is not the only Joseph family member competing for a spot on the roster to represent Canada. His cousin, Kris Joseph, who ended his rookie season with the Brooklyn Nets and his brother, Devoe Joseph, for Khimik in Ukraine last season have also been invited to camp and are fighting for their own spots.

“To have blood here with me, it’s great, it’s amazing”, said Joseph. “When you have three Josephs on one roster, it’s amazing. I was looking at the water bottles today and I was saying they need to put our first names. Looking at the bottles from an angle, all I could see was “Joseph Joseph Joseph!” I couldn’t see the “C” on the other side. They need to put our first names instead of our last names on our jerseys”, he said with a laugh.