Ginobili Expects To Return In 14-15 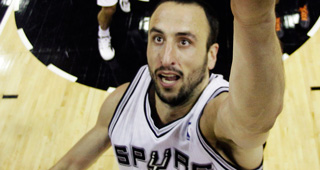 Manu Ginobili signed a two-year, $14 million contract with the San Antonio Spurs just a few weeks after their difficult loss in The Finals.

Ginobili has rounded from a disappointing 12-13 regular season.

"I had a terrible season," said Ginobili. "I had a season where I had three tears in my hamstring, and I could never get in rhythm and it was starting to play in my head. This year, I had none (of that). ... I've been healthy. I've been strong, and I'm not thinking about my body. I'm thinking about the game. That completely changes everything.

"Overall, I just sometimes look at this team, look at what we've accomplished, and say, 'I'm 36, about to be 37, playing big minutes, playing well, enjoying the situation?' I'm very lucky."