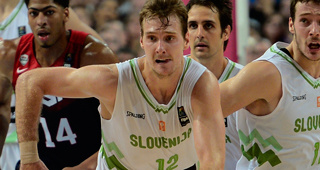 Behind a resurgent desire to pursue the NBA culminating in a successful World Cup showing, Slovenian shooting guard Zoran Dragic has maintained discussions with the four teams interested in signing him for next season: the Miami Heat, San Antonio Spurs, Dallas Mavericks and Orlando Magic, league sources told RealGM.

Dragic, the younger brother of Goran Dragic, had 11 points and five rebounds in 28 minutes against the United States national team on Tuesday. He has informed teams of an Oct. 5 buyout deadline in the language of his contract with Unicaja Malaga of the European League, a source told RealGM.

Dragic, a 6-foot-5 product, has received NBA interest in past summers, and he played for the Houston Rockets’ summer league team in 2012. Several NBA organizations have scouted him throughout the World Cup, sources said, and several new inquiries are placed per day.