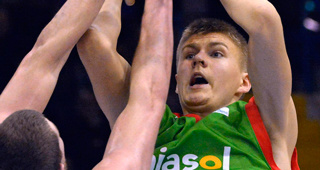 Kristaps Porzingis worked out privately for the Los Angeles Lakers on Monday.

Porzingis had an impressive open workout on Friday in Las Vegas.

Porzingis is pursuing the Lakers’ pick at No. 2, along with D’Angelo Russell and Jahlil Okafor.

“The biggest thing for me – the thing that I think most about – is that you can get into the gym whenever you want here,” Porzingis told Yahoo Sports over dinner recently. “They give you a card, or a key, and in the middle of the night, if you want to work out, you just go to the gym and get your work in – and I think that’s amazing.

“In Europe, you don’t have that option. You can’t get your work in on a Sunday, because nobody is there. I think that’s one of the coolest things. This year, I didn’t have a place to play. I’ve got to talk to the GM, to talk one of the people who work in the arena to open the door for me. People don’t want to do extra work at the arena.”

Kevin Garnett: “I love his face-up game. He’s got that mid-range shot. I’ve seen a lot of tape where he plays against guys like Shaq [O’Neal], a guy he can’t bang inside with. So faces up, does his little step-back move … Amazing.”

One former NBA Executive of the Year, who won’t have the chance to move up to get him, told Yahoo Sports. “If the draft was one year from now, I think Porzingis goes No. 1. He’s just not fully formed yet and that’s getting in the way of people’s decisions. But one more year, and I think it would be him and then [Karl-Anthony Towns, Russell and Okafor].”