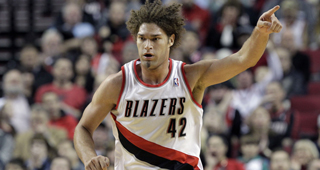 Beyond Portland, Lopez is expected to have a list of suitors on July 1, and his connection to Pelicans coach Alvin Gentry has been clear around the NBA. Gentry coached Lopez during the seven-foot center’s first four seasons with the Phoenix Suns.

The Pelicans also are likely to have an interest in Golden State Warriors free agent Leandro Barbosa, whom Gentry’s long coached as an assistant, sources said.

The Blazers will assuredly pursue re-signing Lopez, too. The 27-year-old big man stabilized Portland’s center position over the past two seasons alongside LaMarcus Aldridge, averaging 11.1 points and 8.5 rebounds in 2014-15, and there is believed to be an interest for Lopez to play with Aldridge again next season.

Lopez has spent seven years in the NBA with Phoenix, New Orleans and Portland. He has averaged 8.2 points and 5.1 rebounds for his career — including 11.3 points and 5.6 rebounds in his lone season with the Pelicans.