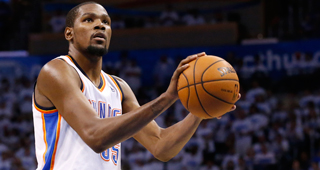 Stephen A. Smith reported this week that the Los Angeles Lakers are his preferred team if he decides to not re-sign with the Oklahoma City Thunder.

“Regardless of how senseless it may (sound), in one breath I’m hearing that if Kevin Durant doesn’t stay in Oklahoma City, L.A. is his primary objective and landing spot as opposed to South Beach or even his home of Washington, D.C.,” Smith said.

Smith also said he's heard the New York Knicks could be in play for Durant.

“I heard Melo, Kevin Durant, Kobe,” Smith added. “And when you take into account that Phil Jackson is on the record saying it might be Kobe’s last year in L.A. — opening the door that there are possibilities for him to go elsewhere. All I’m saying is you just never know.”