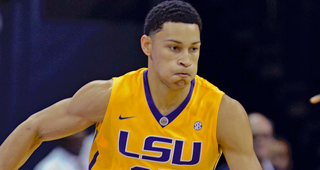 Ben Simmons did not start because "we had to address some academic stuff with him earlier in the week," according to head coach Johnny Jones.

"This is just one of the attention getters for him," Jones said. "We're hopeful that this will help get him focused and concentrated on what he should be doing."

Simmons played 36 points and had 21 points and nine rebounds to go with a season-high eight turnovers.

Simmons is projected to become one of the NBA's top picks in the 2016 draft.