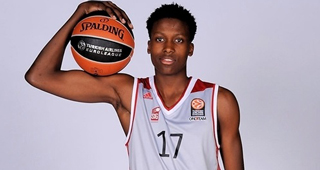 Frank Ntilikina is the top European prospect eligible for the 2017 class. Draft Express currently ranks him 10th in its top 100 and it could be argued that’s a bit low considering the 18-year-old will be one of the youngest players in the class if he chooses to declare for it (only turning 19 in July) and the fact that no other lottery prospect has accumulated the level of experience Ntilikina already has.

The six-foot-five combo guard has logged 758 minutes of pro ball for French side Strasbourg over the past two years and this season has earned a role as a legit rotation player who has averaged 15 minutes per game in 29 appearances in the French Pro A and the Basketball Champions League.

Both competitions Strasbourg plays in aren’t of the highest quality, ranking a good deal below the best domestic and continental leagues in Europe - which are the Spanish ACB and the EuroLeague. Nonetheless, these are fully developed grown men Ntilikina is competing against, which is tougher than playing Washington State or Wake Forest.

That said, Ntilikina is not as well thought of as he is now because of what he’s done as a pro. Playing in an environment where wins and losses cost people money and jobs means prospects are rarely given much opportunity to expand their skill-sets during games. Such is the case as Ntilikina has filled a role as an off-guard for Strasbourg, mostly spacing the floor and rarely given shot creation responsibility, as he’s finished just 18.8% of his team’s possessions with a shot, free throw or turnover when he’s been on the floor – according to our stats’ database.

But Ntilikina’s performances against his age group, including leading the French junior National Team to the title of the 2016 FIBA U18 European Championships in December, are what have caught people’s attention.

As a part of national teams at the youth level, Ntilikina has shown he can act as a volume shot creator, capable of getting his team shots on an every-possession basis, which combined with his height, makes him an elite prospect, even in a class as strong as this 2017 one is perceived to be.

Though his size offers positional versatility, Ntilikina is viewed as a legit lead ball handler based on what he’s done against his age peers and has impressed with how sophisticated a shot creator he is for a teenager.

He has very good understanding of how to maneuver his defender around a ball-screen, a nice feel for whether using or declining the pick gives him a better advantage for getting downhill and patience to play with pace waiting for driving lanes to clear against hedges, hard shows and half-traps.

Ntilikina has excellent court vision on the move, proving himself able to make passes across his body to the opposite end of the court. He’s also able to see over the average point guard-size defender when that defender manages to prevent him from turning the corner.

According to our stats database, Ntilikina assisted on 40.3% of France’s scores when he was on the floor in the 2016 U18 FIBA European Championships. His 1.5-to-1 assist-to-turnover ratio in this event wasn’t as pleasing but he posted a 3.3 ratio in this same tournament the year before, so it’s still unclear to which extent Ntilikina is turnover prone.

Creating for himself, Ntilikina has proven to be a little more limited without the aid of a screen. He does have a tight handle and has shown in the past a diverse arsenal of moves to get wherever he wants on the court. But he doesn’t have an explosive first step and has struggled to blow by big men on switches.

Ntilikina can get around some defenders with craft and sudden change of direction but has struggled to get all the way to the basket regularly, instead relying a lot on his floater to finish over length from the in-between area. He has great touch on these finishes but it’s tough to make a living with this shot as your top way to score within close range, which is his case right now.

Ntilikina has flashed some explosiveness elevating out of one foot in traffic here and there in the past but doesn’t often do that. He also doesn’t use his length for extended finishes around the basket enough at this point of his development and doesn’t yet have a big enough frame to draw contact, as he averaged just 3.7 foul shots per 40 in the U18 Euros - which wasn’t an impressive mark in the context of his 24% usage rate.

Ntilikina has improved as a pull-up shooter, though. His low release still demands he gets a good deal of separation to get the ball out comfortably but he is a lot more capable of burning opponents who opt to go under the ball-screen and have the big man only go up to the foul line against him, even flashing the ability to make these shots from beyond the FIBA three-point line.

And as a spot-up shooter, Ntilikina has taken a substantial step forward. He runs some side pick-and-roll at Strasbourg but for the most part he is not relied on to create against a set defense, so his role is as a floor spacer. And in that role, Ntilikina has excelled.

His low release, while not necessarily textbook, has not limited him as an open-shot shooter, as he’s nailed 38.2% of his 55 three-point shots this season. His trigger is quicker than it was last season and Ntilikina has even shown some dynamism, coming off pindown screens from time to time. That’s not enough to suggest he has room to develop into an Isaiah Thomas-level of shooter who can sprint from one side of the floor to the other around screens but it’s definitely enough to envision him working as a screener on small-small pick-and-rolls Matthew Dellavedova-style.

One thing Ntilikina still needs to develop is a side-step to escape closeouts, though. He often dribbles in to take a one-dribble two-pointer.

Ntilikina is expected to develop into an impact defender given his size, length and quickness. But he’s only halfway there for now.

Strasbourg mostly plays him as a weak-side defender and Ntilikina has shown good awareness off the ball, attentive to his responsibilities rotating inside to bump the roll man diving to the basket and using his six-foot-11 wingspan to make plays in the passing, averaging 1.7 steals per 40 minutes.

He hasn’t shown enough leaping ability to make plays at the basket and his defensive rebounding hasn’t translated to the pro level yet, though.

For the French junior national team, Ntilikina played mostly as an on-ball defender, with mixed results. He does go over screens and has the lateral quickness to stay attached to his man in side pick-and-rolls but hasn’t shown much urgency tracking his man back when he gets downhill, exposing the defense behind him.

Ntilikina has great potential to unlock as a pick-and-roll defender, using his length to deflect passes and contest shots from behind. But for that to happen, he needs to hustle back to his man quicker.

Ntilikina might also have potential to pick up bigger players on switches some day in the distant future but that’s definitely not the case yet as he lacks strength and toughness to get physical with them fronting the post and boxing out.

But Ntilikina truly shined in individual defense among his age peers. He gets in a stance and uses his lateral quickness to stay in front. When they tried to take him one-on-one, these European teenagers really struggled getting a good shot off against his length. And though he lacks strength to contain dribble penetration through contact, Ntilikina uses his reach to pickpocket opposing point guards, averaging 3.2 steals per 40 minutes at the 2016 U18 European Championships, which led to him posting the fourth lowest defending rating in that tournament.