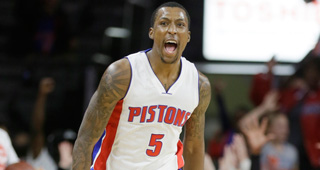 The production of Kentavious Caldwell-Pope looks fairly ordinary in a vacuum, but he’s one of the best two-way players in the NBA at a position of scarcity and he’s still improving at the age of 24. Players as good as Caldwell-Pope rarely become unrestricted free agents at such a young age, and a weird process concluded more quickly than expected with his one-year, $18 million deal with the Los Angeles Lakers.

Caldwell-Pope is one of the NBA’s better defensive players at shooting guard, particularly with his ability to slide down to defend point guards.

While different players stylistically and of course in terms of three-point shooting, Caldwell-Pope compares to Klay Thompson in terms of impact on the game on both sides of the floor. Thompson took a big leap in his age 24 year after similar production we have seen from Caldwell-Pope.

Caldwell-Pope bounced back on his three-point shooting in 16-17, hitting 35 percent of his attempts after that number dropped to 30.9 percent in 15-16. Caldwell-Pope can also create his own offense off the dribble.

With Lonzo Ball at point guard and Brandon Ingram at small forward, Caldwell-Pope fits perfectly. Caldwell-Pope will take the more difficult defensive assignment against opposing guards, which will often be point guards, with Ball having enough length to defend most shooting guards. This will ease his transition as we’ve already seen how far away Ball is from defending even an average pick and roll in the NBA.

The best part of this deal for the Lakers is they get to preserve their 2018 cap space while acquiring their starting shooting guard of the present, and potentially the future if they’re unable to sign two max players.

The fact Caldwell-Pope is represented by Rich Paul is an ancillary benefit worth noting considering the scope of their omnipresent 2018 ambitions.

Grade for Lakers: A

Restricted free agency is a precarious exercise for most players. It’s a component of the system that needs a major overhaul during one of these CBA cycles yet has hardly emerged as a priority for anyone. It understandably protects teams from losing automatic max players, but it unfairly depresses the market of starter quality players teams expect to match on.

Caldwell-Pope would have preferred a five-year max from the Pistons or even a four-year max, but his market vanished when the Nets traded for DeMarre Carroll, the 76ers signed J.J. Redick to a one-year deal, the Knicks signed Tim Hardaway Jr. to a four-year deal, and the Hawks signed Dewayne Dedmon.

Caldwell-Pope will earn almost $7 million less than Otto Porter in 17-18, not to mention the extra three years on top of that, but $18 million for the team of his choosing is a lot better than playing under the $4.96 million qualifying offer. Detroit’s best offer to Caldwell-Pope was reportedly only $80 million over five years.

Entering free agency unrestricted from the outset next season, Caldwell-Pope will likely find a truer market, especially with Philadelphia continuing to be a perfect fit with one more offseason of cap space.

Grade for Kentavious Caldwell-Pope: B+

The Pistons’ long-term cap and tax issues became problematic this offseason as the deals in which they kept paying a little too much kept egregiously adding up. The Pistons essentially traded Caldwell-Pope and Marcus Morris for one affordable year of Avery Bradley before he becomes unrestricted and a three-year, $21 million deal on Langston Galloway.

I’m sure we’ll find out eventually if there is a reason why the Pistons decided to let their best player inexplicably leave beyond financial ones, but this feels like the point where bad cap management makes a significant negative impact on roster quality. These are the types of moves that typically happen after playoff success and not at an early point in a team cycle when the core is still so young.