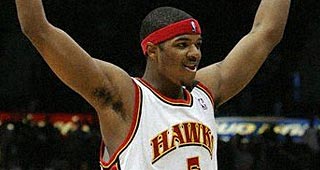 It hasn’t been that long since Josh Smith exited the league. His last real moments—before that end-of-career, just-trying-to-catch-on-somewhere blear set in—were coming off the bench in Houston during their 2015 playoff run, annihilating the Mavericks from the mid-post and draining improbable threes as an agent of the Clippers’ second round curse. By then, he had already been cast off by Stan Van Gundy, straight up released by the Pistons not even a season-and-a-half after signing a four-year deal. Even at 29, there was a late in life quality to his game, a sense of nostalgia, memories through no small amount of effort still animated that might by next week lie static as photographs. After the Warriors bounced the Rockets in the Western Conference Finals, Smoove had 58 games left.

Though he persisted into the modern era of wide open basketball, Smith spiritually belongs to the much junkier mid-aughts. He entered the NBA in 2004, at the tail end of the preps-to-pros boom and in the thick of another trend: a time when front offices were enamored with long, terrifyingly vertical forwards with more athletic elan than basketball knowhow. You will occasionally read about the Pentagon pouring hundreds of millions of dollars into the development of, say, an extremely cool-sounding jet that in reality barely flies and for some reason explodes whenever a left-handed person operates it. These are stories about the power of self-delusion, bureaucratic inertia, and the strange, spectacular hard-ons military men get for the next generation of death machines. They are also, if you swap out a few particulars, a decent explanation of why Tyrus Thomas was a lottery pick.

We all dream, whatever we dream about, without any sense, and sometimes forget that this is not the same thing as making a plan. What we imagine in our mind expands ever-outward but disintegrates the moment reality touches it. The thing’s got no bones.

Josh Smith was actually quite a player, as tremendously gifted disappointments go. He wasn’t a bust like Tyrus Thomas or Darius Miles or even a productive underachiever like Marvin Williams or Corey Brewer. If he has a peer, it’s probably Lamar Odom, though Lamar was both more skilled and more personally troubled. (More successful too, after Pau Gasol joined he and Kobe in Los Angeles.) Josh Smith was damn good, all things considered, but so frequently and heavily lamented that he became more closely associated with his poor decisions than his broad range of talents.

His shot selection was stupid. He liked the three, loved the long two, and couldn’t make either one of them. Smoove once said “I’m not one to look at where I am on the court [when I shoot],” and really, he should have. In 2015, Jonathan Abrams wrote a long feature on Smith that features roughly a billion instances of a parent, coach, or teammate saying something like yeah, I dunno, the guy just likes to heave it. It’s not like nobody talked to him about it, or that Smith wasn’t aware that he was a horrifically unsuccessful jumpshooter. He simply felt like the next one was going in. Aside from a couple seasons in Atlanta when he made more of an effort to attack the rim—not coincidentally, the two most efficient years of his career—he was addicted to pulling up as the entire arena groaned.

The thing is, it’s not like Josh Smith was Russell Westbrook. He wasn’t shooting poorly and all the time. For most of his career, he shared an offensive workload with Joe Johnson and Al Horford, and if those two demi-stars weren’t quite voluble enough to relegate Smith to a role that perfectly suited him, they also freed him up to do the kind of dazzling peripheral work he thrived on. You could be forgiven for watching Smoove hoist a series of godawful fading 18-footers and conclude that he had no idea what he was do—and a lot of people did just that, based on their limited information; the Hawks were not exactly appointment viewing—but he was inarguably, shot selection aside, a really smart player. On the perimeter, he used his length to force ballhandlers wherever they didn’t want to go, or into help, and in the paint, Horford’s excellent positional defending allowed him to be an off-ball predator, arriving from the weak side to erase lay-in attempts and strip posting big men. He was a good passer for the same reason he was a good cutter: Smoove had a sharp understanding of timing and angles, how to start moving a beat before the rim protector needs to get out of the paint.

If Josh Smith were only that stuff, plus his blow-by drives and outrageous dunks and maybe only a small handful of trust-me-this-is-money pull-ups per game, every team in the league would have been thrilled to have him. That he stubbornly wasn’t was a product of both his circumstances and his constitution. Some guys never learn, and some guys never get the right opportunity. It’s fun to imagine what might have happened if you stuck a 25-year-old Smoove on, say, the 2015 Warriors, where he could have played the Draymond Green role with awesome athleticism if slightly less defensive genius. Maybe that’s something he would have taken to. Instead, he was frustrating and productive in Atlanta. Then he went to Detroit, lost interest, and quickly shot himself out of the league.

It’s not an accomplishment to resist optimization. Or it is not necessarily that. Sometimes your critics are being overly particular, and sometimes they has a point, and growing up is realizing which of your dumb fixations are crucial to your sense of self, and which ones are merely counterproductive. Josh Smith didn’t need to take so many lousy shots to be Josh Smith, though those lousy shots did eventually come to define him in the eyes of others.

What made him appealing and endlessly aggravating is that he was so much more than that, but didn’t allow himself to be everything he could have been. To a degree, that’s true of many NBA careers, but with Smith, the discrepancies—between perception and reality, between imagining and realization–were as wide as lakes. Volatile and mysterious, he wasn’t what anybody claimed he was, or hoped he would be. There was definitely something about him, but it came to you only in dreams, and by the time you awoke, you couldn’t say for sure what it was.