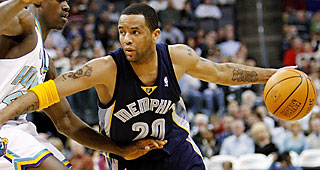 Like many players who hooped in Portland from the mid-90s through the mid-aughts, Damon Stoudamire was regarded as a disappointment. He was a local who had passed through Toronto, becoming that fledgling franchise’s offensive engine as the seventh overall pick out of Arizona but quickly growing disenchanted carrying some of the worst squads in the league—Isiah Thomas, Master Executive was involved—to lottery berths. In the summer of 1997, he gave the club a heads up that he was leaving in free agency next offseason if their trajectory didn’t improve. After successfully complaining his way out of a move to a post-Shaq, soon-to-be post-Penny Orlando team, the Raptors sent him back home to the Pacific Northwest.

This seemed a fine place to set down roots and enact the second phase of his career. Stoudamire had been the best high school player in Oregon not so long ago, leading Woodrow Wilson High to state championships in 1989 and 1991. Plus the Blazers were up-and-coming. After getting his first taste of the playoffs in 1998, Stoudamire signed a seven-year, $81 million extension to feature alongside Rasheed Wallace, J.R. Rider, and Brian Grant, all of whom were in their mid-20s. That squad broke out something serious the following year, going 35-and-15 in a lockout-shortened season and getting swept in the Conference Finals by the eventual champion Spurs.

In hazy public memory, the Jail Blazers moniker is most strongly associated with those troubled early aughts teams—Zach Randolph, Ruben Patterson, Bonzi Wells—but the term was actually coined back in 1996, in a big takeout feature from Willamette Week. (Corbin Smith digs into that, um, problematic bit of journalism at length in his terrific JB exegesis.) The piece featured a two-page graphic meant to resemble police records and used a ten-point scale that weighed the perceived malignancy of guys like Sheed and Jermaine O’Neal against their on-court abilities. By the time Stoudamire arrived in Portland, local fans and media were already, accurately and not, describing their players as criminals.

Stoudamire was supposed to purify this iniquitous air. Jon Wertheim framed Stoudamire’s long and lucrative extension as a “significant measure of damage control” from a front office that was aware its season ticket holders actively disliked half the roster. “He’s a Portland kid with a sterling reputation,” Wertheim wrote.

If you were living in the Pacific timezone and interacting with Stoudamire only through skimming box scores or catching SportsCenter highlights each morning, you might have been underwhelmed by him when he showed up on your favorite team. Stoudamire averaged nearly 20 and 9 over his first two seasons in Toronto, figures he never approached with the Blazers. His Raptors numbers were what we now understand as classic good stats/bad team stuff. It’s not that he declined in Portland so much as he stopped playing in a vacuum. Better teammates ate into his shot count and he wasn’t chasing double-digit deficits against defenses that were only mildly interested in stopping him. Stoudamire the Blazer was reliable for an inefficient 13 and 5, and he couldn’t stop anybody on the other end. He was a flashy, exhilarating but ultimately just-okay starting guard.

He also really liked to smoke weed. For some reason, despite the fact that seemingly half the league smoked pot on their own time, the Blazers—well, the name did not help—were known as the NBA’s Marijuana All-Stars. And Stoudamire was their captain. He got caught with weed in an airport. He flunked a few league-mandated drug tests. He was once pulled over by cops in a car that reeked like a skunk. (He wasn’t driving; the driver was sober.) In 2003, following his run-in with the TSA, Stoudamire vowed to quit smoking. He enrolled in a drug treatment program and sought counsel from a famous NBA washout, recovering alcohol and cocaine addict John Lucas.

And it worked. Stoudamire was drug-free throughout the 2003-04 season. What should have been a low-key personal triumph was instead perverted into an opportunity for a Portland beat writer to hold this young man accountable. John Canzano, a columnist for the Oregonian, asked Stoudamire before the season if he would submit to a random drug test at a time of Canzano’s choosing. Stoudamire consented to this weird little police action and after a March 5th practice, Canzano handed him a home test kit. The guard retreated to the bathroom, pissed in a cup, and gave the sample to head coach Mo Cheeks. The test came back negative. Canzano two days later, haughtily taking the consumer protection angle: “he’s removed doubt about whether Blazers ticket holders are getting a clean and sober Stoudamire when they buy a ticket.” At the next Blazers home game, Stoudamire received a standing ovation. His greatest achievement that year wasn’t kicking pot; it was not fighting every single person in attendance that night.

Stoudamire’s play didn’t improve after he stopped using marijuana. He was the same streaky scorer and moderately gifted passer he had previously been. His career tailed off in his early-to-mid 30s in a predictable way: his knees deteriorated and he lost the hare-quick first step he relied upon to get by his invariably larger defender. Dubious moral improvement, surprisingly, did not save Damon Stoudamire, just as ordinary vice had not hindered him.

There were a handful of Jail Blazers who had authentically appalling records—Ruben Patterson, for instance, once coerced his family's nanny into giving him oral sex—but Stoudamire wasn’t one of them. His transgression was something that hasn’t been a crime in Oregon since 2014 and in 2003 was hardly considered a prosecutable offense by anybody who wasn’t following D.A.R.E. literature to the letter. After Stoudamire recounted the pee test story in a piece for the Players’ Tribune in 2016, Canzano tweeted about the standing ovation and congratulated Stoudamire on then-recently being named head coach at the University of Pacific. “Proud of that guy,” Canzano beamed, patronizing as ever. The implication being that, beneath Canzano and his ilk’s paternal glare, a virtuous transformation had taken place. Stoudamire was successfully scolded into becoming what other people wanted him to be. Hopefully, though few in the media thought to ask, this is what he wanted for himself too.