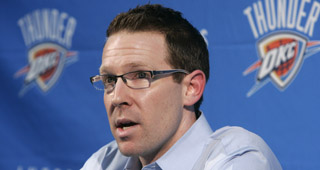 The NBA's most rapid free agency period is nearly upon us. Here are RealGM's Power Rankings going into an important, free-for-all offseason.

1. Dallas Mavericks -- As long as they keep free agent Tyson Chandler, age will not be a huge factor for the defending champs. Chandler, 30, is the NBA’s most versatile defensive big man; Dirk Nowitzki, 33, is its most versatile offensive one. Together, they’re a seven-foot Voltron. Dirk’s game, which revolves around size and shooting ability, should age well. Everyone else is replaceable, and Rudy Fernandez could have a big year for Rick Carlisle, who excels at putting players in a position to succeed.

2. Oklahoma City Thunder -- The only contender that won’t need to make any free agent moves. If James Harden and Serge Ibaka continue to improve, while Kendrick Perkins continues his recovery from a torn ACL, they will have the most complete starting five in the NBA.

3. Miami Heat -- They still need to make a few tweaks, including clearing out the back of their roster, which was filled with aging and unproductive veterans last year. Their biggest issue in free agency is the center position, where they are extremely undersized. Any production from rookie Norris Cole at the point will be an improvement from Mike Bibby.

4. Los Angeles Lakers -- They’ve still got three of the most skilled, versatile and athletic 6’10+ players in the NBA to complement Kobe Bryant offensively. It will be interesting to see whether new coach Mike Brown attempts to get Andrew Bynum more shots, but their biggest concern in free agency should be addressing a perimeter defense that was embarrassed by JJ Barea and Jason Terry in the playoffs.

5. Chicago Bulls -- An excellent defensive team that matches up very poorly with their main competitor in the East. They need a second shot creator from the perimeter to ease some of Derrick Rose’s offensive burden, but none of the available free agents (Arron Afflalo, Jason Richardson, Jamal Crawford) seem good enough to get them past Miami.

6. Memphis Grizzlies -- While the rest of the league has gotten smaller on the interior, they’ve got two legitimate low-post scorers in restricted free agent Marc Gasol and newly re-signed Zach Randolph. They’ve also got a big and athletic defense spear-headed by Tony Allen, the best perimeter defender in the NBA. Their ceiling will depend on how well they can re-integrate Rudy Gay on both sides of the ball.

7. San Antonio Spurs -- While their first round loss as the West’s No. 1 seed had to be disheartening, they still won 61 games (2nd most in the NBA) and had a +5.7 point differential (4th in the league). But either through free agency or trades, they have to get a long and athletic power forward who can stretch the floor if they want to become a contender. Kawhi Leonard, an athletic 6’7 225 rookie with a 7’3 wingspan out of San Diego State, could help.

8. Portland Trail Blazers -- They have one of the best defensive frontlines in the NBA with Marcus Camby, LaMarcus Aldridge, Gerald Wallace and Nic Batum. Ray Felton, who can shoot 3’s, should be a better fit than Andre Miller next to Aldridge, whose become an elite offensive player. Once again, they have no idea what to expect from either Greg Oden or Brandon Roy, if they even still have either.

9. Boston Celtics -- It’s hard to see them as a legitimate championship contender playing Purdue rooke JaJuan Johnson and the perpetually injured Jermaine O’Neal next to Kevin Garnett on the interior. They’re very thin up-front and they already have over $70 million in payroll this season before re-signing either Glen Davis or Jeff Green.

10. New York Knicks -- Carmelo Anthony and Amare Stoudemire should be much improved in Year 2 together, while rookie Iman Shumpert could be a big surprise as a perimeter defender to pair with Chauncey Billups. They’ll need to address their currently non-existentant center position, manned solely by Ronny Turiaf, in free agency.

11. Atlanta Hawks -- They’re still stuck in place with a core of Joe Johnson, Marvin Williams, Josh Smith and Al Horford while getting zero production from the center position. Jeff Teague should continue to improve, but it’s hard to see them challenging Chicago or Miami without re-shuffling their nucleus.

12. Orlando Magic -- They’ll need to work miracles to upgrade their roster before Dwight Howard enters free agency, but GM Otis Smith doesn’t have any more rabits he can pull out of his hat. They don’t have any cap room or attractive trade assets.

13. Los Angeles Clippers -- A young team ready to make the leap: They’ve got two of the NBA’s best young players in Blake Griffin and Eric Gordon, as well as an athletic young seven-footer to anchor their defense in DeAndre Jordan. A surprisingly complete team with a lights-out shooter (Mo Williams), a third big man (Chris Kaman) and two high-upside young players (Eric Bledsoe and Al-Farouq Aminu). Will probably try to improve their perimeter shooting and small forward position in free agency.

14. Denver Nuggets -- With Wilson Chandler, J.R. Smith and Kenyon Martin playing in China and Arron Afflalo and Nene entering unrestricted free agency, they have the most unsettled roster situation in the NBA. Ty Lawson should improve with a bigger role and they might need their first-round picks, Jordan Hamilton and Kenneth Faried, to play right away.

15. Philadelphia 76ers -- No rookie has more pressure on him than Nikola Vucevic, their 7’0 260 first-round pick from USC. Philadelphia has a strong core of perimeter players (Jrue Holiday, Andre Iguodala, Lou Williams, Evan Turner and Thaddeus Young), but they’re not moving up in the East without better frontcourt play.

16. Milwaukee Bucks -- The keys to their season will be Andrew Bogut’s health and Brandon Jennings’ maturation as a third-year player. Under Scott Skiles, Milwaukee will play tough, aggressive defense, the question is whether they’ll be able to score enough points. Stephen Jackson could be a huge addition as a secondary shot-creator on the perimeter.

17. Phoenix Suns -- They’ve still got Steve Nash and two young, athletic seven-footers at center in Marcin Gortat and Robin Lopez. Markieff Morris can step in as a rookie and give them defense, rebounding and three-point shooting at the power forward position. That should be enough to keep them around .500 in the West.

18. New Orleans Hornets -- With David West potentially leaving in free agency, the offensive burden on Chris Paul will be enormous, as the rest of their roster isn’t very big or talented. Monty Williams will have to squeeze blood from a rock to get them back to the playoffs.

19. Houston Rockets -- They’ve got two solid starters in Kevin Martin and Luis Scola and a huge grab-bag of interesting young players -- rookies Marcus Morris and Donatas Motiejunas as well as Patrick Patterson, Chase Budinger, Courtney Lee, Terrence Williams, Goran Dragic, Hasheem Thabeet and Jordan Hill. However, none of them are likely to be a primary option on offense or an effective two-way player on the interior.

20. Indiana Pacers -- They’ve received a lot of positive publicity after their tough first round series with the Chicago Bulls, but they still finished with 37 wins and a -1.1 point differential last year. The continued improvement of their many young players and the addition of George Hill might only get them to slightly above-.500.

21. New Jersey Nets -- They should be a good offensive team with Deron Williams and Brook Lopez, but they have a lot of interesting decisions to make as they fill out the rest of their fairly barren roster. It’s not a great year to have a lot of salary cap room.

23. Washington Wizards -- This year is all about the development of John Wall as a primary offensive option and Javale McGee as a defensive anchor. They’ll try to integrate rookies Chris Singleton and Jan Vesely into the mix, while also giving Andray Blatche one more chance to prove he’s not a lost cause.

26. Minnesota Timberwolves -- Rick Adelman should help, and Kevin Love, Michael Beasley and Derrick Williams should score, but there’s isn’t much defense on this roster. It’s hard to say what they will get from two of the most enigmatic young players in the NBA, Ricky Rubio and Anthony Randolph.

27. Detroit Pistons -- Greg Monroe is a good two-way big man and Brandon Knight will be able to score if given enough shots. Everyone else on their roster is probably on the trading block. Lawrence Frank is their fourth head coach in five years.

28. Toronto Raptors -- Jonas Valanciunas might end up being the best player from the 2011 Draft, but will remain in Europe. They have some athletes in the frontcourt, but they’re going to have to depend an awful lot on Jerryd Bayless to create shots.

30. Cleveland Cavaliers -- This year will be all about the development of their two lottery picks, Kyrie Irving and Tristan Thompson. They have a few decent veterans, but the majority of their roster is fairly devoid of talent.