Jahlil Okafor, Myles Turner And The Futility Of The Process 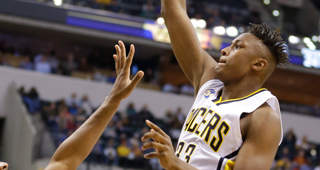 If Myles Turner and Jahlil Okafor had declared for the draft out of high school, they both would have been taken in the Top 5. The top two overall recruits in the class of 2014, they had the size, the physicality and the skill-sets to play at the next level right away. The one-and-done rule meant they had to play at least one season in college, but everyone knew that was only going to be a brief stopover en route to long and productive careers in the NBA. All their NCAA coaches had to do was avoid screwing them up. The difference was that Okafor played for Mike Krzyzewski and Turner played for Rick Barnes.

Okafor teamed up with Justise Winslow and Tyus Jones, two guys whom he had befriended playing internationally for Team USA, to form one of the most formidable recruiting classes in recent memory. Coach K wasted no time turning his team over to his star freshmen, who instantly became Duke’s primary option (Okafor), their best two-way player (Winslow) and their best playmaker (Jones). Duke had just lost Jabari Parker and Rodney Hood, so there were plenty of shots, minutes and touches to go around for their best players.

It took awhile for such a young team to hit their stride, but Coach K eventually found the right combination when Amile Jefferson went down with an injury, moving Winslow to small-ball PF and playing 4-out around Okafor. Okafor was surrounded by 3-point shooters - Jones, Winslow, Quinn Cook and Matt Jones - which put opposing teams in the impossible dilemma of either having to cover him 1-on-1 in the post or leave someone open on the perimeter. Duke picked up steam as the year went on, eventually winning a national championship behind a dominant individual season from Okafor.

Things didn’t go as well for Turner, who decided to stay close to home and play at Texas. He was the biggest recruit that Barnes had reeled in since Kevin Durant and he was expected to turn around a program that had hit hard times. There was still plenty of talent in Austin, but it didn’t fit well together and it was unclear whether Barnes, who had been the Longhorns head coach for over 15 years, knew how to build a roster that would succeed in the modern game.

The biggest problem for Turner was the composition of the team around him. Texas was bringing back two other C’s who were getting looked at by NBA teams - Cameron Ridley and Prince Ibeh - as well as two PF’s with a chance to play at the next level - Jonathan Holmes and Connor Lammert. There was a logjam for minutes in the frontcourt which was resolved by moving Holmes to SF, a move somewhat reminiscent of the Detroit Pistons trying to play Josh Smith at SF. To make matter worse, the Longhorns had very little three-point shooting from their guard positions, which meant there was no space for their big men to do anything.

That was the difference between the seasons at Duke and at Texas in nutshell. Duke moved a SF to PF and opened up the floor for their star big men while Texas moved a PF to SF and clogged up the floor for theirs. And while Coach K had recruited an abundance of wings and perimeter shooters, Rick Barnes was still operating under the old model of stocking up on as many big men as you can and trying to overwhelm teams with size at every position. That’s why one guy is going to the Hall of Fame and the other guy lost his job at the end of the season.

What that meant from a draft perspective was that it was almost impossible to compare Turner and Okafor using their individual statistics.

You would obviously rather have Player A’s season than Player B’s, but those numbers were as much a reflection of the way they were used by their teams as they were their own individual abilities. The question teams should have been asking themselves is how Okafor would have fared at Texas and how Turner would have fared at Duke.

Once you look at things from that perspective, the comparison between the two players wasn’t as clear-cut. At 6’11 270 with a 7’4 wingspan, Okafor is a wondrously skilled big man who can score at a high level from the low post or the high post and pick apart a double team. However, since he’s not a jump-shooter, he would have had a lot of trouble scoring in the clogged paint at Texas. At 6’11 240 with a 7’5 wingspan, Turner is almost as big and he has a pretty good back to the basket game in his own right. He would have put up much better numbers playing in space and playing with fewer big men at Duke while his ability to play the pick-and-pop would have allowed them to play a 5-out offense that would have made life miserable on opposing defenses.

The biggest difference between the two comes on the defensive end of the floor. Okafor wasn’t asked to do much of the heavy lifting at Duke with guys like Winslow, Jones and Cook in front of him and his inability to protect the rim and slide his feet on the perimeter weren’t exposed too much. Turner was forced into a weird hybrid role at Texas where he had to guard 25+ feet from the basket in order to create playing time for Ridley and Ibeh. When he was the primary rim protector, he had to constantly clean up penetration because Holmes and Lammert had difficulty keeping smaller offensive players in front of them.

Okafor was put in a position to succeed at the NCAA level and Turner wasn’t, which is why Okafor was in the conversation for the No. 1 pick while Turner was fighting just to stay in the lottery. When you look at things from a tools perspective, the difference became even smaller. Okafor was the better scorer and passer while Turner was the better shooter and shot-blocker. If you were picking a big man for the modern NBA, which skill-set would you prefer? Most big men played like Okafor in 1995. Most big men will play like Turner in 2025.

That has become obvious as their rookie seasons have come along. Turner has been one of the most pleasant surprises in this year’s draft and has won a starting spot on an Indiana Pacers team competing for home-court advantage in the first round. Okafor has put up big numbers on a miserable Philadelphia 76ers team that is still trying to figure out what their identity is and what type of core they want to build around. If you take a deeper dive into the numbers, you can see that Okafor is making a bad situation worse.

If you switched situations, Turner would be putting up big numbers playing 35+ minutes a game in Philadelphia while his outside shooting would present an interesting complement to Nerlens Noel ability to roll to the rim. Okafor would have a really hard time fitting in on a Pacers team trying to win - he’d get roasted on defense and he’d clog up driving lanes for Paul George and Monta Ellis, neither of whom want to spend most of the game spotting up at the 3-point line and waiting for Okafor to kick the ball out to them. If the 76ers pitched that trade to the Pacers, it would be a pretty short phone call.

Nine months after the draft, does it really matter whether Okafor went at No. 3 and Turner went at No. 11? The 76ers spent all season tanking in order to get a high draft pick while the Pacers made a doomed effort to fight for the No. 8 seed. And yet somehow the Pacers were the ones who ended up with the better prospect! This is not the first time this has happened for Indiana and Philadelphia either, as the Pacers drafted Paul George at No. 9 the same year that the 76ers drafted Evan Turner at No. 2.

That’s the difference between those two franchises. Philadelphia is trying to maximize their draft position in order to increase their odds of finding a superstar. Indiana is letting the chips fall where they may and taking the best player that’s available to them. The numbers would say that you aren’t likely to find a great player in the back half of the lottery, yet the Pacers unearthed Paul George and Myles Turner in that range. Those are two guys who could be the best two players on a championship contender and Indiana didn’t have to do anything too crazy to acquire them. They just had to scout well.

All the think pieces and all the debate and all the noise surrounding The Process have really missed the whole point. The Oklahoma City model only works if you can draft as well as Oklahoma City. The 76ers were willing to buck the conventional wisdom when it comes to how to build a team but not the wisdom about who should be drafted where. And if Myles Turner is a better prospect than Jahlil Okafor, what exactly was the point of everything that has happened in Philadelphia in the last three years?