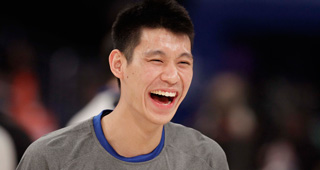 Source with knowledge of Knicks' thinking: "They will match any offer on [Jeremy] Lin up to 1 billion dollars.” -- Marc Stein

Thanks to the cultural phenomenon that was “Linsanity”, the New York Knicks resolved a contentious dispute with Time Warner Cable last season. The Los Angeles Lakers, meanwhile, recently agreed to a new cable deal that will pay them an average of $200 million annually.

The Knicks and the Lakers are enormously valuable media entities worth billions of dollars, which is why both franchises have been willing to open their wallet this offseason, despite the hefty new luxury tax penalties in the new CBA. The Lakers, who have nearly $80 million in salaries on their books for 2012-13, signed Steve Nash to a three-year $27 million deal. The Knicks, who already have $61 million in salaries committed for the 2014-15 season, have signaled they will match Jeremy Lin’s $29 million offer sheet from the Houston Rockets.

Because of their willingness to spend, both teams will put significantly better products on the floor next season. Combine their spending with the Brooklyn Nets, who took on over $250 million in salaries in the last week, and it appears the owners' attempt to reign in free-spending teams during the lockout has not had the deterring effect many of them (claimed) they wanted.

The Lakers, who have to pay Kobe Bryant $60 million over the next two years, could have been the poster child for a big market team brought down by the new CBA. That’s certainly what it appeared when they dumped Lamar Odom for a trade exception and a first-round pick last December. However, that same exception has now netted them Nash, a much better fit with their current personnel.

The Lakers' biggest problem in the playoffs was a lack of floor spacing around their three stars, as the Denver Nuggets and Oklahoma City Thunder liberally doubled off Ramon Sessions, Devin Ebanks, Matt Barnes, Steve Blake and Metta World Peace. With Sessions, who shot 4-for-25 from beyond the arc in the postseason, the Lakers were often playing 4-on-5 on offense; with Nash, one of the greatest shooters of all-time, they’re going to be practically indefensible.

If Los Angeles is able to acquire Grant Hill in free agency, they will have filled the two glaring holes in their lineup. Hill isn’t a great three-point shooter, but he is deadly from mid-range, and he’d give the Lakers a lineup with five offensive threats. They could have a starting five made up entirely of future Hall of Famers.

And while their post-centric lineup isn’t the best fit with Nash’s skill-set, he still gives the Lakers another shot-creator from the perimeter as well as someone Kobe can’t freeze out. Over the last two years, out of a bizarre combination of pride, necessity and stubbornness, Kobe has worn himself out amassing the highest usage percentage in the NBA. Nash’s offensive prowess, especially on a second unit with Pau Gasol, will give Kobe more rest and force him to swallow his pride and take a lesser offensive role.

On the other side of the country, neither the Knicks nor the Nets are currently in the Lakers' class as a legitimate title contender. Nevertheless, their budget-busting free agent shopping sprees will help revive basketball in New York City, which should feature two of the top-4 teams in the new-look Eastern Conference.

For many teams around the NBA, especially the Oklahoma City Thunder, who may have to break up their young core because of luxury tax concerns, the ability of big market teams to spend so extravagantly seems patently unfair. Yet there’s a reason the Knicks, Nets and Lakers have so much money: they have a lot more fans than teams like the Thunder.

As of the 2010 census, there were 19 million in the New York metropolitan area and 13 million in Los Angeles. In comparison, there were 1.5 million people in Oklahoma City. Any system which treats the interests of Knicks fans and Thunder fans as equivalent is inherently unfair and anti-democratic.

People on the coasts are often accused of elitism, but a hard-cap system like the one the owners presented during the lockout has staggering prejudices of its own. If Oklahoma City has an equal chance of competing for a championship as New York, that means the interests of one Thunder fan are worth that of ten Knicks and Nets fans! I moved from New York to Dallas a few years ago, but I don’t think it makes me a more important person than my friends who still live in the Big Apple.

An NFL-like system of parity wouldn’t make the NBA any more successful, if anything, by depressing the chances of high-profile big-market teams to make the Finals, it would harm the sport. The NFL is the most popular sports league in the United States because football is the country’s most popular sport, which is why college football, a wildly unequal sport with little to no parity, is as popular as the NFL in large parts of the country.

Over the last week, basketball fans in Los Angeles (Steve Nash, Lamar Odom) and New York (Jeremy Lin, Joe Johnson, Deron Williams and Gerald Wallace) have gotten the chance to see much more talented teams, which will help create new generations of basketball fans. And if Miami and Oklahoma City are going to stage a rematch of the 2012 NBA Finals, they’re going to have to go through the Lakers, Clippers, Nets and Knicks to do it.

The NBA is maximizing the possible entertainment value for as many of its fans as possible, which is a fundamentally good thing.