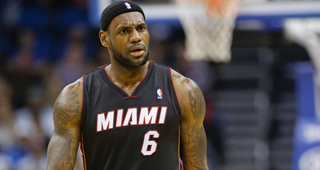 The NBA announced their second release of NBA All-Star voting returns on Thursday.

The current projected Eastern Conference starters are LeBron James, Carmelo Anthony, Paul George, Dwyane Wade and Kyrie Irving. None of the players beyond those five are within striking distance of cracking the starting lineup.

James is the leading overall vote-getter, while Bryant leads in the Western Conference.