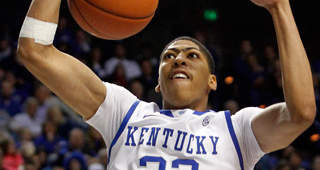 Anthony Davis hasn’t decided whether he will declare for this year’s draft.

“I really haven’t decided yet,” Davis said. “I’m just still worried about the season right now. The season’s not over. You can’t really worry about the future right now. So I’m trying to win a national championship for my team, and then when the time comes, whether it be this year or next year or whatever year, that’s when I’m going to have to sit down with my family and my coaches and decide what I’m going to do.”

Davis has been the consensus No. 1 overall pick for 2012 since his standout performance at last year’s McDonald's All-American game