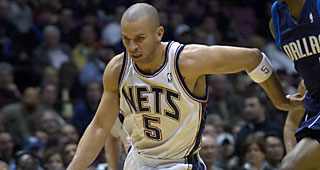 The East has been bad for three decades—to the point you wonder if Charles Dolan, Harold Katz, and Don Gaston went on a road trip and pissed off a witch in the summer of 1990—and it’s bad now, but the conference fully bottomed out in the early aughts. The Lakers were dominant, the Kings and Spurs were highly successful in wildly different ways, the Mavericks and Wolves were fun and flourishing, the Blazers were unsteadily rising, and both in comparison and in a vacuum, the East just sucked. Jordan was gone, obviously, but it was more than that: Shaq had left the Magic, Van Gundy’s Knicks and Riley’s Heat were spent, Reggie Miller got old and the Pacers receded. The Pistons that would go on to win a title in 2004 weren’t fully assembled yet. The Sixers were Iverson, Mutumbo, and not much else. Ray Allen’s Bucks had one splendid season and promptly lost the plot.

Fittingly, the most accomplished Eastern teams of that demi-era belonged to the league’s junkiest franchise: the New Jersey Nets. Coached by Byron Scott before the modern game melted him, in uniforms that aimed for ersatz class but instead achieved a kind of aesthetic nothingness, staging home contests in a swamp that ownership was already trying to escape, the Nets made the Finals in 2002 and 2003—giving the Spurs a genuine scare in the latter series—before the chorus of slide whistles sounded, Scott was fired midseason, and they resumed the sacred pastime of discouraging their intensely localized fanbase. It was a brief, not entirely glorious peak, and perfectly Netsian for that fact, but for a while the organization did truly matter, because they had Jason Kidd.

He was run out of Phoenix. In the space of a single season, Kidd struck his wife during an argument and Penny Hardaway waved a gun in his girlfriend’s face. So as to avoid developing a reputation as the NBA’s premier destination for slick-handling misogynists, Suns management put Kidd on the trade block in the summer of 2001 and swapped him out for Stephon Marbury in late June. (“This was a basketball judgment call,” lied Jerry Colangelo.)

Kidd was an established star at that point. He had made first team All-NBA three years in a row. If you needed a playmaking guard who also defended the hell out of his position, you literally couldn’t do any better, but it came as a surprise how suddenly he transformed the Nets from a moribund Guys repository into a title contender. In the thick of his prime, with everything you could want except a reliable jumper, it was still up for debate whether or not you could succeed with Kidd as your franchise cornerstone. “He has led a team into the second round of the playoffs only one time,” S.L. Price wrote in Sports Illustrated, “too few for someone whom even Suns general manager Bryan Colangelo calls ‘a winner.’”

This concern evaporated quickly, as the Nets finished with the best record in the East in 2001-02 and after a rocky opening series against the Pacers, dispatched with the rest of the conference pretty easily on their way to a blowout Finals loss against the indomitable Lakers. If Kidd’s Nets weren’t great, they became thoroughly credible the moment he showed up, and they were even better in 2002-03 as a young Richard Jefferson came into his own and they qualified for the Finals again following a pair of sweeps over the Celtics and Pistons. Kidd was the engine for all of this: he finished second in the MVP voting in 2002 and ninth in 2003. (He was actually a little more productive and efficient in the latter campaign. Don’t let anybody tell you the MVP isn’t a narrative-based award.)

The deep playoff runs and media plaudits solidified Kidd as not just a spectacular player, but a winning one. The more interesting aspect of his rise was the peculiar way he helped the Nets win so many games. The league was at a bit of an ebb in terms of top-line floor general types. The 90s were a two-guard’s playground. Isiah and Magic had retired. Stockton was slowing down. Gary Payton was awesome, but he was in a tier by himself, above your Tim Hardaways and Terrell Brandons. Iverson, of course, was not actually a point guard. Kidd reminded everyone what it was like to watch a guy dominate game after game with his vision and passing.

He was a cinematographer out there on the break and in the half-court. Jefferson, Kenyon Martin, Keith Van Horn, and Kerry Kittles were lit as flatteringly as they ever would be, limits disguised and talents amplified. Martin put up the best scoring numbers of his career with Kidd. Jefferson entered the league with no jumper and Kidd more or less erased that deficiency by hitting him on back cuts and alley-oops, delivering the ball in spots where Jefferson could put it on the floor and drive past scrambling defenders. It’s a difficult quality to describe, but Kidd was a savant in terms of understanding angles and spacing, when to slow down or speed up, being able to determine the difference, in a split second, between an open passing lane and one that’s about to snap shut. He tallied a ton of assists but he also simply and consistently put his teammates in advantageous positions. He hit them in their particularized shooting pockets; he rewarded good movement. If an opponent could be figured out, he figured them out. He took the less-than-special Nets as far as they could go, which was quite a ways further than most observers would have guessed.

The project stalled and disintegrated after those two title runs. Kidd had some knee trouble, K-Mart was traded away. Nets brass tried to build a winner out of a slightly diminished Vince Carter and a noticeably aging Kidd, which didn’t work. His legacy was complicated, in a good way, by the exemplary old head labor he contributed to Dallas’s title-winning team in 2011, but that part of his career felt cribbed from a separate existence—a guy who had figured the game out completely doing whatever his creaking body allowed. Jason Kidd in his prime was an altogether more visceral experience, doubly impressive for the fact that it was also so intellectual: like math rendered miraculously athletic and cool, a peculiar brand of superstardom, manifested in a peculiar venue, at a peculiar time. Where nobody wanted to be, Jason Kidd thrived in ways nobody else would have thought to. He couldn’t make those drab jerseys sing but everything else, it seemed, he could manage.