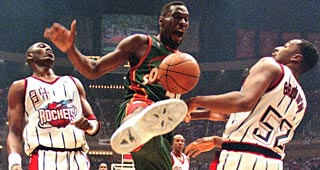 In the summer of 1995, running each day in the Seattle rain and the sweltering Indiana haze, retiring to the gym late at night to work on his jumper and lift weights, Shawn Kemp dropped 30 pounds. He’d bulked up the previous offseason, adding a thick sheet of muscle to throw against Karl Malone and Hakeem Olajuwon, but he didn’t like how heavy it made him feel. Though he had always been strong, his springiness was what made him special. He could get off the ground quicker than any big man in the league, and leap well above the rim. Put a certain way, Kemp spent the summer of 1995 reclaiming his gift.

Which didn’t mean he was fully comfortable with it. He told Sports Illustrated: “someone said to me ‘when I see Shawn Kemp, all I see is dunks. What else you got in your game?’ I just sat back and laughed, because laughing was all I could do. I wasn’t going to argue, but this year my game’s more well-rounded. I hope people see that.” It’s a case of the art failing to line up perfectly with the artist, how self-conscious Kemp was about the primal thrill of his on-court performances. He did his best work in the air, locking onto lobs and pulling down the rim as if he meant to snap it off and carry it out of the arena, but he also wanted to be able to deliver from midrange and find open shooters out of the double team. He was a blockbuster filmmaker yearning for indie cred.

You can trace this insecurity back to his high school years, when he was torching the best competition the Hoosier circuit had to offer. There’s a way some kids dominate at that level, where they’re so much more physically blessed than everyone else on the floor that their supremacy has a whiff of unfairness. Of course he’s killing us: he’s built like a 25-year-old marine. This sort of phenom, especially if he’s black, is almost always criticized for elements of his game that he hasn’t been forced to work on. (Why try to outfox your opponent when you can simply jump over them?) His footwork is lacking; he brings the ball too low in the post. He doesn’t understand basketball’s subtleties. The implication—the bitterest folks come right out and say it—is that he’s dumb.

Shawn Kemp had bad SAT scores and wasn’t able to academically qualify for Division I ball. Opposing fans chanted S-A-T, S-A-T! at him as he tore their team’s well-drilled defenses apart. This really bothered him: “I had people tell me I couldn’t read, couldn’t spell my own name. It hurt… I’m not dumb. I’m not stupid. But I just didn’t push myself [to do well in school].”

The damage was lasting. Kemp obviously delighted in throwing down dunks, but he was wary of the perception that he was a one-dimensional player. He wanted credit for his soft touch around the basket and tenacity on the glass—credit that never arrived in such abundance to meliorate his insecurities. The depressing aspect of this is that he truly was more than a dunker. You only had to watch his games to discover as much. His post arsenal, for instance, was limited but he clearly put some thought into it—the way he would throw his hip or shoulder into the defender and go up in one motion, converting the basket before his opponent could regain his balance. That’s a learned skill, as was his ability to get good position down low. He ran the floor hard and in the half court he made sudden land-grabs, screening for a shooter and then darting into the paint, swinging his butt around and getting low, establishing himself a mere two or three feet from the rim, range from which he was practically automatic. Anybody who called Shawn Kemp a brainless athlete only watched him on SportsCenter.

He worked hard too. You don’t remake your frame twice in one year by spending your summers drinking beer and eating barbecue. When people think of Shawn Kemp as lazy, they’re thinking of the version of him who showed up after the 1998-99 lockout at 315 pounds. This was the beginning of the end of his career, after he had forced his way out of Seattle and lost his sense of purpose. (Walking up and down the floor for Mike Fratello’s Cavs will do that to a man.) He was struggling with addiction issues that would soon come to a head in Portland, where he missed the tail end of the 2000-01 season after checking himself into a drug rehab clinic. This was the Shawn Kemp in the wilderness era, but he didn’t have those problems in his early and mid-20s, when his game was kaleidoscopically blooming.

In fact, the year after he shed those 30 pounds, he had his best season, averaging 19.6 PPG on 56.1 percent shooting, snagging a tick over 11 boards per night and getting to the line with tireless determination. Kemp hardly missed a bucket—69 percent from the field!—in the Western Finals against Utah and put up 23-and-10 in the championship series against Dennis Rodman, Jordan, and the 72-win Bulls. He even garnered three Finals MVP votes in a losing effort.

It was a heady peak for a player who hadn’t totally gotten his due up to that point, and who would become something of a denigrated figure as his career fell apart a few years later. For a brief spell, Shawn Kemp, long demanding respect and deserving of it too, was clearly visible for everything that he could do. And yes, his most ecstatic moment was a dunk. No matter the broad range of your abilities, if you can spin and slam over the toughest defender of your generation, you have an obligation to go for it.