Omer Yurtseven Is Embracing The Long Wait For The Draft 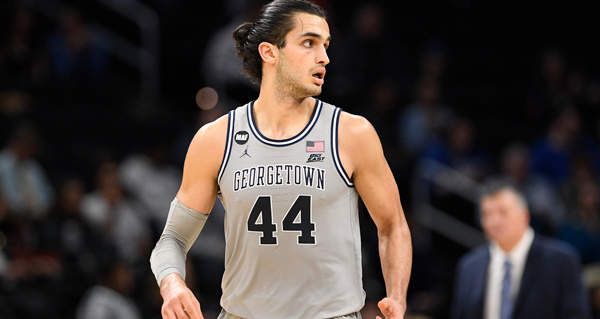 Even as the NBA has placed an increasing importance on versatile (read: smaller) lineups, an age-old axiom still holds true throughout the league: You can’t teach size. Each NBA draft features 60 picks, and about a third of those picks are still used to select big men. That’s good news for Georgetown’s Omer Yurtseven.

On its face, it would seem like Yurtseven is entering the NBA at a time when it would has never been more disadvantageous for a 7-footer. Despite the league downsizing, Yurtseven may find a home in the NBA. It’s his versatility as a big man that may get him that chance.

The post-up, back-to-the-basket dinosaur of yesteryear is almost extinct. The modern NBA center has to be able to move his feet to help on perimeter defense, and ideally to hold his own on switches. It’s that part of the game where Yurtseven has focused during what will be a gap of eight months between his last game with the Hoyas and the 2020 NBA draft.

Yurtseven told RealGM that he’s met with virtually with 19 teams.

“It’s been tough to not be able to work out directly for teams,” said Yurtseven. “I’ve spent a lot of time working on my lateral quickness. I know I needed to be quicker to play in the NBA. I worked on that a lot and can’t wait to show teams.”

Hard work is something Yurtseven comes by naturally, but not necessarily just in terms of sports. Yurtseven grew up in Turkey and his parents stressed education throughout his life. He rapidly outgrew his parents and found himself stuck in the goal on his soccer teams, due to his height. It was then that his attention turned to basketball, while school remained priority number one.

At age 15, Yurtseven made his professional debut for Turkish power Fenerbahce’s youth team. By the next season, he was making sporadic appearances for the senior club. At one point, Yurtseven scored 91 points and grabbed 28 rebounds in a single under-18 game. Shortly thereafter, he chose to come to the United States.

“It was important to me to play basketball in the United States and to get that experience. I wasn’t playing a lot at Fenerbahce, and I needed to play more. But more important than that, it was a dream of mine and my parents for me to get a college education,” Yurtseven said.

Yurtseven arrived stateside in 2016 and started in 14 of the 22 games he played for N.C. State as a freshman. Following that season, the big man declared as an Early Entry Candidate for the 2017 NBA Draft. He was testing the waters, without a real intention to leave NC State.

As a sophomore, Yurtseven scored 13.5 points on 57% shooting, to go along with 6.7 rebounds and 1.8 blocks per game. Once again, Yurtseven flirted with going pro, but decided instead to transfer.

Yurtseven sat out the 18-19 season as he transferred from NC State to Georgetown. This change was driven by his desire to play at a program known for developing big men and under one of its all-time greats. Yurtseven said the Hoyas’ tradition of great centers was a definite driver in his transfer: “Their culture and playing for Coach (Patrick) Ewing was everything. He was ahead of his time as a player, and he has NBA coaching experience. He knows where the game is heading. Having his pedigree was a pull.”

As a junior, Yurtseven turned in his best collegiate season with averages of 15.5 points and 9.8 rebounds per game. This time around, the pull to go pro was too strong for the now 22-year-old center: “I finished my degree in Psychology and completed mine and my parents’ dream. It was time for me to go play professionally.”

As a center, Yurtseven understands what teams will expect from him as a rookie: “Defense and rebounding. That will get me minutes initially.” While that may be what teams ask initially, it’s his offensive game that has Yurtseven under draft consideration.

Yurtseven recognizes that as well, telling RealGM he knows he brings skill to that end of the floor: “My shooting ability should translate. I’m able to face up. I can score around the rim. I have a good turnaround jumper too.”

Yurtseven knows teams are looking for big men who can step out and shoot as spreading the floor has never been more important. With that in mind, he’s taken over 1,000 jumpers a day, including many of them from three-point range. He said, “For seven months, I’ve been working on my game. A big part of that is my jumper. I’ve probably taken 35,000-40,000 jumpers a month.”

Vecenie said “Yurtsteven is a tremendously skilled offensive player at 7-foot with good touch and footwork. He can stretch out beyond 3-point range on his jumper. Ultimately though, I have significant concerns about his athleticism translating to the modern NBA. I don’t think he’s quick enough to switch out onto even bigger wings, let along the quickest guards the league has to offer. And he’s also not a particularly strong rim protector. I see Yurtseven having a monstrous, very lucrative career over in Europe, but would be surprised if he turns into a rotation-level NBA player.”

One NBA front office executive said “Yurtseven would have been a guy to see at the combine, if he got invited. He might get hurt by the lack of being able to do workouts in the usual way. We probably would have brought him in, because any big man with his offensive skills has value. We would have wanted to see if he had improved his quickness. He’ll be in the mix at the end of the second round, because he can really play on offense.”

Another front office exec told RealGM: “Yurtseven would be a priority guy for Summer League. He probably doesn’t get drafted, but you give him a camp contract right away. Guys that skilled on offense at 7-feet aren’t all that common. He’s someone who misses out big time on there being no Summer League.”

From his point of view, Yurtseven is embracing the oddity of this particular pre-draft process. He’s thankful for the amount of time he’s had to work on his game. Since finishing school in May, he’s stayed in the United States to focus on the draft. Yurtseven said, “I’ve been blessed to have this opportunity to finish school and then to keep working on my game the whole time.”

The lack of Summer League and the traditional pre-draft process hasn’t changed Yurtseven’s mind about the NBA. While he hopes to someday represent Turkey with the senior national team, he has no plans to play overseas as a professional at this time: “I want to stay as close to the NBA as possible. If I’m not drafted, I’ll go to the G-League or sign a Two-Way contract. I feel like I can earn a spot in the NBA.”

Sixty players will be drafted on November 18. Omer Yurtseven probably won’t know until fairly late into the night if he’ll be one of them. Even if he’s not, keep an eye on where he lands next, as the wait for his NBA shot may still yet be a short one.