Garnett, Duncan And The End Of An Era 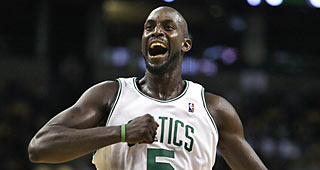 For the first time since 1996, neither Tim Duncan nor Kevin Garnett will be playing in the All-Star Game. The duo have been institutions on the NBA’s biggest stage, with Duncan making 13 consecutive appearances and Garnett making 14, behind only Shaquille O'Neal and Kareem Abdul-Jabbar in career All-Star berths.

Before Duncan and Garnett, seven-footers were automatically relegated to the center position while the best power forwards were anywhere from 6’6 (Charles Barkley) to 6’9 (Karl Malone). With the athleticism and skill-set to play the power forward position and the size of a center, the two revolutionized the game. Their teams could play two seven-footers at once, a huge advantage considering most NBA franchises struggle to find one talented big man that size.

Yet as impressive as their offensive statistics are, they made a bigger impact defensively. Duncan anchored an elite San Antonio defense for a decade, excelling at all three aspects of frontcourt defense: holding position on the low block, defending “stretch 4’s” on the perimeter and rejecting shots above the rim. Garnett was one of the most athletic seven-footers in NBA history, capable of playing elite individual defense at all five positions.

To replicate the impact they had on a basketball game, a football team would have to combine Peyton Manning and Ed Reed into one player.

Garnett/Duncan should have been the NBA’s answer to Nadal/Federer and Brady/Manning. Drafted two years apart, they were polar opposites in many ways: Garnett, one of the league’s most fiery and emotional players, was the first player in over a generation to jump directly from high school to the NBA; Duncan, a legendary stoic, was the last transcendent player to stay in college all four seasons.

But while Duncan was drafted by the San Antonio Spurs, one of the most well-run organizations in basketball, Garnett spent the majority of his career toiling away for the Minnesota Timberwolves. Minnesota, not exactly a free agent destination, never recovered from Stephon Marbury’s ill-fated decision to force his way out of town. And while San Antonio found Manu Ginobili and Tony Parker at the back end of the draft, the Timberwolves’ draft history in that same period is a study in futility: Paul Grant (1997), Rasho Nesterovic (1998) and Wally Sczcerbiak (2000).

Most baffling of all, they signed Joe Smith, a quality third big man hardly worthy of a franchise-crippling gamble, to an illegal under-the-table contract which ended up costing them three future first-round picks. Even now, three years after he was finally let go, Kevin McHale’s reign as Minnesota’s GM still haunts the franchise. The Timberwolves, a promising young team desperately in need of a defensive-minded big man, don’t have their 2012 first-round pick, which McHale gave up to acquire Marko Jaric in 2005.

With Garnett’s supporting cast consisting mainly of has beens and never weres, there was no one standing in Duncan’s way from 2003-2007. The Spurs won three out of five championships while falling inches short the other two times: losing on Derek Fisher’s 0.4 second buzzer in 2004 and Dirk Nowitzki’s and-1 in the final seconds of a Game 7 in 2006.

Duncan, an unspectacular player in a small-market who lacked a natural rival, receded in the public consciousness, as Dirk Nowitzki and Steve Nash, two extraordinary but one-dimensional offensive players, won three consecutive MVP’s. Instead of Duncan and Garnett becoming the Chamberlain and Russell of the 2000’s, the NBA and its media partners searched endlessly for the “next MJ”, with the spotlight flickering from Allen Iverson to Kobe Bryant, Vince Carter, Tracy McGrady, LeBron James and Dwyane Wade.

Jordan changed basketball by dominating from the perimeter, as everyone could dream of “being like Mike” in a way they couldn’t about a big man. His origin story, the kid cut from his high-school team who willed himself to greatness, resonated deeply in our collective subconscious, fueling an unprecedented amount of interest in the sport.

But in the 2000’s, Jordan’s revolution, at least temporarily, was rolled back. Shaq and Duncan won eight of nine titles from 1999-2007; the only other championship team in that period featured a four-time Defensive Player of the Year (Ben Wallace) at center and another 6’11+ player (Rasheed Wallace) with as much pure talent as Garnett and Duncan. Garnett, when finally given a chance to play with other All-Stars in Boston, won a title in 2008, while the Los Angeles Lakers and the Dallas Mavericks, two teams who played multiple 7’0 on their frontline, have won the last three championships.

Kobe Bryant, who tied Garnett and passed Duncan with his 14th consecutive All-Star appearance this year, will probably be remembered as the greatest player of their era. But while he has as many championships as both combined, he played with Shaq, the most physically dominant center since Wilt Chamberlain, for eight seasons. It’s hard to even contemplate how dominant a Shaq/Duncan or Shaq/KG front-line would have been.

If you asked all 30 NBA GM’s to pick one player they would want to build their franchise around from 1999-2011, Duncan and Garnett would go #1 and #2. And if you put every player in the history of the NBA into one draft pool, there would only be a small handful of names called before two of the most versatile seven-footers of all-time came off the board.