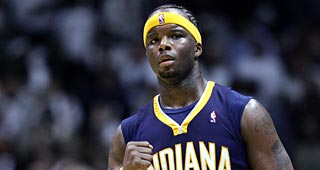 It never happened for Jermaine O’Neal in Portland. Blazers GM Bob Whisitt drafted him at age 17 and 17th overall in 1996, and P.J. Carlesimo didn’t know what to make of him, and didn’t really have to considering he was an unknown quantity blocked off by established players Rasheed Wallace, Arvydas Sabonis, and Brian Grant. The guy just didn’t play—a tick under 12 minutes per game over four seasons—and when even new head coach Mike Dunleavy, whom O’Neal was told planned to shake up the rotation when he re-signed with the Blazers after his third year, didn’t seem interested in what he had to offer, he forced a move to Indiana. Donnie Walsh saw O’Neal in the summer of 2000, running through ballhandling drills in his hometown’s high school gym, and thought wait, what’s this kid doing on the bench in Portland? He traded away low post boulder and fan favorite Dale Davis for O’Neal the following September. He was 22 when the Pacers grabbed him. This was, strange as it would have been to say at the time, a little late.

O’Neal’s career, viewed in hindsight, takes on the shape of a slasher film. Get out of Portland, Jermaine! There’s not enough time! Many of the modern NBA’s best players are 30 or older, and a good number of them have suffered at least one gnarly injury and come back more or less intact. Paul George missed nearly an entire season after shattering his leg. Russell Westbrook had three surgeries on his right knee in the space of eight months. Steph Curry’s ankles didn’t solidify until he was in his mid-20s. It’s not like injuries are no longer a concern—for instance, we have yet to see if Kevin Durant is going to make a full recovery after rupturing his Achilles in last year’s Finals—but a hard fall or a tendon tear, a bad back or a problematic knee, isn’t the death sentence it used to be.

O’Neal had his best individual season at 24: 20.8 PPG on 48.3 percent shooting, 10.3 RPG, and 2.3 BPG. This was his third year in Indiana. Walsh was right; the Blazers didn’t know what they were doing. O’Neal wasn’t just much better than Carlesimo or Dunleavy could have imagined; he had an ideal skillset for his era. At 6-foot-11, he could play either center or power forward, and while he wasn’t the most explosive athlete, he was so strong, smooth, and smart that it hardly mattered.

The NBA had legalized zone defense in 2001, but it was still a one-on-one game in 2003-04, and there weren’t many defenders who matched up well with O’Neal. Unless you had a superlative frontcourt stopper like Ben Wallace or Kevin Garnett on your roster, you had a problem, because O’Neal would take the loping fellas 14 feet from the basket and blow by them in space, and he would park the smaller dudes on the block and abuse them with soft hook shots he could release with either hand. And if you cheated toward the middle, he’d spin baseline and drain a short turnaround. He learned his footwork from early Maverick demi-great Mark Aguirre and there was a remarkable amount of polish to his game. He was handsome—his babyface, his impeccable braids. This is without mentioning that he was also one of the NBA’s best rim protectors. Rick Carlisle: “if Jermaine were into statistics, he could lead the league in blocks, but he’d have to break the rules of our system to do it, and that’s not the kind of guy he is.”

That’s a quote from the following year, when O’Neal was merely really good as opposed to far and away the best big man in the Eastern Conference. It was a superior season overall: the Pacers won 61 games. Ron Artest made the leap from incongruous talent to well-rounded treasure—narrator: this did not last long—and Al Harrington supplied buckets and boards off the bench. Carlisle was, as he is now, an excellent coach who figured out how to extract useful minutes from a backcourt that featured a 38-year-old Reggie Miller, plus Jamaal Tinsley and Anthony Carter running point. This was the East in the mid-aughts; beyond the suddenly Sheed-bolstered Pistons, it wasn’t teeming with worldbeaters. But O’Neal could have walked into any starting lineup. He made second-team All-NBA. Shaq: “he’ll be the dominant big man one day—after I leave.”

In a kinder universe, O’Neal breaks out even further the next year. He was 26. He and Artest formed an outstanding two-way combo. The front office had worked a sign-and-trade in which they swapped out Harrington for the more versatile and talented Stephen Jackson. That 2004-05 Pacers squad might have been a genuine title contender. Instead, as Satan clapped his hands like a small child at a carnival, Artest went into the crowd at the Palace at Auburn Hills, and that detonated Indiana’s season before it started. The Malice At The Palace exists outside of time, but it was also the ninth game of the year. The Pacers’ title challenge lasted the length of a pop song. Artest was suspended for the rest of the season. Jackson got banned for 30 games. O’Neal missed 15. He wasn’t throwing punches in the stands. He cussed out some fans who threw beers and sodas at him while he was walking down the tunnel to the locker room. But this was David Stern’s NBA. And it was Indiana, where even Reggie Miller was viewed with some suspicion. Artest was traded away in 2005, Jackson in 2007, and O’Neal in 2008.

The Malice is sometimes posited as the event that shattered the upward trajectory of that promising Pacers squad. This reading isn’t wholly incorrect—Artest was awesome but immediately toxic, and the same could be said, to a lesser extent on both counts, about Captain Jack—but it ignores the fact that O’Neal started to fall apart physically after that miserable null and void season concluded. His physical decline occurred independently of every other minor tragedy that was afflicting the franchise. Some shoulder stuff, some knee stuff. He couldn’t stay on the court consistently, and when he played, it was seemingly always at 80 percent. Well Jerry, it doesn’t look like O’Neal’s totally comfortable jumping off his right leg. That kind of thing. It was more common then than it is now. Less remarkable. Jermaine O’Neal was a significantly diminished player by age 30. He wasn’t a Pacer anymore either, freelancing for the Miami Heat in their post-title, pre-LeBron era.

This series has a title—Suspended Indefinitely, like Artest was initially—because banners are nice; they give the illusion of order. Really this is a dude sitting in quarantine Remembering Some Guys with less wit than David Roth, researching and riffing about players who were more—in the abstract and sometimes in reality—than they got credit for. There was also an entry on Kevin Garnett, because I read a bunch of pieces about what media folks made of him when he was coming out of high school and thought it was interesting. The series is about giving due and killing time. Some weeks feature worthier subjects than others.

I mention this in order to give weight to this statement: Jermaine O’Neal got the rawest cosmic deal of his generation. He sat in Portland, flourished in Indiana, and suffered through an aborted phantom season that could have seen him realize new heights. He could have even won a championship. Then he started to get hurt all the time. It sucked. “The fact is, I played on one leg for two years,” he told Sports Illustrated in the summer of 2008. He’d been traded to Toronto by then, ostensibly mentoring but more accurately getting in the way of a young Chris Bosh and Andrea Bargnani. This amount to at least one and a half indignities, which O’Neal understood better than anyone. He had been there, after all, when he was at the brink of greatness. And then nobody got to find out what would happen next, had reality not been so cruel.