The NBA fined Kenny Atkinson $25,000 following his ejection in the Brooklyn Nets 114-106 loss against the Indiana Pacers.

The league said he was fined for "verbally abusing game officials and failing to leave the court in a timely manner".

The ejection occurred following a non-foul call with the Nets down by 5 points with 1:09 left in the game.

Nick Nurse has been fined $15,000 for public criticism of the officiating.

Nurse made his comments to the media following the Raptors’ 95-86 loss to the Denver Nuggets on Dec. 16 at Pepsi Center.

Rudy Gobert was ejected with 9 minutes and 13 seconds left in the first quarter as the Utah Jazz defeated the Houston Rockets 118-91.

Gobert was called for a foul on James Harden, his second in the game. He then walked over to the scorer's table and smacked a water bottle in frustration, leading to the ejection.

Gobert was fined $15,000 earlier this week for criticizing the officials. 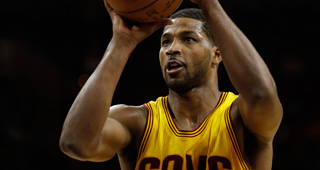 Tristan Thompson has been fined $15,000 for making an inappropriate gesture toward a spectator.

The incident occurred at the conclusion of the Cavaliers’ 99-97 victory over the Brooklyn Nets on Dec. 3 at Barclays Center.

Rudy Gobert has been fined $15,000 for public criticism of the officiating.

Gobert made his comments to the media following the Jazz’s 102-100 loss to the Miami Heat on Dec. 2 at AmericanAirlines Arena.