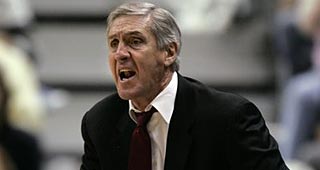 Utah Jazz coach Jerry Sloan was ejected in the third quarter Saturday night against Philadelphia after getting two technical fouls in a 30-second span.

Sloan felt the officials were favoring 76ers guard Allen Iverson and let them know it with an earful each time they passed the Jazz bench.

He got the first technical with 7:38 left in the third quarter after Utah's Keith McLeod was called for his fourth foul. Sloan stomped his foot and got a quick technical from official Derrick Stafford.

Sloan hadn't had much time to cool off just 30 seconds later when Deron Williams, who had replaced McLeod, received his fourth foul -- also while guarding Iverson. 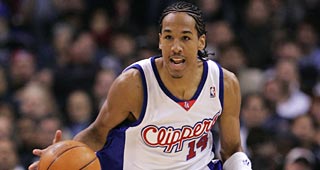 Trading for Indiana Pacer forward Ron Artest would either be a smart move or huge mistake for the Clippers.

The Pacers would want Maggette, whom the Clippers have declined to include in trade proposals.

Dunleavy and General Manager Elgin Baylor are fond of hard-working Maggette, whose scoring average increased his first six seasons in the NBA. Dunleavy and Baylor declined to comment on trade talks, but they have rejected offers for Maggette and second-year point guard Shaun Livingston, Clipper sources said.

"With nine out of 11 at home, we're at the stretch of the schedule we were pointing to all year long," Dunleavy said. "You never want to have injuries, and we hoped we would be totally healthy now, but everybody has injuries.

"If you make a move now, that you make because of injuries, you're making it out of desperation or panic. In my opinion, the only move we make has to be a move that we'd make without the injuries, because we have a lot of guys with a lot of upside." 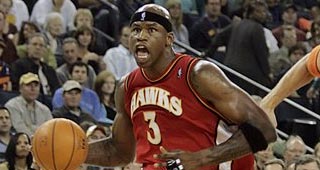 It's a faulty assumption, ESPN is told, to presume that Hawks free agent-to-be Al Harrington is certain to be dealt between now and the Feb. 23 trade deadline.

With the Hawks possessing the salary-cap flexibility next summer to match or trump any offers Harrington gets, they haven't abandoned the idea of extending the relationship. NBA front-office sources thus say that Atlanta won't part with the swingman before the deadline unless A) the trade fills a clear need and B) the trade delivers a first-round pick or two to replace the first-rounders that went out in the Joe Johnson extravaganza.

Letting Harrington finish the season in Atlanta would put the Hawks at risk for losing an asset without compensation, so his name will continue to circulate in trade scenarios. Yet the Hawks figure that, if they can't re-sign Harrington or even if they elect not to, they'll have opportunities in the summer to participate in a sign-and-trade to prevent losing him for nothing.

It's a stance that apparently helped convince Atlanta to withdraw from the original three-way deal that would have landed Ron Artest in Denver. The Pacers had some hesitation about acquiring Harrington, because the financial constraints in Indy these days would have made it tough to keep Harrington around, but the Hawks also decided that a package of Nene and Earl Watson wasn't sufficiently enticing given Watson's long-term contract and the absence of picks.

The Hawks, furthermore, will have a decent shot at signing Nene in the summer without giving up anything now for the injured Brazilian, who'll be a restricted free agent. 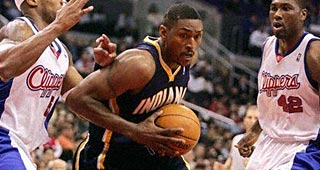 Minnesota is offering Indiana anyone on its roster not named Kevin Garnett in the hope of pairing Artest with KG. That's because the Wolves are as desperate as the Lakers to make a splashy move -- in their case to keep KG energized and confident in the club's direction -- and because they see KG and Artest (assuming Ron-Ron could actually be counted on) as a devastating combo.

If Artest wants to score more, as stated in his original trade demand, Garnett is unselfish enough to make that happen. And if Artest is ever going to defer to a teammate, KG also (theoretically) has the juice and presence to make that happen. The Wolves, though, have been trying to pull a third team into the mix to better their chances of assembling a package Indy likes. 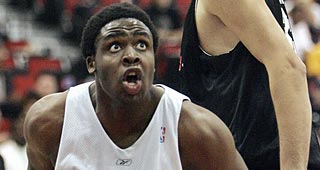 Golden State might actually have more pieces to deal directly with Indiana than any active suitor ... barring a change of heart from Jerry West in Memphis and an 11th-hour willingness to part with Shane Battier.

The Warriors also have a GM known for dice-rolling; just go back to last February's trade deadline when Chris Mullin was willing to take on Baron Davis in spite of a contract and health history that scared many teams off.

One sticking point here: Indiana would undoubtedly want Ike Diogu (see Box 2) as part of any package, and the rookie bruiser is approaching untouchable status already. 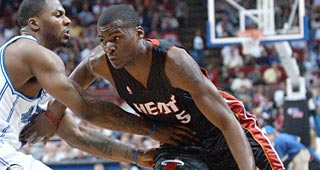 The news on the medical front for the Magic is not encouraging.

The Magic also have pushed back G Keyon Dooling's return from a right foot injury.

Cato has missed nine games because of injury. He sat out most of the preseason while recovering from left shoulder surgery in the offseason, then missed seven games because of a sprained right ankle.

Dooling has missed the past 16 games after sustaining a small tear in the tissue on the bottom of his foot. He missed five to begin the season.

The Magic had expected Dooling to practice full-bore next week and perhaps play. Now it appears he won't be ready until the club's West Coast trip Jan. 10-15. 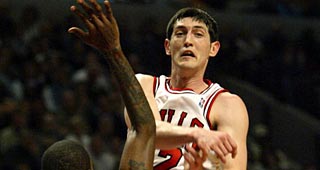 In an attempt to breathe life back into the Bulls for Saturday night's game against Phoenix, coach Scott Skiles will shake up his starting lineup, he said Friday.

Skiles did not reveal the changes but said they could be drastic.

Considering the Bulls have a young starting corps--the average age of the current starters is 23.2--there aren't many changes that could be viewed as radical. The most major would be pulling guard Kirk Hinrich.

Hinrich has been a steadying force for the Bulls since his rookie season out of Kansas in 2003-04. He started all but 10 games he played his first year, all 77 games in which he appeared last season and 27 this season.

Like many of his teammates, though, Hinrich is slumping. In their current five-game losing streak, Hinrich is last among Bulls starters in field-goal percentage (.350) and points per game (8.4). He was not available for comment after practice Friday.

After the Bulls lost to Charlotte on Wednesday night, Skiles told his players their ensuing practices would determine the starting lineup.

"Coach said, `We've been too married to the guys we have out there,'" Ben Gordon said. "`Nobody's spot is solidified. Everybody's spot is in jeopardy.'" 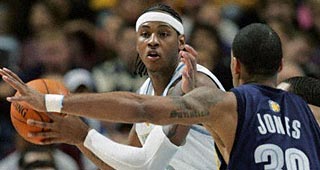 While few expected the Denver Nuggets would carry a sub-.500 mark into the new year, one can only imagine where they would be without Carmelo Anthony.

The third-year forward has eclipsed the 20-point barrier in each of the past 14 games and has pushed his scoring average to 24.8. But if Anthony is going to keep his streak alive tonight against the San Antonio Spurs (7, Pepsi Center, Altitude), he'll have to do it against a defender that has given him, and many others, fits throughout his career: Bruce Bowen.

"The challenge is always good going against Bowen," said Anthony, whose streak began after returning from a sprained left ankle that kept him out for one game and most of another. "He makes you bring out your best. He's a quick defender, good hands, good feet, so I'm going to have to try to get some easy ones on him." 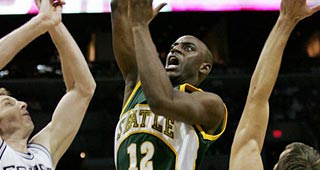 Throughout Damien Wilkins' first two seasons in the NBA, the needs of the Seattle SuperSonics have dictated how Wilkins has been used. This necessity has revealed Wilkins' ability to be an NBA regular, to play out of position at power forward and now to spend time playing point guard.

With the Sonics missing starting point guard Luke Ridnour because of nausea and backup Ronald "Flip" Murray hampered by two dislocated fingers on his shooting hand, Coach Bob Weiss turned to Wilkins as his backup point guard Wednesday in Minnesota and was pleasantly surprised when Wilkins scored a season-high 15 points and helped lead a second-half comeback by the Sonics.

"Wilkins came in and did a great job at backup point the last quarter of the game," said Weiss afterwards.

The performance earned Wilkins the nod as the starter for Thursday's nationally-televised tilt against the Denver Nuggets. Wilkins played 15 of his season-high 37 minutes at the point, finishing with 12 points, a career-high eight assists, a career-high-tying seven rebounds and three steals while playing outstanding defense as the Sonics came up with a 112-105 victory. 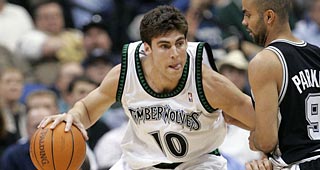 So it's open season on trade speculation on sports talk radio and around office water coolers.

Artest is the hottest name on the market until the Pacers decide where to ship the former all-star.

Szczerbiak is aware of the speculation.

"It's tough not to (be). It's circulating so much," Szczerbiak said. "But I think this team is just focused on what we need to do. The coaches are keeping us really focused on playing games. We're trying not to worry about that. The whole Artest situation, we have to realize as players, is you never know when a deal will get done.
"It's been known that Indiana doesn't mind leaving him on the (inactive) list all year. We just have to go about our business and play our game and try to get wins."

When there is trade talk involving Minnesota, Szczerbiak's name has been near the top of the list for years. As a former all-star who is a career 50 percent shooter, he is an attractive commodity.

"First of all, I try not to read the papers and not even get involved in it," Szczerbiak said. "You just focus on your job and what you're there to do. If it happens, it happens."

Arenas Scores 47, But Heat Get Win

Odom Is Firmly Staying In L.A.

Vandeweghe: No Hurry To Trade

Do Raptors Have A Deal For Mr. Rose?

Steph: I Want To Stay