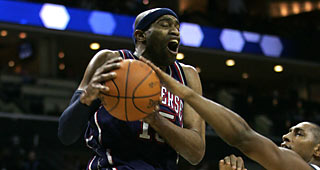 Vince Carter was ejected after arguing a call in the second quarter of Wednesday's game against the Detroit Pistons.

Carter was given a technical foul by official Derrick Stafford, then immediately given a second when he continued to argue. 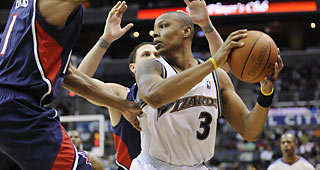 Caron Butler, who has missed the last three games, had an MRI performed on his left ankle on Wednesday.?

The results were consistent with the initial diagnosis (sprained left ankle) and he will continue to be listed as day-to-day.? Butler has averaged 21.0 points, 6.5 rebounds and 4.5 assists in 27 games for the Wizards so far this season. 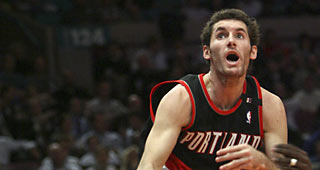 The Blazers started three rookies on Tuesday night for the first time since 1971 and still managed to beat the Boston Celtics 91-86.

Sidney Wicks, Larry Steele, and Bill Smith started for Portland in '71, and it was Greg Oden, Nicolas Batum, and Rudy Fernandez, who started in place of Brandon Roy. 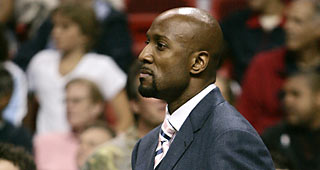 The Heat are expected to re-evaluate center Alonzo Mourning in two-to-three weeks.

At that time, Miami's doctors will attempt to decide on a timetable for his expected return to the court. 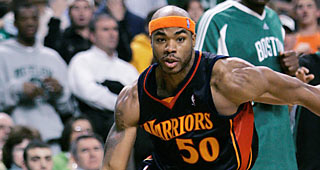 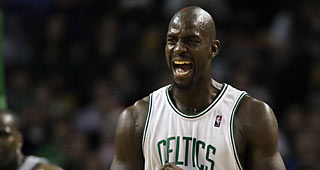 The Celtics have been accused of being a cocky and arrogant team, but Kevin Garnett says that the defending-champions couldn't care less.

"Hey, look here, man," Kevin Garnett said Tuesday afternoon. "We're not here to be liked. And when we're out there, a lot of times we're talking to ourselves. We're communicating amongst each other and it has nothing to do with the other team, and the other team likes to jump in or say little (expletive). A lot of that we let go. We don't even comment on a lot of stuff, because half the guys who are talking we don't even know their names.

"A lot of times we let our play do the talking. Doc (Rivers) doesn't really encourage us to talk. He encourages us to communicate amongst each other. But a couple of the times we do have conversations with some guys, now it's coming off like we're non-classy. But it's never told what's being said to us. I mean, class vs. class I can understand. But when you're dealing with idiots who don't know what they're talking about or guys who are just talking out their (tail) or just talking out their mouth, then that's a whole other level." 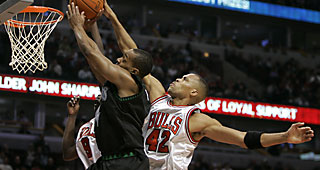 "My career ended June 17," Brown said of the day the Boston Celtics defeated the Los Angeles Lakers for the 2008 NBA title.

Brown had left a voice message to that effect nearly five months ago, on Aug. 7, but would never use the "R" word. 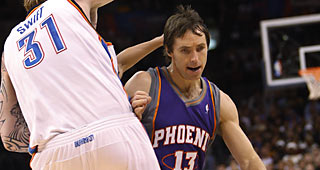 "There's a few situations out there that would be attractive, so I feel fortunate that there could be some possibilities for me," Nash said. "One would be for me to stay here in Phoenix. I've had a great 4 1/2 years here. New York, obviously, is our off-season home, so we love the city. It's a basketball mecca. Mike D'Antoni is there so there's a lot of attractive variables. And then Toronto, to go back to Canada to play for the home team, so to speak.

"I feel good that one of those three could really be a really strong possibility. Like I said, Phoenix would be the natural choice, just because I've been here and enjoyed success here and really feel at home here."

He attempted to keep his options open, though.

"Who knows who's going to be interested in two years?" Nash said. 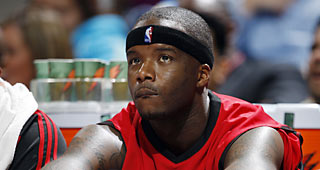 Jermaine O'Neal's status for Toronto's game against Denver on Wednesday night is in question because of flu-like symptoms and knee issues.

He suffered from flu-like symptoms on Monday and played only eight minutes in a loss to the Warriors. After leaving in the first quarter, O'Neal returned briefly in the first half, only to bang knees with an opposing player. 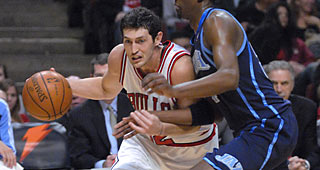 Bulls' guard Kirk Hinrich has confirmed coach Vinny Del Negro's disclosure that he is two to three weeks away from returning from right thumb surgery.

"That's what we're hoping for," Hinrich said. "So far I'm ahead of schedule. It just keeps getting stronger. I've been able to handle the ball and shoot. It's just a matter of picking the right time to let me start shooting around and full contact and stuff like that."

If Hinrich were to return in mid-January, he would far surpass Chicago's original prognosis of mid-February.

Knicks Get Assist From Bennett Salvatore

Barkley Arrested On Suspicion Of DUI

Hamilton Unlikely To Return Against Nets

Pietrus Out Indefinitely With Fracture In Right Wrist

Butler To Get MRI On Ankle Wednesday

Boozer Will Have Surgery

Carlisle: Defense Is Key For Mavericks

Bulls Could Get Hinrich Back In 2-3 Weeks

McGrady To Begin Sitting Out Back-To-Backs