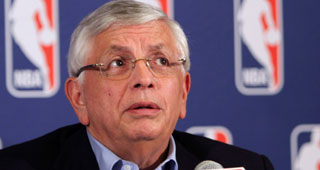 David Stern further articulated why the NBA decided to penalize the San Antonio Spurs with a $250,000 fine when the franchise did not bring four top players to a nationally televised game against the Heat.

"In the case of San Antonio, they didn't just come into town and rest healthy players, they sent a 26-year-old and a 30-year-old, plus Manu and Tim home virtually under cover of darkness ... and without notifying as our rules require for injury and illness," Stern said.

Stern also said that he doubts the players needed rest so early in the season, and that coaches have more room for such decisions later in the season.

''Maybe it's my mistake not to think that injury and illness when you're secreting someone away should also include deciding to move them out,'' Stern said. ''So in all of the circumstances, I thought that if we didn't do something this time, there would never be a reason to do it.

''(It was the Spurs') only visit to Miami, practically the first month of the season. Notifying nobody and sending home young and healthy players merited a rebuke and I did it.''