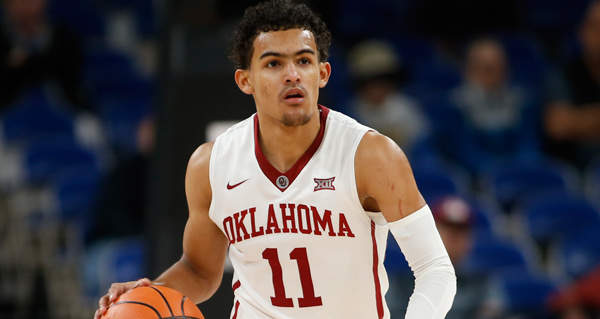 Trae Young ended his brief college career chucking ill-advised 25-footers as Oklahoma crashed out of the NCAA tournament in the opening round. He looked like a lot of talented 19-year-olds do, which is to say overwhelmed by the situation, trying to meliorate his fear by playing like he’d just watched Scarface and chugged an entire pot of coffee. Given the standard of coaching in college ball, it’s possible Lon Kruger couldn’t conceive of a better comeback strategy, but it wasn’t pretty watching Young do his Water-Damaged Steph Curry act as the deficit deepened and it became easier by the second to imagine him in a Magic or a Knicks uniform.

The lottery prospects who go to non-powerhouse schools—Young at Oklahoma, Markelle Fultz at Washington, Ben Simmons at LSU—cut isolated figures. They don’t have the talent around them that Duke and Kentucky recruits do, and they have every opponent’s full attention. They frequently develop bad habits, either doing too much themselves because that’s the only way their team is going to win or becoming sort of depressed, games passing like movies they’re not in so much as half-watching hungoverly from the couch. They drop out of school in the spring, like they’ve travelled upwards through miles of seawater to finally breathe air again.

This is, in certain ways, solid preparation for playing your rookie season on a team that isn’t going to be any good. Even with the addition of Trae Young, the Atlanta Hawks might have the NBA’s worst roster. They’re entering year two of a rebuild that won’t exit its teardown phase for at least another season or two. Young arrives as the squad’s starting point guard, because the Hawks dumped their previous starting point guard for a lottery-protected first round pick and the right to buy out Carmelo Anthony’s contract. He’ll be playing alongside Kent Bazemore, Taurean Prince, and a collection of cast-offs and young dudes.

It’s a bit of mystery why Atlanta isn’t a popular market for free agents, but it’s not, and given that fact, the multi-year tank job they’re pulling is sensible. Long-term, anyway. What coldly mathematical assessments of Process-like rebuilds gloss over is a group of players traipsing through a thunderstorm in their underwear for 82 games, outmanned nearly every night, playing at home in an empty building, sadly boosted by straw-clutching local media and more or less ignored by everyone else.

Young’s experience at Oklahoma wasn’t exactly like this—the Sooners were fourth in the AP rankings in January—but the second half of his season was doomy and unpleasant. He began to wear down and the rest of his team failed to pick him up, and as Oklahoma continued to stumble—lost to Iowa State and Texas, got run off the floor by Kansas, got bounced from the Big 12 Tournament early–Young became more NBA prospect than college athlete. You could argue that the same was true for Marvin Bagley, who made it as far as the Elite Eight, but he at least had played meaningful games right up until the end and had a real hope of winning a national championship. He was firmly grounded in the moment—and then Duke got knocked out and he went about preparing for the NBA Draft, as he was always going to do.

Young is already in possession of immense gifts: limitless range, a sharp handle, and (probably) better vision than he was able to show off at Oklahoma. These won’t be wasted in Atlanta next season, because he could stand to take a year just to adjust to the speed of the pro game, find out what does and doesn’t work at a highest level of competition, but there is limited utility in failing, which Young is being set up to do with great regularity. There’s an adjustment period, and then there’s slamming your head against a wall. Ask Kyrie Irving. Ask Victor Oladipo. Ask Tyreke Evans.

We don’t treat young players like they’re totally real. We understand what they can do now—once the initial thrill of wow, this guy is good wears off—as an indication of what they might be able to do several years down the line. This is fine as far as it goes. No harm in daydreaming, especially when a player is stuck on a lousy team. But we assume, maybe because we don’t follow these players’ gestation processes closely—because who the hell wants to watch the Hawks this upcoming season?—that the progress is linear and inevitable and we’ll see more of them when they’re ready, when Hawks-Celtics is actually an enticing matchup. Perhaps that will be the case with Trae Young. He’ll fight through this season, improve through the next, and in the meantime, his front office will help him out with some smart drafting and trade market wizardry. By 2021, he’ll make the All-Star team and the Hawks will make the playoffs.

That’s the plan, but then that’s the generic league-wide plan: have everything work out. It’s far from guaranteed. What’s assured is that Trae Young’s Hawks are going to have a rough season, something that’s survived rather than enjoyed, the overall scheme perhaps mechanically sound but somewhat misery-bleared in the midst of a nine-game losing streak. That’s the immediate thing, and Young’s ability to handle it, day by day, will determine where he’s at three or four years from now. It’s not a mysterious process, but it can sometimes seem that way, looking as far into the distance as we have a habit of doing. Young will know it, even if nobody else does, the fine grain of the ugliness he’s about to trudge through—get covered in—to get where he’s going.