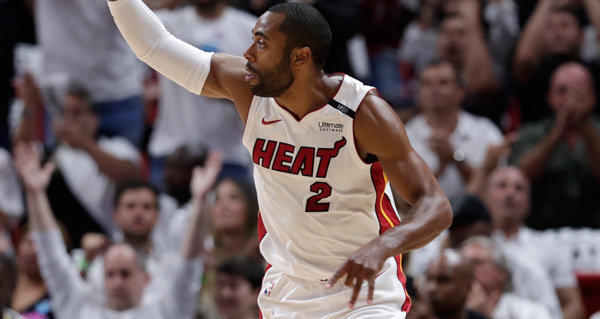 Some arcs fade into darkness and some stay faintly illuminated. Wayne Ellington arrived in Chapel Hill as Ray Allen, left for the draft as Cuttino Mobley, and has carved out an NBA career as something less remarkable than either of them. He’s a spot-up shooter. Stick him on the wing, in the corner, run him off screens. He receives the ball in space and fires it with solid accuracy. He’s not a natural defender, but he works hard—you have to, when you’re not a star. He’s played for seven teams in nine seasons, and this next year with the Heat will make it three years in Miami, as long a stint on one roster as he’s ever had, going back to his rookie contract days in Minnesota. On the surface, there’s not a lot to be made of Ellington. He’s a pro, the sort of player front offices and coaches like to have around but for whom they won’t go out of their way to sign or keep. This past summer, with no better offers on the table, he signed a one-year, $6.2 million deal to stay with the Heat.

It’s not a revelation that famous athletes are not necessarily interesting. Steph Curry, for instance, is the son of a moderately successful NBA player and has made himself into a much better NBA player. There’s no compelling narrative there. He wasn’t highly recruited and ended up attending Davidson… where he played really well. He had some ankle injuries early in his career… but they cleared up and haven’t been much of a problem since. He played for a record-setting team that lost in the Finals… and then they signed Kevin Durant and destroyed the league for the next two years. Watching Steph play basketball is awesome, but his life’s story is one of moving inexorably from Point A to Point B with minimal resistance. He’s a narcotizing interview. He’s not particularly political, by the standards his colleagues set. The most oft-cited Fun Fact about him is that he’s a scratch golfer. Which: Jesus.

This is not a criticism. Everyone has a right to be boring, and many people are. Most movie stars seem to spend six months per year shooting and promoting, and the other half of their lives carting kids around, redesigning their kitchens, and getting drunk more expensively than the rest of us. Our fascination with them is primarily about, not who they are, but what they stand in for: beauty, status, the desire for a heightened existence. They matter because they matter, and it means something when Jen Lawrence trips on a set of stairs primarily because we’ve decided it means something. What that is, precisely, isn’t clear. It may just be shared feeling.

Wayne Ellington is about as workaday as NBA players get, but there is, beneath his anonymity, a sort of hero’s journey to track. In a longish reported podcast with Sports Illustrated’s Rob Mahoney from last April, Ellington, in recounting his career, repeatedly alludes to what a tough time he had proving that he belonged in the NBA, before saying it outright: “I’m one of those guys that if you look back at what I’ve been through and situations, I’m not sure I’m supposed to be here in this league right now.”

That’s not false humility. Ellington was a late first round pick for the Minnesota Timberwolves right at the beginning of their hapless David Kahn-helmed era. His coach over his first two seasons was Kurt Rambis, who occasionally played him out of a position at point guard, for teams that finished with 15 and 17 wins in 2009-10 and 2010-11, respectively. Funny enough, he was traded to Memphis over in the summer of 2012 for another now-longtime NBA character actor: Dante Cunningham. 2012-13 was a lost year for Ellington. He played scant bench minutes for the Grizz for 40 games, then got shipped to a wretched Cavs team that gave him more floor time but essentially made no effort to resign him in the offseason. Ellington’s career bottomed out in Dallas the next season, where he picked up 37 DNPs and played just 8.7 minutes per game when Rick Carlisle saw fit to use him.

The summer of 2014 was when the meters were going crazy and the lights were blinking red for Ellington: 28th pick in a draft from six years ago, nearly 27, employed by several teams and valued by none. You can bounce right out of the league with that résumé. Ellington instead continued to float around, uneasily, playing one year with Byron Scott’s laughably bad Lakers and another with the then-directionless Nets. In other words, he took a job wherever he could find it, not making any noise but at least collecting a paycheck.

In the middle of this trudge through NBA irrelevance, November of 2014, Ellington’s father was shot and killed in a traffic argument. “I’m still working through it,” he said in August of 2016, in an interview with Heat beat reporter Ira Winderman. But he’s doing more than that. He’s got his own pet anti-gun violence campaign, The Power of W.E., and he has staged charity basketball tournaments in the offseason to promote peace in Chicago and his hometown of Philadelphia. More from the Winderman piece: “athletes and all entertainers, anybody that’s on the stage, that are watched, all should want to become role models.” This is from a guy who, at the time of speaking, had recently signed what could have very well been his final NBA contract. He still wanted to use his experiences and whatever notoriety he could muster to help other people.

Of course we now know things have worked out pretty well for Ellington in Miami. Erik Spoelstra knows how to use him—namely, having him run a million actions and encouraging him to shoot—and he’s on one of those insane South Beach workout regimens that lowers your body fat percentage into the mid-single digits. The NBA’s three-point explosion has helped too. Ellington never took more than 3.7 threes per game before joining the Heat. This past season, he launched 7.5 per game.

It remains to be seen how much longer Ellington will hang around. He’ll be 31 in November, and at the moment, he’s playing as well as he ever has. In the end, whenever it comes, he won’t have accumulated a career for all-time, or even one that’s going to be sharply remembered by anyone other than the League Pass-watching set, but several steps removed from the spotlight, Ellington has cleared an interestingly shaped path over the years, if you care to trace it.

The strange thing about being an NBA role player must be that you’re famous with a lower-case f. You’ve lived your entire professional life in front of television cameras, spoken for hours and hours into recording devices, performed if not at the very top of your field then close to it, and you are—what, exactly, to the public? The answer is specific; it depends on who you’re talking to. If you’ve been through the wringer like you have, you probably don’t get too exercised about it. You know who you are. You’re Wayne Ellington, and you’ve lived.