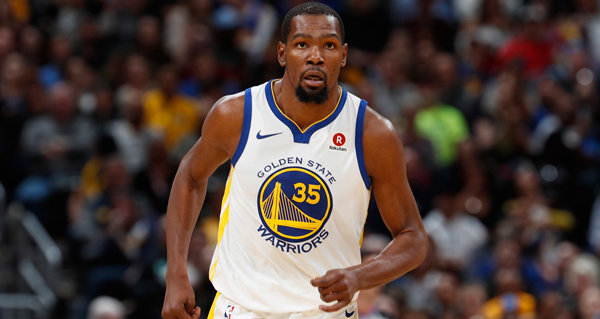 An Abridged History of Kevin Durant Acting Like A Cornball

July 3rd, 2017: Durant, talking about soon-to-be broken man Markelle Fultz’s game, praises his “hesi pull-up jimbo,” which Durant posits as deep basketball-knower speak that only true ballers will understand. This is like the “you ain’t got no life” aside from Rae Sremmurd’s “No Type,” except deeply lame.

September 17th, 2017: Durant accidentally criticizes his Oklahoma City teammates and former coach Billy Donovan on Twitter, revealing the fact that he has a number of sock puppet accounts that he uses to defend himself against criticism from random nobodies who jump into his mentions.

September 19th, 2017: He apologizes for disrespecting Donovan and the Thunder, but defiantly announces, in so many words, that he will never stop posting.

December 25th, 2017: After hacking LeBron James a couple times late in a close Christmas Day game, Durant goes on a peeved, largely beside-the-point rant about whether or not what he did would get called as a foul in a pickup game at a 24-Hour Fitness, punctuating it with “keep that s--- on Twitter.”

January 4th, 2018: Durant donates $3 million to the already obscenely wealthy University of Texas athletic department. The Longhorns reward him by naming their men’s practice gym The Kevin Durant Basketball Facility For Men. Presumably every member of the team who can’t recite General Patton’s speech to the Third Army has his scholarship rescinded.

March 28th, 2018: On the Bill Simmons Podcast, Durant complains at length about “blog boys” and analytics writers whom he apparently thinks just look at numbers and post-game quotes and don’t actually watch any basketball games. Presumably every internet scribe who has ever criticized Kevin Durant retires in shame, because he’s right: all these years, they’ve only been theorizing about what a crossover looks like.

July 18th, 2018: On C.J. McCollum’s podcast, Durant says some vaguely disparaging stuff—suggesting McCollum should come off the bench, telling him to “get out of [his] feelings”—which spirals into a pretty boring, weeks long middle-of-the-offseason beef. It’s not a good look for either party, but Durant is insistent that he’s winning the exchange, employing the always successful I’m Not Upset At All strategy while bugging his eyes out and speaking in a hostile staccato.

August 27th, 2018: Durant, coming off two consecutive media-awarded Finals MVPs, says he’ll never win Defensive Player of the Year because the media hates him. He then goes on to argue that obviously that doesn’t matter; he’s just happy he can be relied upon to guard every position on the floor.

This has all happened in a little over a year, and it is exhausting. The second-best player in the league, an MVP, a surefire Hall of Famer, a guy who left a good team for a great one in order to win titles and then went on to do exactly that, just cannot get over the fact that some people don’t like him.

On it face, this is a relatable flaw. One of the more vexing aspects of the human condition is knowing that there will always be folks out there who think poorly of you, who think you’re boring or obnoxious or ugly or stupid. Being famous probably only amplifies that anxiety, and admissions of insecurity, especially from somebody as immensely successful as Kevin Durant, can be reassuring, a sort of we’re-all-struggling-together sentiment that makes the world the tiniest bit easier to inhabit.

But that’s not really what Durant’s doing. It’s not a generous thing. He’s developed a persecution complex—erected a gaudy golden cross, hauled himself up onto it, and reveled in self-pity—while at the same time unconvincingly claiming that everything is going great and he doesn’t care what the public thinks, while yet still at same time employing the third grader’s debate tactic of Actually, Every Mean Thing People Say About Me Is Wrong. He reads his own press, and he doesn’t. The haters, which he can’t hear, are dragging him down.

This is contradictory, but it’s all legible enough. Durant feels attacked and doesn’t know what to do about it, so he deals with it in a bunch of ineffectual ways depending on what shade of dour mood he’s in. It’s miserable behavior, the likes of which we don’t see from other NBA stars, who no doubt catch plenty of bile and spite that alienates or depresses or enrages them. Durant seems confused about how to tackle a problem literally everyone he works with has more or less solved. He could delete his Twitter account, or hand it over to a social media manager. He could reject or ignore questions he doesn’t like. He could zoom out on his life and realize that all things considered he’s doing swell, that some people are jerks, and he’s got nothing to apologize for. Will any of this completely insulate him from criticism? Of course not. But it won’t actively make people more annoyed with him, as Durant has a habit of doing on a regular basis.

It’s extremely difficult to figure out who are you and learn to be comfortable in your own skin. That goes double for someone like Kevin Durant, a seven foot tall internationally known athletic genius who can’t opine about his favorite ice cream flavor without sparking a talking head show segment about whether mint chocolate chip is truly a winner’s desert. But part of growing up is trying to get your priorities straight, and in the process of thinking deeply about what’s important to you, you discover yourself—or at least what you are in relation to the world around you. You are, in some sense, what you care about and what you work toward. And everything else is sort of nonsense. Maybe you give it some of your time and energy, but you try not to let it control you. Durant is like if you got this simple truth completely backwards, and that’s why he’s such an aggravating figure. There’s no perfect way to live, and certainly no perfect way to be famous, but there are ways of getting it spectacularly wrong.

“It’s just pure hate for me, obviously.” C’mon, man. You know that’s not the issue.