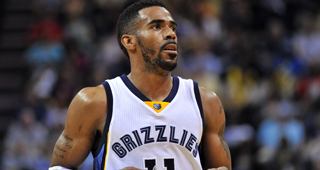 When I moved back to the old neighborhood, they’d closed down the 88-year-old Swedish Bakery up the main drag, and Illinois is swapping one baroquely corrupt billionaire for another this November, but the counter guy at the Lebanese place still calls me “boss” and throws a free baklava in my takeaway bag every once in a while. The best album I listened to this month is Mama’s Gun. I’m weighing up another run through Super Mario World. Netflix is putting out an Orson Welles picture. Timelines are scrambled. Things keep changing, jarringly, then in retrospect more subtly than initially reported. The rain floods the alleys and drains away overnight. I’ve been watching a lot of Tarkovsky lately. Those movies take forever. I’m always a little sad when they’re over.

Mike Conley has been a signpost. In the time it took for LeBron to switch teams three times, for the Warriors to evolve from a cursed joke of a franchise to a juggernaut, for Derrick Rose to rise and sink continually further through every ring of Hell, Conley’s been in Memphis, known as Greg Oden’s Buckeye running mate, a mild disappointment, an underrated star, and finally himself: steady and serene, with magnificent hair.

Except he wasn’t around last year, bothered by a bum left heel on which he eventually elected to have season-ending surgery after playing just 12 games. Without him, the Grizzlies weren’t themselves, Marc Gasol cutting the figure, mid-blowout, of one half of a friend pairing trying to play foosball with himself. The Grit & Grind era officially croaked in the summer of 2017, when Zach Randolph and Tony Allen left Memphis in free agency, but whatever was left behind was set to be Deeply Grizz in aesthetic, given that the team’s two most important players were still around. Instead, the Grizzlies were just another roadkillish tanking squad. Bad teams don’t have styles. Mario Chalmers returned to the NBA, played 66 games, and shot 37.9 percent.

We don’t know what to expect from Conley upon his return. The heel injury wasn’t a fluke; he’s also had problems with his achilles over the past few years. A 31-year-old guard with persistent foot problems is typically one on the decline. It’s possible this is the beginning of the part of his career where he fades, not everything working the way it’s supposed to, a half-step slower on drives, shoddier defensively, less able to create space for himself. It has to happen at some point, and right now would seem to be thereabouts.

There are two ways that things die: with you noticing, or not. I’d never actually been to the Swedish Bakery. (I don’t have much use for patisseries.) I knew it only as a local institution. And when it closed, I was living on the west side of Chicago, never thinking about it. The storefront is still empty and I worry more about what’s replacing it than anything. It sits close to a generic craft beer and arcade games bar. It’s a small and selfish thing, but as I walk northward to the grocery store, I’d rather pass an old bakery I don’t visit, septuagenarian ladies shuttling in and out of it with old world cakes and tarts, than a too-cute-by-several cupcake shop or a tapas joint.

Solidity is Mike Conley’s essential trait. Not solid like rigid, but solid like dependable. And dependability requires subtle adaptation. Two years ago, a decade into his career, David Fizdale took over as (short-lived) head coach of the Grizz and told Conley, who’d been regularly providing 15-and-6 throughout his cresting prime, that he needed his point guard to score more. Conley—no fuss—just sort of made it happen, and not by becoming even a whit gunnerish. You tell most players to look for their shot more, and they heave. Conley realized the instruction perfectly, giving the little aggression knob in his head a delicate quarter-turn. He took two more shots per game than he had the previous season, and bumped his scoring average up by five points. Against the Spurs in the opening round, he had the best playoff series of his career: 24.7 PPG, 7 APG, 62 TS%.

That Conley has been more or less out of commission since then is disappointing. He was right in the middle of finding a new level, at that perfect theoretical athletic age where the body hasn’t yet deteriorated much and the mind is as keen as it has ever been. Of course this wasn’t a league-tremoring crisis—like if Kevin Durant had heard something in his knee pop—but it mattered, in its way. It mattered a lot to me, anyway. Conley possesses pretty much everything I like in a basketball player: a well-rounded game, calm implacability, warmth, left-handedness, etc. It’s not so easy to explain. You get attached to players for certain reasons, and then after many years become attached to your own attachment.

I once ate something from the Swedish Bakery. They sold limpa to the local diner, Svea, a place I like very much because they serve bottomless mediocre coffee and dynamite eight-buck breakfast. I ordered a smoked salmon smorgasar, an open-faced sandwich done up sort of like a New York bagel, on the slightly sweet rye bread. I remember it as one of the best things I’ve ever eaten, if not by any objective measure then in the way the right meal on the right day lives with you for a long time. My golden-haired girlfriend and I talked about nothing ecstatically for 45 minutes. It was the kind of Saturday morning that exists in songs and movies and very rarely in real life. I don’t know whose limpa Svea’s using these days. It’s possibly just as good or better.

Really all that happens is time passes. It’s not complicated—aging, erosion, entropy—but it’s still impossible to completely get your head around, however closely you’re paying attention. You want something to anchor you in time. There’s nothing to anchor you in time—not permanently. Maybe Mike Conley will come back this year and play great. That would be something, at least, to hold onto for a while longer.