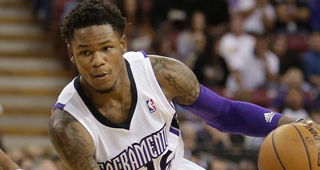 You can hear, if rarely clearly see, Ben McLemore’s career. It’s the sound of far-off spinning of wheels, an engine turning over, tread clogged with mud. It’s fitting that he’s back in Sacramento after a year-long interregnum with the Grizzlies, reacquired via a trade in which he was arguably a mere throw-in. Sacramento is as close as the NBA has to a faintly audible nowhere—an alley perpetually three alleys over, and maybe underground. Perversely, it’s where McLemore belongs.

The arc of McLemore’s night-to-night minutes count last year tells a dismal story. Early in his Memphis stint, before it became evident Mike Conley would barely participate in the season and the Grizz weren’t going to come close to a playoff spot, when they thought McLemore could provide some offensive spark off the bench, he played about 20 minutes per night. Then, as the coaching staff—David Fizdale, then J.B. Bickerstaff—began to realize he didn’t contribute much, he picked up some DNPs, and when he did see the floor, it was in shorter bursts, about 15 minutes per night. On the back end of the season, once the Grizz had an active interest in losing games, his minutes went back up to 24 minutes per night, and he even got a handful of starts.

It’s unclear what McLemore’s role will be with the Kings, who almost definitely won’t have their first-round pick next year and will be trying to land as high up the Western Conference standings as possible, if not exactly mount a playoff push. He might have no role at all. Sacramento's guards heading into training camp: De’Aaron Fox, Buddy Hield, Bogdan Bogdanovic, Yogi Ferrell, Iman Shumpert, and Frank Mason III. McLemore is… maybe better than Shumpert and Mason? It’s not a sure thing he can beat out any of those guys. He still has some upside, at 26, but while there’s time for him to improve, he hasn’t done much of that so far in his career.

The same things Kings fans complained about throughout McLemore’s rookie deal, Grizz fans became intimately and unhappily acquainted with last year. McLemore is theoretically a floor-spacing spot-up shooter, but he’s only made 35 percent of his shots from deep over his career. Scouts raved about his athleticism when he came into the league, but he’s athletic in ways that don’t matter: he has good straight-line speed and can leap really high. He’s not exceedingly laterally quick, nor is he strong for his size. He can’t create off the dribble, though he does try, which accentuates the problem. More than anything, McLemore doesn’t have a feel for the game. This is sometimes a vague criticism people lob at competent players that frustrate them in ways they can’t articulate, but it explains McLemore’s struggles well. Put simply, the guy doesn’t know where to stand at any given time. He blows defensive rotations; he doesn’t cut intelligently. If you keep your eye on him for any extended amount of time, you realize he is always waiting for something to happen, and often reaction too late as a result. You’ve got to be able to think at least one or two steps ahead to avoid embarrassing yourself on an NBA court. McLemore seems to completely lack that ability. He’s got no vision.

Big, dense paragraphs of weaknesses like the one above feel mean to write. You want to find something nice to say, or even better, something you’ve seen in a struggling player’s performances that cause you to light up and think if he did more of that, he might make something of himself. The junky energy power forward develops a half-decent hook shot, the mediocre wing starts to make the extra pass instead of shooting a contested jumper. If McLemore has made any of those kinds of minor improvements to his game, I haven’t seen them. (Maybe a Grizzlies fan or two did last year.) You can’t look after everybody, even baby-faced guards who project an affectless, Buster Keatonish pathos that makes you want to protect him from his own failure. McLemore is floundering somewhere in the NBA ether, on a team that’s near-certain to lose that night, and elsewhere the Blazers are playing the Rockets. You try to allocate your attention in ways that won’t bum you out.

It’s obviously not a coincidence that most NBA careers hit their nadir and extinguish in far-flung corners of the league. If you’re a deep-bench player for the Warriors, and they decide not to re-sign you over the offseason, you’re probably going to get at least half a shot for an ambitious lottery-dweller, because you bring championship experience, or you haven’t had a chance to fully express your talents because Steph Curry was taking all your minutes, or whatever. Teams talk themselves into that kind of thing. A player like Ben McLemore: he’s fallen all the way down and the rest of the league has watched every step. His career hasn’t been impressive or intriguing. It hasn’t contributed to winning. To believe in McLemore at this point is to have blind faith that there’s some mysterious power within him he hasn’t yet revealed.

Anthony Bennett, McLemore’s draft classmate and fellow bust, last played in the NBA with Brooklyn in 2017. Jonny Flynn washed out with a miserable, coach-firing Blazers team in 2012. Darko, a single game with a decent Celtics squad aside, finished up his NBA tenure with a 2011-12 Wolves team in the middle of the Checked Out Rick Adelman Era. You can just about tell when the end of the line is coming, when there might not be any more contracts after this one. McLemore is in the final year of a two-season deal he signed with a team that used him as a tanking tool and disposed of him immediately afterwards. This is what staring down failure looks like, right before things turn around or go all the way dark: Ben McLemore in a Kings jersey, trying to keep alive what’s festering and cold. It’s crushing human drama, playing out somewhere in the armpit of your League Pass listings. I won’t be watching, and neither will you. Ben McLemore is not what we come to sports for, unless he’s about to pull off something we don’t expect.