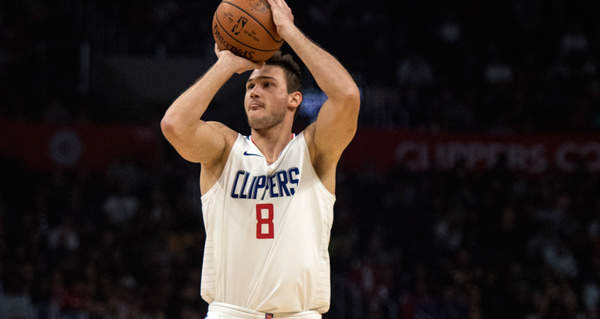 It seems like an entire phylum, but it’s possibly only like five or six guys. Rudy Fernandez and Boris Diaw come to mind: chimeric European players who flashed but never realized their full NBA potential. Darko doesn’t belong because Darko is way more interesting as an idea and a folk hero than he ever was as a basketball player. Drazen Petrovic was at the peak of his powers when he died young, but we did at least get to see what he could do. Arvydas Sabonis showed up stateside a shell of himself. Dino Rađa’s inclusion is up for debate. The players in this group—abundantly skilled, mildly inscrutable—haven’t necessarily had bad careers so much as ones that didn’t match what we imagined they could be when they broke onto the scene. There really was a moment there when Rudy Fernandez looked like Spanish Manu Ginobili. It lasted for a single season and he was back in home country by his late twenties.

His playing days aren’t over yet, but we can safely designate Danilo Gallinari as an all-time Chimeric Euro. The guy’s got a jumper true as math and a lower body that wants him to take up knitting as a vocation. He signed a moderately lucrative contract with the Clippers last summer and was supposed to be a big part of their post-Chris Paul plans, but ended up playing just 21 games due to a torn glute, then a fracture in his right hand. If you count the 2013-14 season, which he sat out entirely, rehabbing a torn ACL, Gallo has missed 323 games over his 10-year career. He’s had, if you want to call sitting out fewer than 20 games in a year a healthy season, only three healthy seasons. He unofficially leads the league in staring off into the middle distance beside an on-screen graphic that reads Legs Basically Don’t Work (4-6 weeks).

It’s not like Gallo has been consistently great when he’s been at full health. He’s a prototypical no-defense stretch big who has scored 15 points per game and shot a tick under 42 percent from the field over his career. He’s basically a homeless man’s Kevin Durant, which isn’t, on its face, something to get all that excited about. But averages don’t explain Gallo, because his numbers, when you zoom in, are all over the place on a night-to-night basis. Some of it is he’s played a lot of games at less than 100 percent, and some of it is gunnerish randomness, but Gallo stands out in the mind because, if you catch him when he’s hot, you would think he belongs on an All-NBA team. He’s put up 25 or more points 54 times in his career. (For comparison’s sake, Jeff Green, who has career averages similar to Gallo’s, has had 48 such performances while playing 300 more games.) There is a sense, when Gallo is hitting step-back jumpers and spinning baseline to the basket—maybe it’s residual Knicks hype still clinging to him after all these years—that he is supposed to play like this all the time. His natural state is also a heightened one.

Athletes who can’t ever get themselves healthy, who are permanently in and out of the lineup, stringing a few good weeks together before coming up lame, evoke a peculiar sadness. Gallo is six-foot-ten with improbable grace (a guy that gangly shouldn’t move as fluidly as he does) and power (for a scrawny fellow, he hammers the rim on dunks), and those prototypical Euro big man skills: soft shooting touch, a decent handle, natural footwork. He’s got his limitations, but when he puts everything together, he makes beautiful sense. You look at all he can do and think he’s a star. It’s unusual to be as awesome at basketball as, say, Carmelo Anthony in his prime, but it’s also notably rare to be talented enough to approximate Prime Melo every once in a while. The ability to even occasionally glimmer in the right light is worth celebrating.

And 323 times, Danilo Gallinari hasn’t been given the chance to shine. He is by any measure superhuman, but also exceedingly fragile, a flaw which frequently renders his superhumanness moot. That’s frustrating at best, and at worst cause to slip into a deep depression, laid up in a suit on the sidelines, weeks or months from your next game action.

Of course no player deserves to become any particular thing, and Gallo’s doing okay. The two seasons he had in Denver, before he signed with the Clippers, not uniformly healthy by any stretch but not disastrously injury-pocked, marked a turning point in his development. He didn’t transform into a revelatory inside-outside force, but he put up 19-and-5, shot nearly 38 percent from three-point range. He also tended to run the show in crunchtime, draining a few game-winners, feeling himself a bit, making jubilant it’s over gestures for the cameras.

He’s 30 now, and it’s apparent that he’s not going to be a star—not every night, anyway. But if he could rediscover his late Denver form this season, on a Clippers team that’s a likeable hodge-podge of intriguing young guys and good-not-great veterans, and play something like 60 games, that would be about as much Danilo Gallinari as we could ask for. That would be him delivering on a modified-by-experience version of the promise we glimpsed when he first arrived in the NBA. It would certainly be something to behold, if not everything we hoped for what seems like a long time ago.