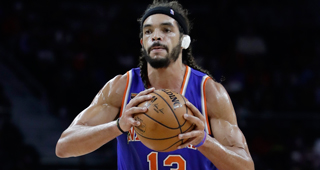 “What was once the most luxurious hotel on the coast of Normandy is a monumental monstrosity half sunk into the sand… But there are still some indestructible ladies who come every summer and haunt the immense edifice.” — W.G. Sebald, The Emigrants

It probably couldn’t be done now, given that so much of the game has moved beyond the arc. The efficiency threshold you have to break, in order to win any games at all, is higher these days. But then again, it didn’t look simple or viable a half-decade ago, when the Chicago Bulls gave the ball to a big man who couldn’t shoot—couldn’t blow by many people, wasn’t a dependable finisher when he did reach the rim—and ran their offense through him. In the wake of Derrick Rose tearing his knee in 2012, sitting out for long stretches of the next few seasons, and never returning to form for any extended period of time, Tom Thibodeau sought to fill the playmaking void by deploying Joakim Noah, a defensive specialist with an ugly tornadic jumper, as an unlikely point center, whom opponents guarded from three feet away. With the benefit of hindsight, we know this was an inspired move, but in the moment it was wild and unlikely. It seemed not to be happening even as it was.

In part because there’s a workaday quality to Noah. He lacks the deep-down awesomeness of a LeBron James or a Kevin Durant, who operate at the limits of human possibility. Where LeBron and Durant can be explained, when they’re really cooking, only tautologically—of course he can whip the ball cross-court, one-handed, directly into Kyle Korver’s shooting pocket; he’s LeBron James—Noah has always shown his work, calculations made frantically and imperfectly, disaster narrowly averted. Professional basketball looks difficult for him.

Which is to say he was, at his peak, an inordinately accessible star, both fun to watch and not impossible to relate to. Nearly all great athletes are, beneath their charm, ultimately alienating figures. They present a discouraging model for living, because possessing immense talent and a 99th percentile work ethic isn’t something you can aspire to. This is fine as far as it goes. I wouldn’t want to live in a world without people who are fundamentally better than I am. But, maybe you are like me: the fact that I’m a consumer of genius and not a font of it occasionally depresses the hell out of me. I’ve set books down in the middle of beautiful passages and sighed my lungs empty, overcome by envious despondency, at what’s in front of me that I’ll never possess. You want to make yourself useful in the world, and sometimes others’ greatness only makes you feel small.

This is a good time to point out that Joakim Noah was not some massively overachieving scrub. He’s a six-foot-eleven dude born with the lateral movement of a guard. It’s not like he didn’t have gifts. But by NBA standards, he had sizable holes in his game, and those gaps in skill rendered what he was doing—more or less inventing a position, keeping the Bulls’ heads more than above water while they were missing their best player, finishing fourth in the MVP voting in 2014—a rare blend of astounding and legible. He would get the ball near the free throw line, and you would see the options that weren’t available to him.

He probably wasn’t going to shoot. He would drive only if a defender was running at him. He had a solid enough handle to feint and kick up some chaos, but not to truly explode toward the basket. Noah had to be creative within narrow margins. He mastered the dribble-handoff, to get teammates some breathing room. He found cutters and tossed alley-oops. More than anything, he developed a knack for throwing passes at unexpected moments and odd angles, playing between the defense’s rhythms. Half-second hesitations, touch passes, side-armed scooping deliveries. Like an aging junkballer mixing up his pitches, or a middle-of-the-road intellectual carefully unspooling the one brilliant idea he might have in his life.

As his offensive repertoire expanded, Noah continued to thrive defensively, where his talents were more obviously applicable and the aesthetics of his play made more sense. Great defense is supposed to look difficult. He cleaned up from the weak side, locked down the entire paint, jumped passing lanes, attacked the glass, bodied up bigger centers and quicker forwards. And he was brutally antagonistic: a shouter and a snarler. No matter how much his renown as a skilled and intelligent player grew, his edge continued to define him. He threw a nice pocket pass. He cussed opponents out with Scorsesean verve.

Cut to now: he’ll be out of the league soon. Noah is an ancient 33, playing on a lower body that’s all blown shocks and cracked cement. He saved a lot of those Bulls seasons on a bum foot, refusing to sit when his plantar fasciitis was flaring up. You can’t gut that kind of thing out forever, and Noah, bored and loathed by management in New York, doesn’t have much interest in doing so anyway. The contract he signed with the Knicks two summers ago, universally panned by the NBA commentariat at the time, has unsurprisingly turned out to be a gold watch. He played seven games for New York last season, agreeing in February to go on paid leave because he wasn’t contributing anything to the team. The Knicks plan to cut him before the regular season starts, and while ex-stars like Noah tend to stick around the NBA for longer than they should, on name recognition alone, nobody’s in the market for a broken down, checked out big man. If he ends up making a roster this season, it’s because some general manager has fooled himself into believing that’s not what Noah is.

We all, no matter whether we find relevance in the first place, find irrelevance in the end. We are overcome by our own shortcomings, or age, or illness, or injury, or the will to do what we once did leaking out of us as if through a punctured tank. The light, once bright or dim or invisible, goes out. And you don’t get to leave yourself behind, exist in the moments when you were most sharply realized. Nobody transcends.

Joakim Noah doesn’t appear to sweat this too hard. Here’s a recent picture of him beaming and mugging with Josh Brolin and John McEnroe. Noah hasn’t forgotten how to have fun after falling off. In fact, he might be one of the rare great athletes to have a better time in retirement than he did during his playing career, considering how miserably busted his body has been for a few years now, considering that he’s never been shy about enjoying himself away from the court. This too presents a superior model for living than LeBron or Durant ever will: what remains after the best days are seemingly past doesn’t need to be shot through with a sense of loss or sadness. It can be taken for what it is, rendered meaningful in its own way—not a haunted waste. All we’ve got is what we have to work with at any given time. Making peace with that is difficult, but maybe achievable. It is something anybody can strive for, at least.