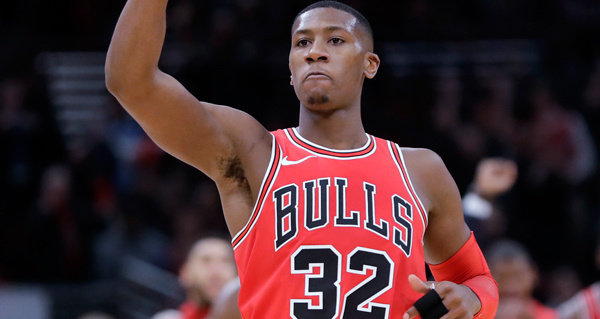 Kris Dunn looked alarmingly terrible in Minnesota. The plan was he would come in, as a four-year college player—a known quantity, if not a high ceiling prospect—and, perhaps in his rookie season, perhaps the season after, take over the Wolves’ starting point guard job from Ricky Rubio. It’s difficult to describe the extent to which this didn’t happen. It was like watching somebody’s parallel parking job end in a blocks-long traffic fire. Rubio was mediocre in 2016-17, but Dunn was way worse, shooting 37.7 percent from the field, offering little in the way of playmaking, and generally looking like the NBA was several steps faster than he could handle. He was traded the following summer as a throw-in component of the Jimmy Butler deal. This requires some emphasis: the fifth overall pick played so poorly in his rookie season that his trade value became Sure, We’ll Take Him, I Guess.

Did you remember that C.J. McCollum wasn’t any good until his third year in the league? I apparently conflate him in my mind with his teammate Dame Lillard as a guy who played all four years in college and then stepped into the league and was pretty effective right away. That wasn’t the case at all. McCollum was hurt for most of his rookie year—lingering effects of a foot injury he suffered at Lehigh—so that goes a way toward explaining his 38 games, poor performance, and limited minutes. But he didn’t do anything in his second season either, averaging 6.8 PPG on 43.6 percent shooting, contributing basically nothing but floor-spacing and the ability to bring the ball up the court. In year three he finally took off and became the sweet-shooting combo guard we’re now familiar with.

The point being, not that Kris Dunn is going to develop into a C.J. McCollum-level talent, but that adjusting to the professional game takes time, even for more seasoned lottery picks. Dunn showed some promising signs last season, on a Chicago team that was the right kind of lousy for a player who’s trying to figure some stuff out. He was installed by Fred Hoiberg as the Bulls’ starting point guard in late November, and his supremacy at that position went largely unchallenged. (What, Jerian Grant was going to take his job?) He got to play every night for long stretches, finishing the year with just a tick under 30 minutes per game, and was put in charge of getting the team into their sets on offense. And y’know what? With a little confidence, and a little more experience, he did okay: 13.4 PPG, 6 APG, 42.9 percent from the field, 32.1 percent from three. That’s something to build on, at least. It’s the statline of a guy who definitely belongs in the NBA.

This is without mentioning that Dunn is evolving into an awesome defender. He’s not a top-tier athlete, but he reads opponents well one-on-one, and he’s got a seven-foot wingspan that’s a nightmare for the league’s weaker ballhandling guards and helps keep tough assignments sufficiently swaddled. He reminds me of circa 2010 Rajon Rondo if Rondo had ever decided to defend soundly for an entire game instead of hunting for steals and taking possessions off.

Perhaps Kris Dunn will break out this year. Perhaps he’ll remain a merely useful player. That either thing is possible speaks to how much he’s grown since those not-at-all long ago Minnesota days when he was disastrously fawn-like.

It makes sense that most NBA franchises, when they’re picking near the top of the lottery, want a 19- or 20-year-old who may not be particularly polished but has the potential to become a star one day. Most general managers these days are long-term thinkers. If they’re not contending for a title right now, they’re thinking about the shape of their squad over the next handful of years rather than just the current season. A lot of fans—armchair GMs, all of them—think this way too. This is a positive thing in the sense that teams have license to construct themselves more sensibly. This makes for better basketball (fewer not-very-good, capped-out playoff spot chasers) and it doesn’t (demoralizingly uninterested tank jobs), but it is broadly satisfying to see that nearly every franchise in the league has a plan of some sort. They’re trying to do a specific thing, and failing interestingly (the Thunder’s botched Big Three experiment) or succeedingly depressingly (your 2017-18 and probably 2018-19 Atlanta Hawks) or soaring (Golden State). It’s all reasonably legible.

If there’s a major drawback to this, it’s that we’ve become overly fixated on the youngest players in the league, fetishizing guys who aren’t even good yet just because they might eventually be great and shunting aside players who are in their mid-20s, discussing them, if at all, as if their futures were fixed. Considering empiricist types are the worst perpetrators of this, it’s odd that they would disregard the obvious fact that, like, some players significantly improve later than you might expect: three- and four-year college players who are getting up to speed, players stuck in bad situations early in their careers, players who for whatever reason click with a coach or some teammates and discover a whole new level. It happens.

And it might happen for Kris Dunn, alongside a roster stocked with those type of players: Jabari Parker, Zach LaVine, Bobby Portis, Denzel Valentine. Any or all of those guys could turn a corner this year. It’s unlikely, but then one of the things we like about sports is their capacity to upset our expectations. After watching Dunn as a rookie, we weren’t sure he would do much of anything as a pro. He’s already proven that notion wrong. Would it be so wild if he surprised us again?