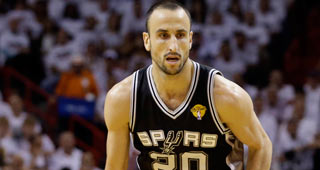 I feel like an idiot sometimes, trying to derive deep meaning from this. Sports can be enlightening, invigorating, seismically emotional, but in the end they are only themselves—evolutionary schoolyard games, people running around, doing what doesn’t need doing in technically impressive ways. If you want to compare them to music or movies, relate them to some historical or personal event, you can, but that exercise, most of the time, is more trouble than it’s worth. You’re watching Devin Booker and thinking about jazz; he’s driving from the top of the three-point line and thinking about nothing so lofty as where the weak-side help defender is in relation to the basket. The key to the comeback, he says in the post-game presser, was that we stepped up our intensity. You struggle to figure out how to put this quote in dialogue with Archie Shepp.

But every once in a while, a remarkable athlete announces himself as an artist. For a particular kind of sports fan, this is an awesome development. Manu Ginobili, who retired on Monday, was such an athlete. Lots of players try cool stuff for the sake of trying it—spinning fadeaway jumpers, one-handed catches, baroquely fancy glovework—but few cop to possessing the vanity that inspires these maneuvers. They talk endlessly, sounding about as bored as we are listening to them, about self-sacrifice and doing everything for the team. They don’t like to admit that they’re sometimes fooling around out there, testing their abilities in hopes of creating a moment that, sure, helps the squad win but also, more crucially, is thrilling to perform and to watch. John Kennedy was more intellectually honest about why the Apollo program existed—”we choose to go to the moon in this decade and do the other things not because they are easy, but because they are hard”—than the average basketball player is about a needlessly gymnastic dunk.

Manu famously told Gregg Popovich, early in his NBA career, before he had established himself, that he wasn’t going to stop expressing himself on the court: “I am Manu. This is what I do.” What he did was sometimes necessary and frequently mind-expanding: dribbling through defenders’ legs, diving into passing lanes, delivering passes from strange and improbable angles. In a game that provides ample space for improvisational genius to operate, Manu used every inch Popovich—with whom he eventually developed an understanding, then a robust friendship—afforded him. He wasn’t ever a franchise-carrying superstar, but he was as charismatic a basketball player as has ever lived, and in his sheer adventurousness, he demonstrated the sport’s capacity to delight more thoroughly than peers who were objectively better than him. He did this intentionally, fancying himself a kind of explorer of athletic potential, and because he’s a happy and humble guy, his audacious flair read more like generosity than ego-tripping. He wanted to show us something we’d never seen before.

Which isn’t to say Manu wasn’t also utilitarian, in his way. He was attacking the same problems as everybody else—how do I get past this guy in front of me?—but did so with a boyish shamelessness that allowed him to regularly attempt what might not work. He had the talent to see the window into which he could deliver a 25-foot bounce pass in transition and the confidence to be okay with it skidding out-of-bounds. What’s discovery without the risk?

He didn’t invent the Eurostep, but he popularized it and in retrospect, it’s a move that explains Manu pretty well: deceptive, flamboyant, and deadly. It’s a trick and a flex, and it works—anecdotally, anyway—every time. As his athleticism faded and he became more of a spot-up shooter than the slasher he’d been in his younger days, his signature move was appropriated, most notably, by James Harden. It says something about how much people love Manu that, for years, Harden’s use of it was often assiduously footnoted. It says something further, about both players, that all the parts of Harden’s game people like are called Ginobili-esque, and everything that they dislike is his own. Maybe Harden represents an inversion of Manu’s principles: inexhaustible craftiness applied cynically, as opposed to craftiness as a product of an overactive imagination.

There was little calculus to the way Manu performed. He worked more like a novelist than an essayist, fascinated with the act of creation—moods and sensations, sudden images, babbling streams of consciousness—rather than coherence or figuring things out. He played wild, metric-agnostic basketball. You got the idea he didn’t care about stats, not in a team-first sort of way, but because he knew that math couldn’t begin to describe him, what he’d done on a given night, the shivers he’d sent through the murmuring crowd as he exploded and hopscotched toward the rim. Manu Ginobili was an artist, or as close as athletes get. I watched him, and it made sense, these connections I was drawing. He was Dave Chapelle riffing, Robert Altman pitching a dream to a studio exec, Stephen Malkmus forgetting the lyrics, remembering, then reconfiguring them on the fly. Put him in the Hall of Fame, put him in the Oscars’ In Memoriam montage when he dies.

Uniqueness—style unparalleled—is one of the few things that endures more strongly than measurable accomplishment. Lots of athletes score, lots of athletes win. A rare, special handful consistently redraw the dimensions of the possible, make you yelp and laugh and gawp soundlessly when they’re cooking, rumble and pulse like a passage from a magnificent author, like a bassline that lives in your blood. That’s eternal, the feeling of being ten times more alive than usual. That’s Manu.