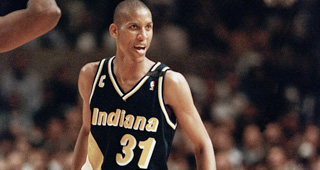 Pacers fans booed Reggie Miller twice in 1987. The first time was at a draft party in Market Square Arena, moments after Indiana selected him 11th overall. The second was at an Indianapolis exhibition against a US amateur squad that was tuning up for the Pan Am Games. Reggie was there because he wanted to play against his UCLA teammate Pooh Richardson, and because he thought the contest would be a good opportunity to show the Hoosier crowd what he could do. This was before he had signed his contract with the Pacers. Both his father and his agent advised him to sit out, fearing he might endanger his payday with a fluke injury, but Reggie insisted on playing. When he was announced in the starting lineup, by his estimation, it was “75 percent cheers and 25 percent boos.” The dissenting voices were silent after he drained his first shot.

The folks hassling Reggie were Bobby Knight acolytes. They didn’t want a black, trash-talking city kid; they wanted Steve Alford, the Nice Young Man who had just finished his senior season at Indiana University as the program’s all-time leading scorer and a national champion. Alford was the target of intense parochial admiration in those days, an Indiana native, markedly successful in high school and college, cornfield handsome with feathered hair and a gleaming mayoral smile. When you look at a photo of 1987 Steve Alford, “Take Me Home Tonight” immediately starts blasting out of the nearest car stereo. In the smarmy bible-thumping armpit of the midwest, where a psychic canyon separates Gary from Chicago, Alford was the finest basketball player the world had ever seen. He got drafted 26th overall.

In terms of talent, Steve Alford wasn’t in Reggie Miller’s zip code. On TBS’s broadcast of the draft, Larry Conley explained that Alford couldn’t hang with NBA athletes: “I don’t want a lot of letters from Hoosierland, but I can tell you, in my opinion, I don’t think he’s ready for the first round… He’s an excellent shooter… but he has to have a screen to get his shot off.” In other words, he was a shorter Doug McDermott, a less lethal J.J. Redick. In fact, he was worse. Alford never really stuck at the highest level, spending four anonymous seasons with Dallas and Golden State before giving up on professional ball to coach at a conservative Christian college in Fort Wayne. (Coincidentally, Alford eventually took over Reggie’s UCLA Bruins. He was fired a little less than a year ago. The Wikipedia entry for his time there consists of two sections: Consecutive Sweet Sixteens and Fanbase Grows Restless.)

Meanwhile, Reggie only went on to All-Star appearances, deep playoff runs, and total ownership of the franchise, embracing Indiana in ways he absolutely didn’t have to. He settled in downtown Indianapolis when it was an urban husk, made regular surprise visits to local schools, and donated his time and money to the Riley Children’s Hospital burn unit. He pretended to hate the coasts, taunting Spike Lee during playoff games and dismissing the town he grew up an hour away from—”it’s Los Angeles: Evian, cafe latte, all that crap”—in the middle of a Finals matchup against the Lakers. He had plenty of opportunities to leave for bigger cities or better teams, and he almost did after some cretin burned his house down in 1997, but he had a solid relationship with Donnie Walsh and genuinely believed in building something memorable with the Pacers. Of all people, John Cougar Mellencamp gets it: “[Reggie] did a lot more for Indiana than Indiana ever did for him.”

This isn’t to say that Reggie Miller’s career was thankless, some ignorant passel of hayseeds responding to the sharpest shooter of his generation with grudging applause. It wasn’t easy though. The fans had scoffed at the team’s first round selection of Chuck Person in 1986, just as they did Reggie’s the following year. “But when Indiana makes the No. 2 overall pick Tuesday,” UPI’s Jim Slater wrote before the 1988 draft, “onlookers likely will cheer the acquisition of the rebounding help the team had promised would come two seasons ago.” He’s talking about Rik Smits, who turned out to be a strong presence in the Pacers’ middle for many years, but is also, you might notice, a white guy from the Iowa of Europe.

There’s a racial aspect to this, as there always will be when a fanbase is overwhelmingly Caucasian in a state that that usually votes red. Indiana didn’t take to Reggie right away, not like they would have in Chicago or New York. He had to win games and pander. In 1998, when the Pacers were facing the Knicks in the Eastern Conference Semifinals, Reggie told the Daily News “[With the Pacers], you’re playing for a whole state. Just to see people in overalls come up to you and say ‘go get them boys.’ I like that. I like my chances with this little hick team.” The image Reggie provides is more evocative of the Clampetts than Indianapolis in the late 90s, but he has a propensity for bizarre embellishments. The point is he raved about Indiana to out-of-town press all the time. He was its great and goofy ambassador.

“I want to do what guys like Magic and Larry have done,” Reggie told Sports Illustrated, after signing a six-year extension in 1991. “I want everyone to know who the Pacers are.” He got there, in his way. The Pacers became Reggie Miller, and everyone knows who Reggie Miller is. They remember his shooting and showmanship, his playoff scuffles against the Knicks, his failed but valiant blitz of the ‘98 Bulls. They, um—he calls games on TNT and people are aware of it. For all the time he’s spent in front of a microphone, he’s never had a bad word to say about where he played and he’s never amplified any of the unfair criticism he received. He’s mentioned Steve Alford only as many times as someone else has brought him up.

Reggie’s a complicated figure, difficult to place in the hierarchy of NBA greats and difficult to describe as a personality. But if there’s something to admire about him beyond his athletic ability, it’s that he really was as tough as he claimed to be. You couldn’t say anything to him that he wouldn’t shoot a clean jumper over. He’s like Indiana’s loftiest basketball saint, Larry Bird, in that respect. He has his own agenda, and if that means loving you when you don’t love him back, that’s just a minor inconvenience. Reggie was determined to become a hero for people who didn’t know they wanted him. He took that premise as far as it could go, right up into the rafters.