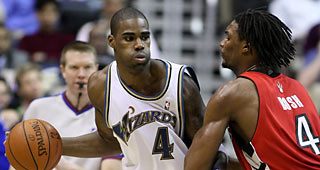 I swear I saw Antawn Jamison strike somebody. The image springs from the dim recesses of childhood memory, a 19-inch Magnavox humming at the foot of my parents’ bed. Jamison and Vince Carter’s Tar Heels were playing Andre Miller’s Utah Utes in the 1998 National Semifinal, and they were getting destroyed. This was the year after Dean Smith had retired. Longtime assistant Bill Guthridge was babysitting while Chapel Hill brass identified a long-term successor, and Uncle Gut wasn’t really up for the job. The Heels were immensely talented, but minimally instructed and thus pretty easy to contain: move the ball patiently, sprint back on defense, and you had a decent shot to come out on top.

This being college ball, nobody figured that out until the penultimate game of the season. Just in time, Rick Majerus’s deliberate, set-heavy oh-fense scrambled the Heels, and when it didn’t, Andre Miller, at that age moving like a spry 32-year-old, drove past Ed Cota and created something good. It was frustrating to watch if you were a Carolina fan. (My aunt and uncle are both Chapel Hill profs; I was invested.) Carter heaved ugly jumpers and Jamison struggled to post up Michael Doleac. The game swiftly got out of hand.

And then I remember a replay, let’s say about halfway through the first half, when the margin was already in the double-digits: Jamison loses a rebound battle, probably against Doleac, and as the action travels away from the two big men, Jamison briefly takes Doleac in a headlock and whacks the top of his skull. Billy Packer talks over the clip. You hate to see that, or something to that effect. The refs apparently don’t notice it. Jamison isn’t penalized and the game continues toward its obvious conclusion, but there lingers, like a loud bang you can still feel after the sound dissipates, the imprint of something having gone strangely, bloodily mean.

This didn’t happen, I’m now almost certain. I’ve rewatched most of the game, and while there aren’t replays on the YouTube cut, there don’t appear to be any moments when Jamison and Doleac—or Hanno Mottola, or Alex Jensen, or Britton Johnsen, or anyone else who looks like a Plumlee uncle—get tangled up behind the play. No contemporary newspaper report I can find mentions the incident. It would’ve been wild if the best college player in the country had assaulted an opponent in the middle of a huge game and nobody had anything to say about it.

I’m telling you this because it’s something I’ve been trying to excavate from my brain for a long time, and also because I have always wanted Antawn Jamison to be better than he actually was, or failing that, perhaps angrier or otherwise more upset with the emptiness of his accomplishments. He went fourth overall in the 1998 draft, and though you can’t say he had a poor NBA career, it was an obliquely disappointing one: five years on flatly terrible Warriors squads, a single moderately successful season in Dallas, five more years on middling but quite fun Wizards teams, and then two unsuccessful ring-chasing spells in Cleveland and Los Angeles. Two All-Star teams, a million oddly angled and faintly stupid 13-footers, and zero memorable playoff moments. Vince was drafted right behind Jamison, and the first four years of his (improbably longer) career obliterate all 16 of Jamison’s. The vacantly decorated forward just didn’t move the needle.

You can pick out almost any point in Jamison’s career and call it emblematic, because it was approximately the same all the way through, but the Antawn Jamison who lives in my head is a Wizard. It’s platonically correct: the off-gold and dull electric blue, Eddie Jordan on the sidelines, Juan Dixon coming off the bench because Michael Jordan watched three games of him in the NCAA tournament and decided that he was a winner. That’s Jamison’s milieu.

His first season in Washington, he played alongside Gilbert Arenas, who came out of nowhere and started scoring like Diet Iverson, and Larry Hughes, the sort of junky guard—described as a slasher because he was a good athlete, a defensive stopper because he got steals, overrated because he was so damn exciting—who turns a 45-win season into something special. Jamison added what he was expected to: about 20 points, about eight rebounds, and moderately lousy defense. In four losses against the Heat in the Eastern Semis, he shot 42.9 percent and got outrebounded by Eddie Jones.

Analytics types will tell you that scoring is the most easily replaceable thing on the floor. If you remove one prolific but not terribly efficient scorer from a team, another prolific but not terribly efficient scorer will emerge. You can’t make up for the loss of Steph Curry, but if DeMar DeRozan goes down, it’s not as big of a problem as it might initially seem. I don’t like this theory mostly due to sentimental attachments to gunners like Monta Ellis and J.R. Smith, but it’s likely more correct than not, and I’m most convinced by it when I think about Antawn Jamison.

The stat monks already tried to bury Carmelo Anthony—which is wrong. If they had been around when Jamison was chucking, they would have melted him in the earth’s mantle. Jamison was an antecedent to Melo’s tough shot hardliner style, except he wasn’t nearly as talented. Announcers marveled at the creativity with which Jamison got his shots off but largely ignored that not many of them went in. It was kind of interesting craft—Jamison relentlessly practiced leaning jumpers and demi-hooks and flip shots he could launch everywhere from his sternum to his eyebrows—but not as interesting as, say, anything that circa 2005 Gilbert Arenas was going to do with the ball. If you cared about the Wizards, you wanted Jamison spotted up at the three-point line. Once he started to drift inward, a familiar dyspepsia set in.

Jamison got a pass from the media in part because he was a genuinely kind man, but as Tom Scocca pointed out while Jamison was living out his dismal last days with the Lakers, his polite demeanor was not the same thing as leadership. He didn’t command the locker room, or noticeably boost his teammates’ confidence. His Warriors sucked, the Cavs for which he was supposed to be the final piece belched smoke in the postseason, and most famously, the Wizards were swiftly dismantled by a 2009 catastrophe in which Arenas got in a tiff with Javaris Crittendon, brought several guns into the locker room, and told Crittendon: “hey, MF, come pick one. I’m going to shoot your [blank] with one of these.”

Shortly after that happened, but before he was suspended by the league office, Arenas jokingly shot up his teammates with finger guns in a pregame huddle. Everybody involved, Jamison included, was pictured laughing. It was a whole thing—a disgrace, in the words of every long-tenured columnist breathing. After David Stern hit Arenas with an indefinite ban, Jamison offered an impressively blame-eliding oncourt apology in which he talked about how that behavior wasn’t what the Wizards were about, despite the fact it very much was what they were about, because it’s what they did. As Scocca righteously put it: “do not trouble yourself with the facts, people. I don't like the facts any more than you do. Let us move beyond the facts, to agree we would both prefer other facts. It's almost as if those other facts are true!”

It’s not surprising that Jamison could ably employ this type of obfuscation. He was, after all, the product of it. What the point of Antawn Jamison truly was, the depth of the mark he had left on the game, is a question that remains unsatisfactorily answered even five years into his retirement. The best analysis I can muster is citing Patrice O’Neal on Charlie Sheen: he sucks, but he’s good, but he sucks.

Put another way, Jamison was a perfectly fine player who wore the flimsy mask of a superior self. Certain people—maybe you were one of them—built him up, based on what he looked like, if you squinted, or by granting him intangibles he didn’t actually possess. He existed in the shadow of this false characterization. Most of the things he did occurred only in the imagination, or in the box score’s sophistic columns, while you weren’t paying proper attention. There was, stubbornly with Jamison, the constant suggestion that he might surprise you, a vivid memory that he had in the past, and then as his handsome face deflated in that familiar way, you’d realize that what you were dreaming had never happened, and never would.