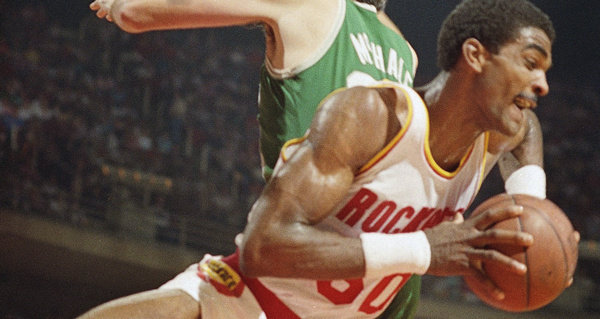 Ralph Sampson was coming off three really good seasons, one by himself and two beside Hakeem before Dream picked up the H. It wasn’t perfect success—the Rockets were abysmal when he won Rookie of the Year in ‘84, and he had a hellacious ‘86 Finals against the Celtics—but Sampson had been called, for a while by that point, the future of the sport, a lithe sapling of a man who could dribble the ball between his legs and reliably convert 20-footers. The future was beginning to arrive. He and Hakeem were young, all-world talents who fit together well. They would figure out how to dominate eventually, even against Magic and Kareem, Bird and McHale. 1987 might be their year.

Instead, Ralph came apart. His hip was sore; his knee was torn up. He ran like a car struggling to get to a service station on a blown tire. His coach didn’t believe in him. Traded to Golden State, traded to Sacramento. False hope. Long workouts and ice baths and DNP - CDs. He was spent at 28 and out of the league by 31. Sampson was Hakeem’s mercurial twin, and then he was nothing.

We’ve never gotten a satisfying answer as to why, because injuries are never a satisfying answer, and because throughout the waning years of Ralph’s career he appeared to be carrying a wounded soul. By the time he landed in Oakland in 1987, GM Don Nelson knew he was getting damaged goods. Sampson had a terrible fall in the spring of 1986. He went up for a rebound against the Celtics and, sandwiched between Kevin McHale and Scott Wedman, flailed and came down flat on his back, smacking his head against the Garden floor. They took him out of the building on a stretcher. One of his arms was trembling, as if animated by a marionettist, while the rest of him remained still. He lost all feeling in his right leg for a while. “He didn’t say anything, you could see he was scared,” teammate Robert Reid told reporters in the aftermath. Sampson walked out of Boston Hospital five hours later, and the doctors said he was okay, but the incident seemed to upset him like a torrent does a riverbed. When the trauma was over, certain things weren’t in the right place anymore.

The following season, he was below par even before he screwed up his knee against the Denver Nuggets in February. “[I came back] too quick,” Sampson told Jonathan Abrams in 2012. “These days, guys would have stayed out a year. But I wanted to play. I thought we had an opportunity to win and I did what I had to do at that point of time.” He returned to action at the end of March and didn’t play anything like himself for the rest of the regular season. He actually performed pretty well in the ‘87 playoffs—nearly nine rebounds per night and 18.6 PPG on 51.4 percent shooting—but the Rockets got knocked out in the second round.

This isn’t where Sampson’s career ends, but it’s all misery from here. The contemporary reports available for perusal in 2019 are grim. Headline, November 1988, Los Angeles Times: “He’s Not Kareem And He’s Not Akeem. He May Not Even Be Somewhere In Between.” Headline, December 1989, Sports Illustrated: “No Legs To Stand On.” Everything written cites Sampson’s aloofness, but also mentions that he works really hard and his teammates like him. Everything, increasingly as you move forward along the timeline, voices pity. Poor Ralph, his body’s giving up on him.

There’s frustration too, though that was there even before anyone knew Sampson would have his career drastically shortened by injuries. Red Auerbach asked him to come out of school after his stellar freshman year at Virginia, but Ralph stayed and got his degree. Bill Fitch implored Ralph to play more like a traditional center, but Ralph wanted to handle the ball and shoot from distance. Assorted natterings from coaches and crusty basketball men lamented that Sampson had an array of good post moves rather than one great one; they claimed his bountiful talent wasn’t properly realized. He was painfully shy, which critics mistook for the absence of a competitive edge. And he wasn’t what the press built him up to be, some impossible hybrid of Wilt and Magic. An SI piece from his rookie season explains in proto-Baylessian fashion how Ralph underwhelms: “after 39 games in the pros, Sampson isn’t anything we haven’t seen before, just a bigger version of it.”

You get the sense Sampson, if he had been designed by NASA engineers rather than a cruel god, still would have ended up as one of the great Yeah, But guys of his generation: an immensely gifted, lightly snakebitten antecedent to Vince Carter and Chris Webber. He might have won titles alongside Hakeem, who had that something killerish Ralph lacked. The what if game is a shallow exercise. It’s sportswriters daydreaming, which is what they’ve been doing with Sampson since he started to lose it.

Reality tends to be much richer, and in this case aggressively tragic: by the time the Rockets won their first of two consecutive championships in 1994, the dilapidated big man hadn’t seen an NBA court in three-and-a-half years. He was 34. The horizon-spanning green spread before him when he graduated from Virginia and walked into the draft as the first overall pick had long since burned off into a lifeless dusky gray.

Some people have all the luck and some people catch a cold every time they set foot on an airplane. Some are enduring and others merely prodigious. They crumple to the ground mid-sprint and their legend, a shadow taking leave of its object, goes running off into the bush. How do you explain that? Some people are just fragile. Like Ralph Sampson, who never got to live in the future everybody else dreamed up for him. He probably had a few notions about it too.