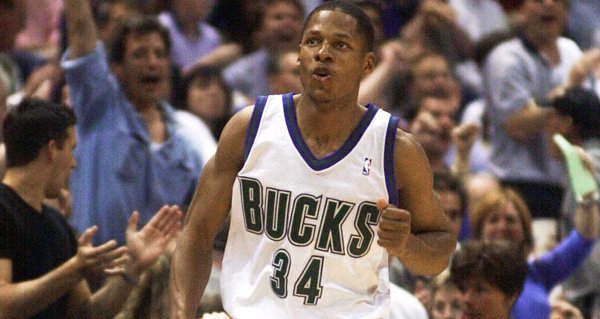 Nothing lingers like the sense that you got screwed. It’s an insistent pang. If in a story you can be the hero, the victim, or the failure, then victimhood is at least the second-best option. You were right there, you did everything you could, and it wasn’t enough due to circumstances beyond your control. Somebody else’s malice or incompetence, a system that didn’t want you to succeed. This gloss on things allows you to explore the painful past protected by a kind of shame-proof radiation suit. It is a way of living with yourself. It doesn’t really matter if it’s rooted in fact or not, but perhaps it is.

Ray Allen probably remembers the name of the waiter who brought him watery chowder in the spring of his sophomore year at UConn, so of course he dwells on the officiating in the 2001 Eastern Conference Finals against Allen Iverson’s Sixers.

“I don’t know if they were manipulating it,” he told the Sporting News during the promo blitz for his biography last year. “It just seemed like [the calls were] not going in our favor. It's hard to understand now, it was so far in the past, what the tone was. But [the Sixers] had the Sixth Man of the Year, they had the MVP, they had the Defensive Player of the Year. We were the lowly Milwaukee Bucks. Small market, everyone always was talking about ratings, the ones we did not draw that much of.”

2001 was a strange time for the NBA. It was right in the middle of the interregnum between the Jordan era and the talent explosion that began with the 2003 draft, when LeBron, Carmelo, and Wade entered the league, followed shortly thereafter by Dwight Howard, Deron Williams, and Chris Paul. The balance between the conferences was even more out of whack than it is now. The Lakers were dominant, the Spurs and Kings were really good, and the East was a contest to see who was going to get stepped on by Shaq at season’s end.

The Bucks might have been the finest competition their conference had to offer in 2001. Their big three, such as it was, consisted of an awesomely smooth Ray Allen, the Big Dog at the peak of his powers, and Sam Cassell, celebrating his second millenia of being 31 years old. Lindsey Hunter was their backup point guard and they rounded out their rotation with frontcourt miscellania: Tim Thomas, Ervin Johnson, Scott Williams, Darvin Ham, and Jason Caffey. This was a George Karl team, so they scored plenty—first in the league in offensive rating that year—but they were far from a powerhouse.

Neither were the Sixers they faced in the Eastern Finals. It was a banged up Allen Iverson and a bunch of roadies. The second leading scorer on the squad was a 34-year-old Dikembe Mutombo. Eric Snow fractured his ankle during their playoff run and it was a genuine problem.

Looking at the series numbers, the Bucks have a strong case that they got hosed by the refs. Over the course of seven games, the free throw count was 186 to 120 in Philadelphia’s favor. The Bucks got hit with 11 technical and four flagrant calls. Glenn Robinson, who averaged four freebies per contest that season, didn’t get to the line until Game Five. Some of this can be explained by simple team stats—the Sixers were fourth in league in free throw attempts drawn and best in the league at not giving them away, and the Bucks were poor (25th and 24th, respectively) in both categories—but the lopsidedness of the flagrants and techs suggests that one side was given considerably less rope from the officials than the other.

Some Bucks fans point to Game 7 as an indication that the fix was in. Scott Williams was suspended for that one due to a retroactive flagrant call upgrade from the league office. (The short of it: Williams planted an elbow right below Iverson’s throat early in Game 6. Tossing him would have been a fine decision but to change the punishment after the fact was unnecessary.) The Bucks shot as many free throws (19) as Dikembe Mutombo did by himself. It’s insidious-seeming stuff, but there’s more to the story. Iverson went for an uncommonly efficient 44 points. The Sixers turned the ball over just five times. Milwaukee lost by 17. If they weren’t beaten fair and square, they were still beaten so thoroughly that it’s hard to argue, even with a few more favorable calls and Grit’n’Grind Charlie Villanueva in the lineup, that they would have played well enough to overcome Philadelphia.

Game 5 stands out as the point in the series the Bucks can most justifiably get upset about. Milwaukee came out firing and had built an eight-point lead by the end of the first quarter. Rewatching the game on YouTube, in the midst of a 12-2 run midway through the second period, you can feel the leash begin to tighten around them. A soft whistle on an Iverson drive. An even softer one on a missed Mutombo lay-in. A third call where Eric Snow’s putback attempt terminates in Ervin Johnson’s chest and for some reason that’s Johnson’s fault. (No, Not Magic walks away shaking his head.) It’s only five points in a little over two minutes, but it halts both the Milwaukee offense and the game’s rhythm. The Sixers catch their breath.

The Bucks simply fall apart in the second half. They take a ton of difficult shots. Iverson can’t hit anything, but Mutombo is killing them on the offensive glass. (He also thrillingly drains a pair of sky hooks.) Arguing a clear foul, Cassell says something nasty to Bennett Salvatore in front of the Milwaukee bench. When he gets T’d up, George Karl doesn’t even argue. The score is tied heading into the fourth quarter, and from there really neither team plays well, but Eric Snow makes a couple buckets in the final minutes, Robinson misses an open baseline jumper at the end, and that’s the difference. There’s a world in which the Bucks have a 20-point halftime lead in Game 5 and cruise to victory. That wasn’t allowed to happen.

Whether that was on purpose or otherwise depends on your rooting interests and willingness to believe in David Stern’s puppetmaster proclivities. Allen, after the Sixers went up 3-2: “I think there’s no question [we’re not getting calls]. The league, as a marketing machine, the bottom line is about making money… the league knows that Philadelphia is going to make more money with L.A. than we would with L.A.” He felt short-changed both in the moment and with nearly two decades to think about it. Of course, the injustice done to the Bucks wasn’t as egregious as what would happen on the other side of the bracket the following year, but it still stank, either conspiratorially or in the way a close-run loss does.

They would have lost to the Lakers. If an aging Mutombo gave Milwaukee trouble, Shaq would’ve been wearing Ervin Johnson as a hat by the end of Game 2. This is not the point. The reason Ray Allen is still making insinuations about the referees and the league office all these years later is not that he had an NBA title taken away from him but that he remembers the sensation of his agency slipping away in the most unpleasant manner. Team sport athletes aren’t completely autonomous. They’re used to losing because an opposing player goes stratospheric, or because their coach can’t draw up a decent play at the end of a game. But they rage against refereeing because it’s like being held down by some cosmic force. Wait, the rules are against me now too?

It could be that somebody important didn’t want the Bucks in the NBA Finals. This was the simultaneous height of both the Tim Donaghy era and a period in which Stern was governing the league like an imperious parent.  If you’re Allen, or a wounded Milwaukee fan, it makes you angry to think about. But maybe that is better than feeling forlorn. It’s something to hang onto, the idea that you were wronged. Your grimly flowering outrage creates the illusion of some alternate, morally correct version of history, in which you are a little more fulfilled than you are now.