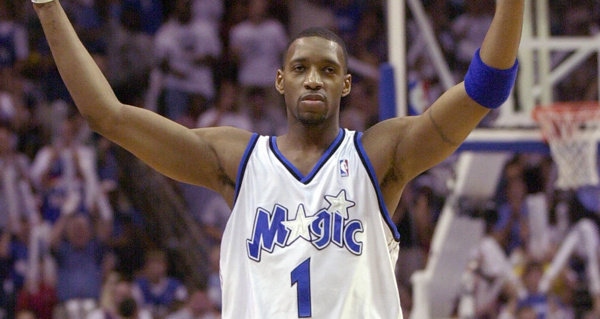 Who knows why rich people do anything. When Rich DeVos moved John Weisbrod into the Magic’s vacant general manager position toward the end of their dismal 2003-04 season, the 35-year-old Harvard grad’s qualifications for the gig pretty much started and ended with doing some fine scouting work for DeVos’s minor league hockey franchise and piloting business operations of said hockey franchise when the IHL folded and the Orlando Solar Bears ceased to exist. If the hire didn’t make much sense, it didn’t have to. DeVos knew and liked Weisbrod, and that was enough—not to make him a competent basketball executive, of course, but to grant him the opportunity to founder in a job he didn’t even seem to want.

Here’s a March 2005 quote from Magic CEO Bob Vander Weide wherein he tries to compliment Weisbrod while twice implying that he’s kind of a blustering trainwreck: “John’s intense and he will still make his share of mistakes, but he has a nice blend of people skills. I want to see him be a great general manager for 20 years, so he’s got to chill out a little, but he’ll learn it.”

He did not learn it. He resigned two months later and joined the Dallas Stars as a regional scout.

Weisbrod’s name might stick out among a hundred other swiftly failed and forgotten GMs because he was in charge of the Magic when they traded Tracy McGrady to the Houston Rockets for Steve Francis and Cuttino Mobley, and because some maniac threatened his life over it. In June of 2004, as rumors about McGrady’s exit were circulating, Weisbrod found a menacing note taped to the front door of his home. He thought little of it, changed into his dinner attire, and drove to a restaurant to meet with Emeka Okafor, whom he was thinking about taking first overall in the upcoming draft. Two weeks later, on the day the deal was formalized, the aggrieved fan struck again, this time physically writing on a glass door with grease pen. That spooked Weisbrod enough to notify the sheriff and check into a hotel for a couple nights. “I guess this is kind of par for the course,” he told Florida Today. “The trade was an emotional issue and a public issue, but really you wouldn't think it would have gone this far. But I guess there are always going to be wackos out there."

This was the discomfiting coda to the total dissolution of the Tracy McGrady era in Orlando. Four years earlier, the Magic nearly had themselves one of the best summers in league history: McGrady, Grant Hill, and Tim Duncan all lined up and as excited to be in central Florida as anybody over the age of nine could be. The Duncan maneuver fell through, but McGrady and a 28-year-old Hill—coming off a ridiculously productive final season in Detroit—still represented an impressive haul for a franchise that hadn’t accomplished much of anything since Shaq fled to the Lakers. “Once Grant and I get here, this will definitely be the city,” McGrady told the Orlando Sentinel. “The East is locked up.”

That wasn’t an unreasonable claim, except for the fact that Hill’s foot was about to disintegrate. On his way out of Detroit, carrying a mediocre Pistons team to a seven-seed, Hill picked up a left ankle injury that he was encouraged to play through. Speaking with Jason Whitlock in 2011, Hill revealed that “certain team doctors were questioning whether I was really hurt, thinking I was soft or whatever.” Turns out the damn thing was fractured, which Hill found out only after pulling himself from the middle of an opening round loss against the Heat. “When I found out I had broken my ankle, as crazy as it sounds. I was relieved. I finally had proof that I’m really not making it up.”

The Pistons medical staff indirectly doomed the Hill & McGrady Magic. Hill played just four games during their first year together, 43 over the next two seasons, and he didn’t see the court at all when Orlando fell apart completely and McGrady told Weisbrod and Vander Weide he wanted to leave. By that time, T-Mac had given four spectacular years to the Magic, winning a pair of scoring titles while headlining .500-ish squads that were appointment viewing solely due to the possibility that he might melt the opponent by himself. He was his generation’s James Harden, playing big old pop riffs where The Beard now composes antiseptic sonatas, escaping Vince Carter’s expansive influence in Toronto and immediately exploding all expectations of what he could do. If Hill hadn’t been laid up on cement blocks, he and McGrady really might have locked up the East for a while.

Where some saw insufficiently supported genius, Weisbrod saw only selfishness and temperamentality. When he was hired, he proclaimed that the Magic were “out of the prima donna development business,” clearly a barb at McGrady. This was superficial, no nonsense Hockey Man stuff, the sort that excites columnists who transparently hate the athletes they cover. (The Orlando Sentinel’s Mike Bianchi: “Weisbrod may not know the inner workings of the pick and roll, but he knows about toughness.”) It also alienates players and is almost always bombast covering for incompetence. Whether Weisbrod couldn’t read the room or was trying to downplay the talents of the franchise cornerstone he already knew he was going to lose, he came off paternalistic and petty. “[A] superstar is defined by wins, by making the players around him better,” he said shortly after sending McGrady to Houston. He did not then go on to list all the obvious ways that T-Mac failed to turn Keith Bogans and Andrew DeClercq into worldbeaters.

McGrady’s five seasons with the Rockets were a minor disappointment, not due to any fault in his character, but because knee and back problems reduced him to a jump-shooter, and then a washout. He was cooked by age 30. He peaked early, and what seemed like a false start with the Magic turned out to comprise the majority of his prime.

Where most stars enjoy four or five distinct phases of their career, T-Mac got about two-and-a-half, and bad luck followed him around like a slasher villain. Hill was a non-factor in Orlando. Yao Ming had trouble staying upright in Houston. If McGrady had remained in Toronto, he would have experienced Vince’s premature decline. A serial victim of circumstance, by the time he made the second round of the playoffs he was totally useless, an end-of-the-bench guy for the title-losing 2013 Spurs, not scoring a single postseason point in 31 minutes.

There are few instances along the truncated timeline of Tracy McGrady’s playing days in which he got what was coming to him. He didn’t retire until after no NBA team wanted him anymore, and even then, he framed it rather unconvincingly as a choice: “I’m young enough to still play. My body feels good; I haven’t played in a couple of years so my body feels great.” When he pitched a few minor league baseball games in 2014, it was a fun diversion—he was a gifted hurler in high school—but also slightly sad, a broken down athlete trying to find a feeling long escaped.

If there is any consolation in snakebitteness, it is knowing that the best moments came from you, that you were the electricity pulsing through a structure that was leaning, tremoring, melting at the joints. You can’t fight entropy and win, but you can strain against it for a while. Maybe in time, that titanic and futile effort finds the appreciation it deserves.