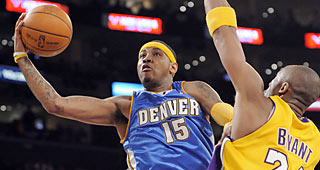 There wasn’t anything unreasonable about Carmelo Anthony leaving Denver for New York. There is, for better and for worse, nothing like being a Knick, and that’s what Melo wanted for himself. And besides, the Nuggets’ project had gone a bit stale. He and George Karl were five-plus seasons into what was not exactly a friendship. Masai Ujiri had recently taken over as general manager and was ready to turn over the roster. “If I do nothing now, I'm never going to do anything,” Melo said in October of 2010, a few months before Ujiri moved him for an assortment of role players it turned out the Knicks would sorely miss. Melo didn’t achieve anything of note in New York, but that wasn’t the primary purpose of going there.

That he elected to re-sign with the Knicks in 2014, after he was already comfortably acquainted with ownership’s avant garde brand of dysfunction and when he knew the franchise wasn’t going to compete for titles, only reaffirms that the switch was a fine decision, according to the particular rubric he was using. Melo’s ambitions were to live in Manhattan, play in the Garden, and make a lot of money. Every athlete wants to win, but not everybody makes it a priority. Melo served his best interests and accepted the mediocre basketball that went with it.

We complain often about players trapped in bad situations because they get drafted by or traded to a lousy organization, but Melo did the opposite to himself. The Nuggets have had pretty smart management over the past 15 years, and they put some solid teams around him while he was in Denver. The most interesting one was the 2007-08 squad that featured Allen Iverson and Marcus Camby, both of whom were just past their primes. Iverson and Melo sharing the court for a full season was something of a torch-passing moment: one generation’s great lamented scorer coinciding with the next one’s. It’s fitting that they both averaged 25-plus per night, won 50 games together, and were promptly swept in the first round by the Lakers.

The best iteration of Carmelo Anthony’s Nuggets, the one that was snug in all the right places and nearly made the Finals, came the following year, when Iverson was sent to Detroit for Chauncey Billups. Melo had kind of a rough regular season—he broke his hand in January—but he was clearly ready to take ownership of the team. In this respect, Chauncey was a better fit than Iverson as his second-in-charge. Those Pistons who won a title in 2005 were stagnating—they were firmly the third-best team in the East behind the defending champ Celtics and LeBron’s Cavs—and the 32-year-old Billups was pleased to return to his hometown and play sidekick to an emerging superstar. (And not for nothing, Iverson was right on the brink of falling off hard.)

Nene replaced Camby as the Nuggets’ starting center and Birdman Anderson came off the bench to swat shots and throw down dunks in the Brazilian’s stead. J.R. Smith was poised for a career year. Kenyon Martin was around to tussle in the post and dish out dirty picks.

The best teams in the league don’t often realize the gifts of every player in the rotation, which is to say basketball is not arithmetic. Some players typically have to take a step back and do slightly less than they’re capable of. Ray Allen proved he was a devastating all-around scorer in Milwaukee and Seattle, but he was essentially an overqualified catch-and-shoot guy in Boston. The past few years of Warriors teams didn’t make the fullest use of their four stars because there simply weren’t enough minutes and touches for everyone to shine simultaneously. The 2007-08 Nuggets used all of their talent—which turned out to be a little bit less than they needed. Melo had free rein to do whatever he wanted, and then everyone else filled a role. Chauncey controlled the offense and kept the lesser lights involved. J.R. came off the bench firing. Linas Kleiza either shot threes or made straight line drives to the basket. Anthony Carter was a perfectly cromulent backup point guard. And so on.

Unusual for a George Karl squad, the Nuggets were nearly elite defensively, and whether it was some small bit of growth in their relationship or Karl admitting defeat, he finally stopped riding Carmelo so hard and accepted him as the brilliant, lightly infuriating bucket-getter that he was. Melo has never really required the faith of his coach, because as Mike D’Antoni learned in New York, he’s going to play the way he’s inclined to no matter what, but it does help, if only in terms of not needing to waste any psychic energy, when you’re not actively clashing with the guy barking from the sidelines. During LeBron’s second stint in Cleveland, the Ty Lue for David Blatt swap wasn’t replacing some doofus with a strategic genius, but Lue was considerably easier to deal with. He knew how to marshal the team while staying out of LeBron’s way. It’s not a coincidence that the Cavs took off under his deferential brand of leadership.

Empowered and in the bloom of his athletic prime, Carmelo destroyed the Mavs in the playoffs. Perhaps it speaks poorly of Melo’s career that his finest postseason moments came against a 50-win team in the Western Semis, but there was an argument-muting aspect to him when he was hot. Just shut up and watch me work. He becomes this overwhelming confluence of abilities—shooting touch and footwork and ridiculous strength and speed for his size—and something dark takes root in the defender’s mind, a demoralizing sense that you can play him perfectly and it’s not going to matter. It’s an unsustainable peak, yet he believed he could reach it every night, and this inconsistency matched with his outsize self-belief is what persistently doomed Melo in the end. But it was really something to behold, when he was hitting threes, getting to the rim, and draining everything in between. He scored 30 a night against Dallas and shot 50 percent from the field, winning Game 3 by himself with a crunchtime dunk and a hideous triple that splashed through the hoop with one second left on the clock.

His jumper let him down against the Lakers in the Conference Finals, which was a shame because the Nuggets had a genuine chance to beat Kobe, Pau Gasol, and Lamar Odom. They could have easily been up 3-1 heading into Game 5. Instead, the Lakers pulled away and finished them off in six.

Carmelo turned 25 on the day the Nuggets were eliminated. He’d shot 6-for-17 in a blowout loss. We couldn’t appreciate it at the time, we lacked the perspective to do so, but that was the end of Melo’s only deep playoff run, and it was nearly the end of him in Denver. They ran it back the next season, with diminishing returns, and then he was a Knick midway through the 2010-11 season.

As much as lighting up Madison Square Garden represented the fulfillment of lifelong dream for Melo, it was also his mausoleum. He was only ever irrelevantly spectacular there. New York used up his prime, and then he became a deteriorating nomad. To coin a phrase: he might have retired when the Rockets cut him last year, he’s just walking around not knowing it. There’s almost nothing left for him to contribute. His career might be all the way over.

Maybe if he had stayed in Denver and been patient, Masai Ujiri would have stuck around too and constructed a new-look contender in which he could thrive. (Masai’s demonstrated a gift for that.) But what athletes want and what would be pleasing to see, for those of us watching from the couch, are occasionally two different things. The Nuggets gave us a glimpse of what Carmelo could have been, and then he decided to become something else. Good for him, if not for the rest of us.